The Tata Kite 5 compact sedan has officially been unveiled at the 2016 Indian Auto Expo and has us impressed by its good looks. Read on to know what we think about this new car. 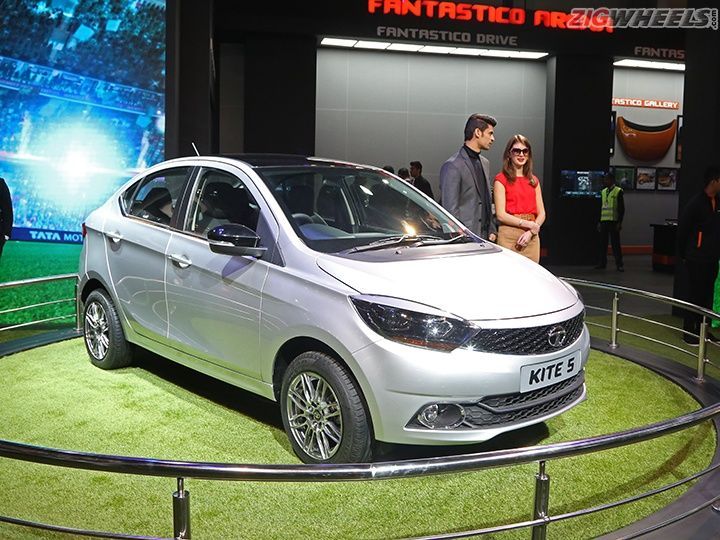 The Tata Kite 5 sedan is a brand new car from the Tata Motors stable and is essentially based on the Zica hatchback. The Zica (which will be renamed soon), and the Kite 5 (Update 9/02/2017: model now called Tata Tigor) will essentially be a part of Tata’s new offensive for the year 2016 where it aims to get back its falling sales figures and more importantly, the trust and perception of the Indian public. So lets dig a little deeper shall we...

For starters, the Tata Kite 5 is possibly the prettiest compact sedan in the country today. The combination of the Zica’s good looking front and a really well styled rear end give it a modern and forward thinking look which is high praise when it comes to Tata’s design and styling. The Kite 5 will get the large black grille in the front with hexagonal slots that get smaller towards the headlights just like in the Zica. The Kite 5 will also get the same basic headlamps as the Zica but with projector headlamps and a daytime running light option in the top of the line car. But it is the rear of the Kite 5 that really makes an impression on us.

The well styled boot curves fuse well into the C-Pillar and so does the boot lid which has a ton of styling details. For starters the horizontal cut and contour in the bootlid and the slim tail lamps combined with the sporty bumper add a lot of character to the Kite 5. We also like the subtle spoiler that has been incorporated on the roof of the Kite 5 with a large LED brake light giving the car a very modern euro look to it. The wheels on the car showcased here too look great however they are not a production ready set. Expect to see something similar to the multi spoke ones on the Zest when the car actually makes it to production.

On the interior front, the well made dashboard of the Zica is shared with the Kite 5. The centre console is well styled and is finished in gloss black with a silver outlining. The Kite 5 does not get a non-color screen like the Zica but instead gets the same color touchscreen unit that you get on the Bolt and the Zest. Of course, the surrounding panel on the car is different from the Zest and the Bolt. The seats too are well crafted and are quite comfortable but just like the Zica lack under thigh support.

When it comes to leg space, few manufacturers beat Tata Motors. The Kite 5 is not only more spacious than the Zica is at the back, we think it could be the most spacious compact sedan in the country when it gets launched. The Kite 5 will also have the biggest boot in the compact sedan category with about 450-litres of storage space available.

On the engine front, the Kite 5 will get two brand new engines that have been made in-house by the Tata Motors engine works and will also feature on the Zica hatchback. The Kite 5 will get a 1.2-litre petrol engine that makes 85PS of peak power and about 114Nm of peak torque. The diesel on the other hand will be a new 1.0-litre turbocharged 3-cylinder unit that will make 70PS of peak power nad 140Nm of peak torque. The diesel will also get an AMT option which will be a 5-speed unit based on the same 5-speed gearbox that both the petrol and diesel cars will also get. Expect range topping fuel economy from both the petrol and diesel engines when it goes on sale later this year.

And taking about going on sale, the Kite 5 compact sedan will be the third car that Tata Motors will launch in 2016 and is expected to make its debut in the second half of the year. The Kite 5 should be priced extremely competitively and could seriously shake up the market if Tata decides to price it anywhere under the Rs 4.5 lakh mark for the base model petrol and under the Rs 5 lakh mark for the base model diesel. Of course, its competition will include cars like the Ford Figo Aspire, the Hyundai Xcent, the Honda Amaze and the Maruti Suzuki Swift Dzire. It will also go up against the Tata Zest which is also a sub 4-meter compact sedan.