We get our hands on the newly launched Mini Cooper S Convertible in Goa for a short spin and some ‘mini’ fun. Read on to know what it is like. 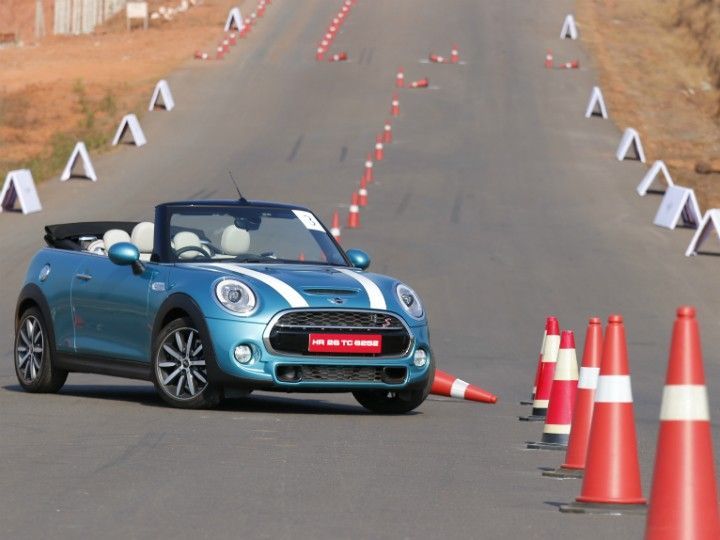 The more I look at the new and updated Mini Cooper, the more I like it over the last generation. And the new Cooper S convertible is the final nail in the coffin (in a good way) towards my choices. From the cute curvy body, to the round LED daytime running lights, to the wheels that remind you of old aircraft propellers, there is a lot to like about the Mini. But this has been said time and again, so we will focus more on the ‘convertible’ part of the new Mini Cooper S.

We are glad that Mini has stuck to their conventions and kept the Mini with a standard canvas roof instead of a fancy folding hard top that is in vogue today. The India spec cars will get a standard black roof with the option of adding a woven Union Jack (British Flag) into it. The roof itself can be put up or down when the car is in motion upto a speed of 20kmph and the whole action takes a quick 18 seconds! Other details that are worth a mention include the front bumper with its aggressive twin intakes which can either be a chrome or a painted color, a centre mounted dual exhaust and of course, the optional driving lights that hark back to the rally heritage of the original Mini Coopers that blitzed the likes of the Monte Carlo Rally in the 60s.

The interior too is a direct lift from the hard top Cooper S and comes with enough buttons, switches and knobs to keep a little child busy for hours. Being a convertible, the interior is in the spotlight a lot more than it normally is and you can choose between a range of colors, materials and designs to make your car as individual as possible. Of course, being a CBU, the Mini Cooper S convertible does get a long line of optional extras (at a cost) and it is near impossible to make a Mini identical to another one on the road.

The convertible we drove came in a shade of beige on the seats and although it does go really well with the teal exterior, we would ideally have chosen a sportier color combination with the exterior to make it more exciting. The seats of course are great and offer a load of support in every direction with its padded bolster and under thigh support extensions. Of course, the Mini Cooper S convertible is mainly driven by just two peoples and so to avoid wind turbulence with the roof down, Mini also supplies the Cooper S convertible with a wind deflector that needs to be manually fitted.

The Mini Cooper S convertible comes with a 2.0-litre turbocharged, 4-cylinder engine that makes 190PS of peak power and 280Nm of peak torque. The engine is mated to a 6-speed automatic gearbox that also gets a paddle shifter, a feature that was missing on the cabriolet that was available in India so far. Now although we haven’t really had as much time behind the wheel of the new Cooper S convertible as we would have hoped for, we can tell you one thing! If you open the ZigWheels Dictionary and look up the word ‘Fun’, there is a picture of this bright teal Mini Cooper S Convertible right next to it.

Throttle response is immediate and the Cooper S actually feels like a naturally aspirated GoKart! The older Mini Convertible never came with the Cooper S spec engine and although you did get the top down motoring magic, you never got the performance to match. The new one has no problem ticking both boxes! And being a convertible means that the driver can hear the fabulous exhaust note and the even better turbo blow-off valve even clearer than in the hard top and that in our books is a big plus!

As we mentioned earlier, the Cooper S convertible feels like a gokart to drive. The handling is as direct as any larger and more expensive sportscar, and if there was ever a benchmark that Indian car manufacturers wanted to compare their handling to, the Mini Coopers are it. Even in its convertible guise, the Cooper S is not floppy and spongy as it used to be and is very pointed and precise. The feedback from the steering wheel and the point and shoot ability of the car is genuinely impresses us.

That said, if you expect to use this as your everyday car, you better have a spine made of titanium. It isn’t that the Cooper S convertible wants to break your back, it is just that the car is just too stiff for Indian roads. That said, if we were asked to choose between comfort vs handling, we would choose handling any day. The ride quality is extremely bumpy and the stiff suspension lets in every little stone, crevice and pothole that you drive over! The Cooper S Convertible also really disappoints us when it comes to brakes. The Cooper S gets ventilated discs up front and solid ones at the rear, but the brake feedback is actually very poor and the brakes themselves feel inadequate and do not inspire confidence especially after a bout of aggressive driving. Now we don’t know if our particular car had this issue, but if this is across the board, the Cooper S convertible certainly needs to get a serious brakes upgrade.

All in all, would we buy one? Yes. And an emphatic one at that. As I mentioned earlier, I love convertibles, and this Mini Cooper S convertible is one of the most fun we have had in a while! Not only does it give you a million miles of sky and a lovely engine/turbo note, this is one of those cars that just make you happy. Now we know that the asking price is way too much for a car that would essentially be your second or third, but if you are going to get the Mini, just ditch those more hardcore hardtop and get one of these droptop convertibles instead!