New kid on the block or tried and tested – which one makes for the better daily mile-muncher? 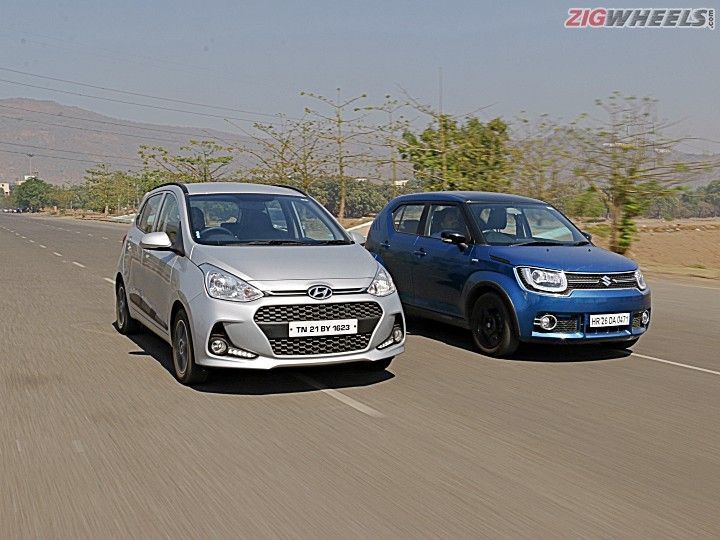 Now chances are, if you’ve been looking to buy a mid-sized hatchback that can go mile after mile efficiently, you want something spacious. Something that gives you that feel-good factor and gets an expansive list of features as well.

Since 2013, the Grand i10 has championed these very factors and with its recent update, and more competent diesel engine, things have only gotten better. But now, it goes up against the all-new Maruti Suzuki Ignis which brings in a 4th factor – the X-factor.

The Ignis features design we’ve never seen before and a few segment-first features, both, of course, coming at a slight price premium. Is that reason enough to choose it over the proven formula?

It might be a small car, but the Ignis wears a tough look. Its wraparound grille and ultra-bright LED headlights make it a bigger attention grabber. With its boxy side profile and flared wheel arches, it also pulls off the crossover look convincingly and in other countries, the Ignis does get all-wheel drive as well.

The rear end does look awkward though. The rear windshield is uniquely shaped, but because it sits so high up rearward visibility for the driver isn’t ideal. Also, the chunky rear bumper gives it a stout stance, but as a result, the 175-section tyres look a tad too thin.

In comparison, the Grand i10 comes across as the more mature and universally palatable design. The more aggressive front bumper, daytime running LEDs and new 14-inch alloys are the styling changes on this facelifted Hyundai. The rear end is a bit of an acquired taste, thanks to the round-reflectored rear bumper, which may not be to everyone’s taste. Still, it’s not as polarizing as the Suzuki’s derriere.

The Ignis, though, has another trump card, which is the sheer number of customization options. However, for someone who likes a more polished and traditional look, the Grand i10 will strike a better balance and the car feels better built too.

The story continues on the inside and the Grand i10, despite being the older car here, offers better interior quality. The Suzuki’s hard plastics and average trim grade can’t compete with the Hyundai’s cabin feel. There’s plenty of that feel-good factor and you get the sense that you’re in a car from a segment above.

Of course, being a Hyundai, it gets what you’d expect for the price and then some. There’s automatic climate control, a push-button starter, rear AC vents, voice commands and a new seven-inch touchscreen infotainment system. A good thing about the touchscreen is that it falls into your line of vision very easily, so you can focus on the road better.

The UI’s easy to navigate through as well and it gets a 4-speaker sound system. Apart from MirrorLink, the head unit gets Android Auto and Apple CarPlay too, but unlike the Ignis, there’s no in-built navigation. Additionally, it is a fingerprint magnet and gets hard to read under direct sunlight.

On the other hand, the Smartplay infotainment system in the Ignis is a little easier to use. Android Auto and Apple CarPlay make their way here too and while you don’t get MirrorLink, the Ignis does get two more speakers than the Grand i10, though both cars are on par when it comes to sound quality.

Where there is a big difference, is the cabin’s design. The Ignis has a very quirky dashboard and apart from dual-tone trim, you can also have bits like the door handles and floor console panels contrast-coloured. It also gets airplane cockpit-styled switches for the automatic climate control and gets a lot of the Grand i10’s aforementioned features too. You don’t get rear AC vents, but unlike the Hyundai, you do get adjustable front headrests.

The Ignis is also the easier car to get in and out of, as the doors open really wide and the seats sit taller too, giving you a more commanding driving position. But it’s the Grand i10 that does a better job of accommodating three at the rear. The Hyundai’s seat upholstery is more premium as well and even the cushioning is thicker.

Power To The Driver

Here’s where things get eerily close, because both engines make the exact same 75PS of power/190Nm of torque, and at nearly the same rev figures too. One distinct difference is that the Ignis gets four cylinders, while the Grand gets three. At startup, the Grand is noticeably noisier and vibrates more.

Things improve once you get going, though, and the Hyundai offers linear performance. The engine is great for everyday duties and the snappy gearbox makes it nicer still. The midrange is, again, good for highway usage, but punch the throttle hard and power tapers off if you get too close to the redline.

While there is usable performance at higher revs, it’s best to shift up early. Make no mistake, it’s a punchy motor, but if you are looking at a lot of highway driving, the Ignis is the way to go. Power delivery isn’t as smooth as it is in the Grand i10, but it’s still very city-friendly. The clutch feels a bit lighter too and once you’re out on the highway, it has a stronger midrange.

It also feels keener to rev, which makes overtaking on the highway much easier. But if you think the Ignis is much quicker than the Grand i10, you’d be wrong. In the run from 0-100kmph, yes, the Ignis’ 12.85 seconds time was 0.36 seconds faster. But what matters a lot more is the in-gear acceleration, and in the 30-80kmph sprint, the Grand i10’s 7.93 seconds time was nearly a second quicker than the Ignis.

The Grand i10 seems to have the punch expected of a turbocharged engine, minus any of the lag. In the Ignis, on the other hand, even if you slam the accelerator there’s a wait till around 1,800rpm and the torque comes in a sudden rush.

Both cars get to 120kmph without breaking a sweat, but the Ignis has the sportier suspension setup, which means it’s more stable at high speeds. You can accelerate through highway undulations, while in the Grand, thanks to its more comfort-set suspension, you will have to take it easy.

At low speeds, the Hyundai deals with potholes better, but the Ignis gets an upper hand when you factor in city and highway usage. It strikes a better balance of comfort and dynamics. The Suzuki is also better at dealing with those disturbingly big speed breakers with its greater ground clearance, while its steering inspires more confidence as well.

They’re neck-and-neck when it comes to braking, but our tests saw the Ignis stop a little quicker (100-0kmph in 42 metres vs 47 metres). That said, both cars did get a little unsettled under panic braking, but the Grand i10 felt marginally more stable.

Both offer great fuel efficiency and in our tests, the Grand was more frugal in the city (19.1 vs 15.87kmpl), while the Ignis was less thirsty on the highway (23.08 vs 22.19kmpl). A common guarantee is that both will get you a great tank range.

Admit it, you’ve secretly wanted the Ignis to win. Credit where it’s due, Maruti has done well by offering dual airbags, ABS and ISOFIX as standard safety features. Additionally, even the lower variants are good value for what they offer, not to mention, it’s the only diesel automatic hatchback this side of Rs 10 lakh.

However, the interior quality isn’t acceptable at this price, especially since it’s sold through Maruti’s premium NEXA range of dealerships. And that’s where the Grand i10 excels. It’s equally well-equipped, is in a league of its own when it comes to quality, and importantly, the performance is more usable in everyday conditions. Additionally, it does all of this while still being more affordable. So in this shootout, the proven formula wins.

Hyundai Grand i10 Facelift: In Pics

Nios Effect: The Hyundai Grand i10 Now Only...