Ford used to be the go-to company for the masses looking for driver-centric cars. It now tries to bring back some of the magic with the Figo and Aspire Sports Editions. We have our fingers crossed tight. Is this it? 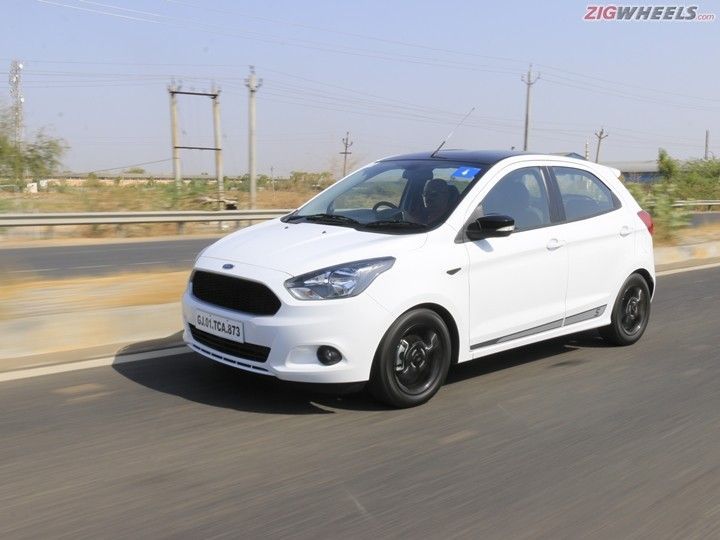 Ford. It was a promise, and the fulfilment of which made even non-enthusiasts understand the importance and beauty of a well-balanced chassis and suspension setup. Enthusiasts looking for affordable drivers’ cars picked blue. Or they did, until Ford decided to substitute some of the blue-blooded pedigree for a more please-all formula. Will the loyalists and enthusiasts swing past Ford showrooms once again, and, maybe, even test drive a Ford? The answer lies in the new Sports Editions of the Figo and Aspire. Drive time.

Devil in the details

Is this just a cosmetic job? Let's see, there is something sinister about this Figo. The new blacked-out headlamps and the black alloy wheels must be responsible for that.

The Figo hatch’s contrasting black roof and mirrors also add to the business-like feel. The new honeycomb grille is absolute class though.  The spoiler on the roof can be forgiven as a necessary evil. (Except, those bits supposedly do help aero.) Then, of course, there is the hallowed “S” logo, last seen on the Fiesta, that's making a comeback here on the decals that run down the side. Sadly, these are just plain stickers with no protective lacquer coat on them.

The Aspire doesn't get a lot of the cosmetic embellishments that the hatch does. For instance, there is no contrast-colour roof or mirrors, and the alloy wheels aren’t painted.

But if you look a bit closer you’ll see that the wheels are 15” units and these use a 195-section tyre instead of the 175-section rubber used on the regular Figo twins. And that means changes to the suspension would have had to be made! But how far has Ford taken the idea? More on that later.  For now just keep in mind that ground clearance is 174mm, same as the regular car’s. Other than this the Figos are unchanged in terms of dimensions. The overall weight has grown just a bit heavier.

When you get in you’ll see that the Aspire gets a leather-wrapped steering wheel with contrast grey stitching whereas the hatch gets red contrast stitching. There's also an all-black treatment for the interiors. Instead of the black dash and silver plastic inserts or the black and beige combo of the Aspire, the Sports edition gets an all-black treatment. There’s no special stickers, lights, colours or buttons here to remind you that you sit in the more special Ford Figo.

The Sports edition will be available only in the Titanium variant. So, it will get dual airbags and an automatic climate control system as well.

The engines certainly don't seem to be any sportier. With quoted figures of 88PS for the petrol and 100PS for the diesel, the Sports editions are unchanged. No, there's no change to the mapping, or the gearbox ratios either. But the Figos have sporty suspension, and boy it shows.

We sampled only the Figo Sports diesel, and as we zoomed down the four-lane highway from Sanand toward the Rann of Kutch it felt a lot less soft. The larger overall wheel diameter has been adjusted with springs that are shorter by 10mm. The springs are also a bit stiffer and the anti-roll bars have also been beefed up for a more planted feel.

On the road, the slight flightiness has been replaced with a nicely tied-down feel that eggs you to drive faster. More importantly, it gives you a greater feel for what is happening at the four corners now and that makes it more intimate and enjoyable even at lower speeds.

At the same time, in the city, it didn't feel firm like the old Fiesta S or the first generation Figo did. There’s a nice suppleness on most road conditions. It’s only sudden ditches that send a thunk into the cabin, and even then you hear it more than feel it. Overall, it's a great setup that lets the Figo Sports be usable and fun. However, we would like to see a properly sticky set of tyres to see what the Figo is capable of as at times the torque would send the wheels spinning mid-corner.

The steering, in the interest of commuters’ needs, remains light. Which I will happily live with. However, when you get in the mood to attack a corner, the disconnect between the steering and the wheels becomes perceptible. And it's this lag that does disservice to the “S” badge on the side.

The Figo Sports definitely eggs you to drive faster and the 1.5 TDCI diesel gives you good punch. There’s ample torque from 1500rpm and the punch remains strong even as you cross 4000rpm. The 5-speed manual ‘box has nice short throws and gears engage with a positive and meaty feel. Fuel efficiency has dropped marginally for the petrol while the diesel’s has dropped by 1.5kmpl to 24.29kmpl. We aren't going to complain. The larger contact patch is worth it.

The Figo Sports Edition makes a lot of sense for the enthusiast looking for a daily driver. The Rs 50,000 bump-up in price is worth the additional features and, especially, the richer driving experience. So it isn't as connected as we would have liked and it isn't as sharp as the Ford “S” badge suggests; however, the Figo Sports Edition has shed the overly commuter-oriented setup for a more balanced experience that brings the Ford magic back to the masses, thank God.