Audi’s A4 finally has a diesel motor under the bonnet. And, it's more powerful than the petrol. Is it more fun? Is it a no-brainer? 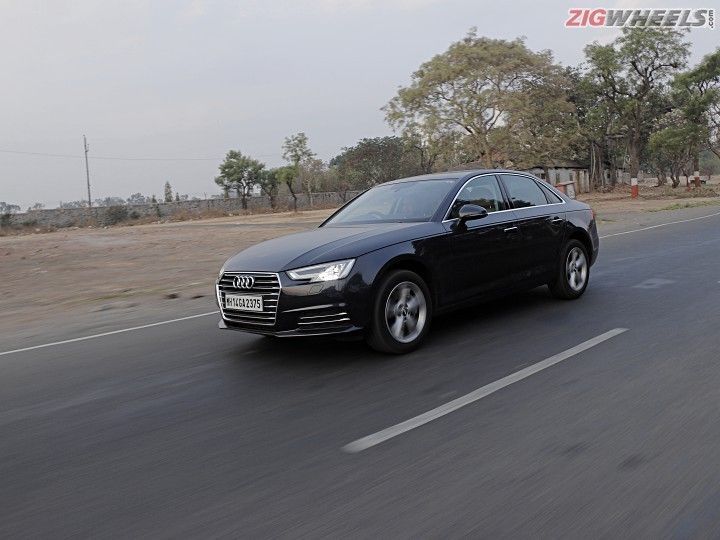 While there was collective hoo-haa at the mention of the 1.4-litre turbo petrol under the A4's hood, the 2.0-litre diesel evokes anything but surprise. What's more, the four-pot motor now has figures on par with the 320d at 190PS and 400Nm. Unlike its rivals from Germany, the Audi A4 is a front-wheel driven. Yep, there's no quattro all-wheel drive wizardry either. The power is sent to the front wheels via the new 7-speed S-Tronic gearbox.

Fire the motor up, and there's a bit of diesel clatter audible in the cabin. But, as you get going, the noise fades until you are treated to a sumptuous silence. But if you aren’t careful with the throttle, things won’t be very laid back. While the engine is no slouch at low rpms, once the rev needle crosses the 2000rpm mark, the pace accelerates sharply! You have to learn to tread lightly on the throttle. Inside the city using Comfort mode makes a lot of sense.

Audi's 7-speed dual-clutch automatic is nothing short of sublime! It always knows what gear to be in, letting you reign in the 400Nm of torque once you dab the right foot. Drive with a light foot and the gearbox upshifts very early in the rev range (~ 1750-2000rpm) eking out efficiency from the motor. On test, the A4 diesel returned 12.53kmpl within the confines of Pune city and 16.81kmpl when we stretched its legs on the highway.

On the highway, the motor doesn't let one feel short-changed on power. With the turbo spooled up, the A4 makes trucks disappear with elan. Switch the gearbox to Sport and stomp the right foot hard down, the 'box holds the revs right up to the redline. The A4 makes a hurried dash to the horizon, whilst clocking a 0-100kmph time of 7.96 seconds. But, you do feel the engine losing steam post 3800rpm and sense the need for a slightly early upshift. Thankfully, you have paddle-shifters tucked away behind the steering to do just that manually.

Actually, the Audi isn't a sporty sedan. The steering and the suspension are set up to be comfortable and not aggressive. The steering is responsive but almost too light and vague at city speeds. It isn't too good at telling you what the front wheels are up to. In the bends, you will find yourself second-guessing and correcting more often than you'd like. It does weigh up a bit as the speeds climb, but it isn't as communicative as the Mercedes-Benz C-Class or the BMW 3 Series. In case you prefer the meatier feel, you can set Audi's drive select to Individual and select the Dynamic setting for the steering. You also get the choice of setting the engine and gearbox combo to Comfort or Dynamic. The two modes aren't poles apart, but you feel the shifts getting quicker and the gearbox holding a ratio a bit more in the latter.

Coming to a halt is a no-fuss affair either. The pedal tells you exactly how much you’re braking and there’s no guesswork involved. The A4 sheds speed quickly - it took just 3.39 seconds to come to a dead halt from 100kmph.

When it comes to ride quality, Audi has opted for a comfort-biased set-up. Not to say the A4 whines around corners, but it feels more relaxed munching miles on an arrow-straight motorway than on a winding ghat section. The electrically assisted power steering doesn't egg you on to power through the bends either. Cruise comfortably and the ride is plush and flat. Within the city, the Audi feels at ease tackling potholes. Other than a slight side-to-side rocking over bigger bumps, the cabin remains composed over broken surfaces. It's quite a comfortable car to be chauffeured around in too, assuming you can make peace with a low-slung seat and a slightly upright backrest.

Tech you can use

A quick glance around the A4's cockpit will tell you pretty much everything you see is brand new. The new design (inspired from the big Q7 SUV) looks swanky, and the perceptible quality has definitely gone up a notch compared to the outgoing generation. The basics are ticked - soft-touch material on the dashboard and the door pads, plush upholstery and an old-school wood look-alike trim circling the cabin. The wood finish might not be to everyone's taste, and I personally think a simple brushed aluminium finish instead would've upped the classy quotient.

The wooden looking trim might be straight from the 1970s, but the tech inside is enough to keep the geeky millennial busy. There are three screens you pay attention to - the super-cool 12.3-inch Virtual Cockpit, the 7.0-inch MMI display and a slim display for the automatic climate control interface. The best bit (and this speaks volumes of the attention to detail) - the fonts and colours are coordinated. Nice!

Also, to declutter the dashboard, the USB and AUX ports are hidden away in the central armrest glovebox next to the wireless charging tray. Usability was clearly well thought of. Speaking of which, the LCD screen that replaces the old analogue instrument cluster spoils you silly. Everything including navigation, calls, music and fuel information can be accessed on the fly using switches on the steering. You never have to take your hand off the wheel or your eyes off the road. I initially presumed the Virtual Cockpit would be one of those features that look great on a brochure and have limited real-world usage, but I'm glad to be proven wrong!

On similar lines, the MMI touch too is surprisingly usable - even on the move. You can use the touchpad on top of the rotary knob that controls the MMI to 'write' a command. It recognised the chicken scratch I call my handwriting pretty well, reading out each alphabet I wrote. While this does work, it is frustratingly time-consuming; especially when keying in a destination on the navigation. The easier way to do it is to have Google or Siri take charge while your phone is paired via Android Auto or Apple CarPlay.

While pairing the phone and setting it up is a straightforward affair, it's the sound system that was a downer, by Audi standards. Playing around with the settings does make it slightly better, but the audio output seems flat. A bit more zest would've been great, especially considering the C-Class gets a stellar Burmester audio system.

Finally, it’s easy to feel familiar inside the A4. For anyone who's used to a Volkswagen group car - it can be anything from a Polo to a Passat - the Audi seems like the sophisticated and well-off elder cousin. There’s no learning involved, and you feel comfortable with the car right from the get go. For instance, bits like the steering-mounted gear stalk on the Mercedes-Benz C-Class or the joystick-like gear lever on the BMW 3 Series take some getting used to.

What's the final deal, then?

The top-spec Technology variant you see in the picture costs Rs 43.3 lakh (ex-showroom) which puts it on par with the other Germans in the segment. And although it doesn't look like it, the A4 is indeed brand new. The new design with the sharp LED headlamps, LED taillamps and the dynamic indicators infuse a dose of aggression in the A4's otherwise docile design. The feature-packed cabin is now plusher and feels like a comfortable place to be in - driver's seat or otherwise. Yes, it isn't a driver's car, but that's something we're willing to overlook considering the mix of practicality, frugality and usability the A4 diesel brings to the table.