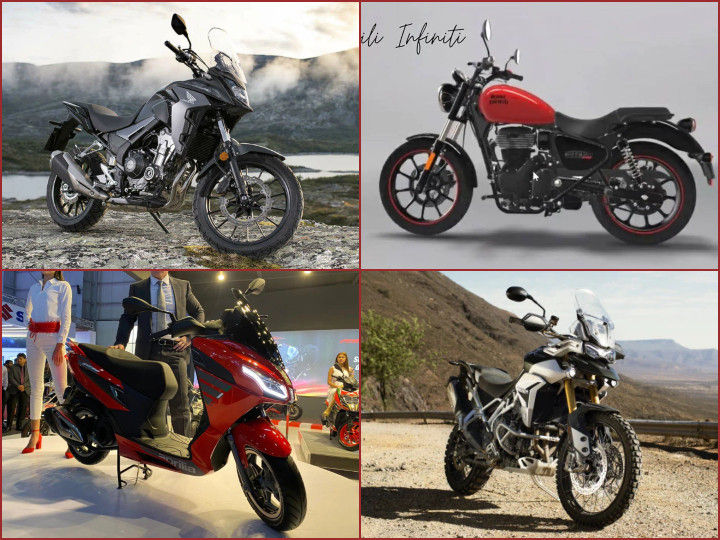 While there has been a lot of negativity around due to the coronavirus lockdown, which has been extended further, we have to stay positive. As a biker, the anticipation of some exciting two-wheelers coming our way in 2020 will definitely bring about some much needed positivity. We have listed down the most exciting two-wheelers that will be launched this year.

British brand Triumph recently launched the 2020 Street Triple RS in India and next up on its list is the Triumph Tiger 900. As the name suggests, the new Triumph ADV bike is powered by a BS6-compliant 888cc inline-three cylinder motor. While power figures remain unchanged at 95.2PS, torque has risen by 8Nm to 87Nm. It will be available in two variants - Rally and GT. Thanks to the new front end, the 2019 Tiger looks slimmer and the compact dimensions give the new Tiger 900 an enduro-ish look.

Also read: Triumph Tiger 900 - Everything You Wanted To Know!

It also features a new subframe while the chassis has been slightly redesigned. The base models and the Tiger 900 GT variants are equipped with adjustable Marzocchi forks at the front and rear. The Triumph Tiger 900 Rally trims, being the proper off-road spec version, gets fully-adjustable Showa units with more suspension travel. Triumph has also finally fitted the ADV bike with sidewall-laced poke rims that allow you to fit tubeless tyres. Stopping power comes via Brembo's top-end Stylema radial calipers, the same unit as seen on the Ducati Panigale V4.

The major update in the electronics department includes cornering ABS. There are six rider modes to choose from: Rain, Road, Sport, Rider, Off-Road and Off-Road Pro, and also a bi-directional quick-shifter.

The big change is the new double cradle frame and the new engine. The engine head and the case is completely different and we expect the new motor to be more powerful and refined than the UCE engine. We are hopeful that the Meteor 350 will feature a 6-speed transmission for a relaxed ride on the highway as the Thunderbird 350 struggled past 90kmph.

The new frame should also result in better handling dynamics and from the pics we can also make out that the overall quality looks much better than the T-Bird 350X. The styling is similar to the older bike and it will be featuring some bright colour options as well. The Thunderbird was always overshadowed by the RE Classic 350, can the new Meteor 350 change that? Do share your opinions in the comments section.

The highlight of the 2020 Auto Expo from a two-wheeler stand point was the Aprilia SXR 160. Yes, this year's Auto Expo was a dud for two-wheelers but the cross-max, as the Italian brand likes to call it, really got us excited.

In terms of styling, the Aprilia RSV4-inspired split LED headlight will definitely catch your attention while the LED DRLs are also a nice touch. While the front has the proper maxi-scooter styling, the rear is a bit underwhelming. We must add that it does look proportional due to the 12-inch wheels on either ends unlike the Suzuki Burgman Street. In terms of features, it gets an all-digital instrument console and a USB charger.

Quick read: Aprilia SXR160 - All You Need To Know

The Italian brand hasn’t confirmed but we expect the new scooter to be powered by the same 160cc motor as seen on the new Aprilia  SR160. Braking hardware includes a disc brake at the front and a drum unit at the rear, and it will also feature a single-channel ABS. One of the main drawbacks of the Aprilia SR150 was its stiff ride quality and we hope the SXR160 has a plusher ride. It doesn’t really have a rival but the Suzuki Burgman Street comes close with respect to genre.

Honda has some big plans for performance bike enthusiasts in our country and will be finally bringing its 500cc range to our market. However, one bike that stands out in this pack is the CB500X. If you glance through the specs, the Honda CB500X doesn’t really stand out as a motorcycle. The 471cc parallel-twin motor pumps out 47PS of power and 43Nm of torque, which isn’t far off the KTM 390 Duke.

But the magic of the bike is in the way it delivers the power in a linear and stress-way nature, and PD, who rode the bike back in 2017, swears by it. You can read his experience here - Honda CB500X Riding Impressions

The CB500X has all the making of a perfect tourer as well, it has the right engine, comfortable ergos and the right hardware with respect to suspension for munching miles. Also, the 830mm seat height isn’t intimidating for shorter riders.  With respect to features you get LED headlight, all-digital console and dual-channel ABS.

The KTM 390 ADV didn’t really leave a lasting impression on us but all is not lost as the Austrian brand has plans to bring the 790 ADV to India in 2020. Most of the ZigWheels bike team members are smitten by the 790 Duke and if the ADV bike is able to replicate its fun factor, it has the making of an impressive motorcycle.

The KTM 790 Adventure is powered by the same 799cc parallel-twin motor as seen on the 790 Duke. But here, it produces less power, however peak torque is made at a lower rpm, so it should have better low-end performance.  Read all the details about the KTM 790 ADV here.

It runs on 21-inch/18-inch wheel setup and features tubeless tyre-compliant spoke wheels. Seat height of the 790 ADV is shorter compared to the 390 ADV. Suspension travel is 220mm on either end and the suspension hardware is adjustable. Being a KTM offering, the 790 ADV has been loaded with goodies such as traction control, cornering ABS quickshifter and also has a special off-road mode.

This was our list, which motorcycle or scooter are you excited for in 2020? Do let us know in the comments.