We delve deeper into the specifications of the latest entrant in the 110cc scooter segment, the Suzuki Let's to find out how it stands against established rivals like the Honda Activa i and the Yamaha Ray 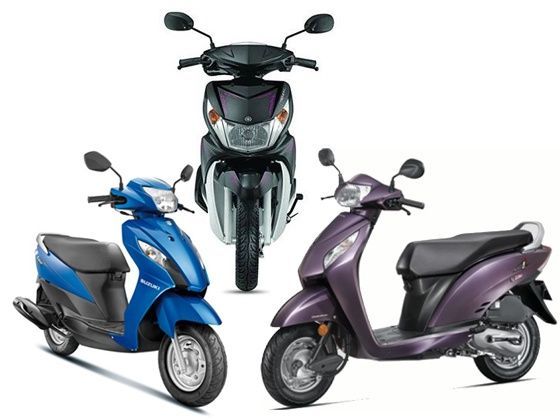 While most two-wheeler manufacturers choose to evolve from a smaller displacement to a higher displacement, Suzuki plans to adopt a completely opposite path. It had made its debut in the Indian scooter segment with the Access 125, which as the name suggests has a 125cc displacement. Even though it has dominated the 125cc segment, Suzuki knew that to rake in the volumes it had to enter the 110cc segment, which accounts for the majority of the scooter share. For this purpose, Suzuki launched its latest 110cc scooter offering, the Let’s targeted at the fairer sex. We do spec comparison to see for ourselves, how the new Let’s vies against other female oriented scooters, the Activa i and the Yamaha Ray.

We will kick-start the comparison with design first, the Suzuki Let’s and Honda Activa i adopt neutral and conventional styling. Both the scooters feature handle bar mounted headlamps and turn indicators situated on the front fairing. Whereas the Yamaha Ray adopts a sporty and sharp design language with the indicators being neatly integrated into the headlamps and positioned on the front fairing. Talking about underseat storage, the Activa i pips its rival with a generous storage space of 18.5-litre as compared to the Ray’s 15.5-litre. But the Yamaha Ray boasts a twin inner box below the handle bar that should be handy for carrying small bottle of water, wallet or other knick-knacks.

Suzuki hasn’t revealed the storage space of the Let’s but when we saw the scooter at its preview it seemed to have the least space owing to its compact dimensions. But this small size means that the Suzuki Let’s is the lightest scooter in its segment and tips the scale at just 98kg, as the Honda Activa i weighs 103kg and the Yamaha Ray is the heaviest at 104kg. Also the Suzuki Let’s get mobile charger as an optional extra, a useful feature in the current setting. The Suzuki Let’s and Honda Activa i come equipped with tubeless tyres whereas the Ray come equipped with tubed tyres.

The basic formula for all the three scooter engines is pretty much the same. Which is a single-cylinder; four-stroke, air-cooled motor mated to a CVT transmission but the only difference is the marginal difference in output. The Yamaha Ray is the least potent scooter of the lot with a power output of 7.1PS at 7,500rpm and torque rating of 8.1Nm at 6,500rpm. The Honda Activa i fairs marginally better with 8.1PS at 5,500rpm and torque figure of 8.1Nm @ 5,000rpm. The latest entrant in the 110cc segment leads the way in terms of engine specifications, as the Suzuki Let’s motor churns out 8.8PS @ 7,500rpm and 9Nm of torque at 6,500rpm.

Given that it’s the lightest of the trio and also the most powerful, the Suzuki Let’s should pip its rivals in acceleration and top speed, at least on paper. In terms of suspension, the Honda Activa i uses a trailing link front setup that contributes in a juddery ride quality. The Yamaha Ray and the Suzuki Let’s employ telescopic forks at front, while ideally it should result in good ride quality; sadly that isn’t the case for the Ray. We haven’t ridden the Let’s yet but judging from our past experience with Suzuki scooters we feel it will have the best ride quality out of the lot.

For braking purpose both the Yamaha Ray and Honda Activa i employ 130mm drum brakes at front and rear. The Suzuki Let’s features 120mm drum brakes at front and back, while disc brake option isn’t available among the trio. But the Activa i gets Combi Brake System (CBS) as standard and Honda claims this improves braking performance by up to 15 per cent.

Fuel efficiency is among the most important criteria’s while finalising the buying decision of an Indian consumer. Yamaha claims that the Ray will run 53km in a single litre of fuel, which makes it the least fuel efficient of the lot. Honda claims that the Honda Eco Technology (HET) tech it employed on the Activa i’s motor enables it to return a fuel economy of 60kmpl. The Suzuki Let’s leads the group in terms of fuel efficiency as the Japanese manufacturer claims 63kmpl for its latest offering. Suzuki asserts that it has managed to attain this figure by applying Suzuki Eco Performance (SEP). It is a tech similar to HET of Honda and basically reduces friction among the mating parts in the engine thereby improving combustion and resulting in better fuel economy.

The Yamaha Ray is the costliest of the trio as it has been priced at Rs 45,566 (ex-showroom Delhi). The Honda Activa i slots between its competitors at Rs 43,595 (ex-showroom Delhi). The Suzuki Let’s like other scooter offerings from the stables of the Japanese two-wheeler manufacturer has been priced aggressively at Rs 42,745. Given the superior cycle parts, better fuel economy and the most powerful engine of the lot makes the Suzuki Let’s the better offering on paper. But this fact can only be ascertained once we do a proper comparison review of these 110cc offerings.