The battle of the supersports heats up with the arrival of the substantially affordable ZX-6R. How does it stack up to the existing heavyweights on paper? 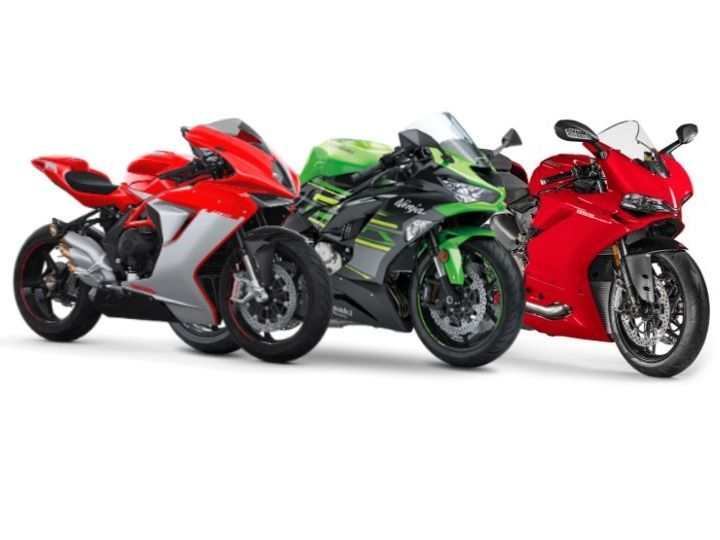 The supersport segment is a niche one. It originally catered to Japanese 600cc track-bred bikes before giving way to larger-capacity European machines from the likes of Triumph, Ducati and MV Agusta. This segment kickstarted in India with the now discontinued Triumph Daytona 675R and has seen the likes of the MV Agusta F3 800 and Ducati 959 Panigale take over. The arrival of the Kawasaki ZX-6R adds an oriental flavour to the segment. It is also the most affordable supersport you can buy right now. So, does the Kawasaki offer the best value here, at least on paper? Let’s find out.

Design and features:
The new Kawasaki ZX-6R is styled similar to the smaller Ninja 400. We get Kawasaki wanting to have a similar design identity for the Ninja lineup but we preferred the aggressive and sharp lines of the earlier generation 6R. Kawasaki has reworked the frame for more comfortable ergonomics and the bike now has a longer and narrower seat with a saddle height of 830mm. It also gets adjustable brake and clutch levers. The rear turn indicators are mounted on the rear number plate holder so that the unit can easily be removed for racing, and there’s a semi-digital instrument cluster which now includes fuel level and range indicators. It is also the only bike here to feature all-LED headlamps.

In true Italian style, the Ducati 959 Panigale looks properly exotic. It looks the largest of the three here and in true Panigale fashion, looks properly aggressive. The 959 might miss out on LED headlamps but features a full digital white-backlit LCD instrument console that is the most comprehensive here.

When it comes to looks, the MV Agusta F3 800 features a timeless design. It has curvy, swooping lines that, like other MV Agusta models, look timeless. The F3 800 can be differentiated from the F4 by its triple stacked side-mounted exhaust pipes. Its trapezoidal-shaped headlamp features conventional halogen type lighting setup and the bike gets a digital instrument console. This has blue backlighting along with small fonts, which makes reading information on the move a bit difficult.

While the Ducati 959 Panigale and MV Agusta F3 800 both look exquisite, we prefer the Ducati’s instrument console layout and ease of navigation, so it gets our vote here.

All three bikes here get different engine layouts. The Kawasaki here features an inline four-cylinder motor, the MV Agusta gets an inline three-cylinder motor while the 959 Panigale gets an L-twin engine configuration.

Now, 600cc supersports are known for their peaky power delivery for better track performance but this makes them feel lethargic for road riding. To counter this Kawasaki has added a shorter final gear ratio on the Ninja ZX-6R, which should make it peppier at low revs. The Kawasaki makes the lowest power here by virtue of its lack of cubic capacity. It gets 3-stage traction control as well as two power modes (Full power and Low power). Given its in-line four engine configuration, we can expect a linear power delivery which would be just right for newer track riders.

The MV Agusta F3 here features a race-bred motor based on the F3 675 sold abroad. It makes its peak power at a lofty 13,000 rpm and the high rev ceiling means instead of shifting gears mid-corner, you can take the same corner in a lower gear, allowing for smoother and quicker exit speeds. It also sounds the best of the three and the bi-directional quickshifter allows for clutchless upshifts and downshifts. It is a boon during intense track outings. You can also fine-tune your ride experience with the four rider modes ( Rain, Normal, Sport and Custom) and eight-stage traction control, along with the throttle response and engine braking too. Given the performance and vast ability to set up the bike to your liking, the MV Agusta F3 would be our pick on the racetrack.

The Ducati Panigale 959 makes the most power and torque here at the lowest rpm. This makes performance accessible in places other than the racetrack, like your favourite twisties or in the city. However, the L-twin engine configuration has the rear cylinder bank sit quite close to your thigh and without appropriate clothing, can cause some serious burns. It gets three riding modes (Race, Sport, Wet), eight-stage traction control and three-stage engine brake control. If you are a serious rider who wants a trackday bike on their daily rider, this is one good option.

Given their track preference, all three bikes here get top-shelf suspension components and tyres. The Kawasaki features a pressed steel perimeter frame while the Ducati gets a lighter, more exotic monocoque steel frame. Similarly, the MV Agusta gets a lighter trellis frame. Of the three, the Ninja ZX 6R weighs the most at 198kg (kerb) while the 959 Panigale weighs 197.5kg (kerb). The F3 800 weighs 173kg dry which by our calculation would put the kerb weight around 186kg. That makes it substantially lighter than the other two bikes here. The lighter weight also helps agility on the track. On the braking front, both the Italians get larger 320mm front disc brakes with higher-spec Brembo M4.32 monobloc callipers.

On the Ducati, you get 3 ABS modes: Race, Sport and Wet. Race mode is meant for the track as it deactivates rear wheel ABS for some slideways fun. The MV Agusta gets just 2 modes while the Kawasaki gets none. Interestingly, you can switch off ABS completely on the Italians but not on the Japanese bike. On the rubber front, the Italians wear similar Pirelli tyres while the Kawasaki gets Bridgestones. They’re all are high-spec ones and suited for track rides.

Dimension wise, the MV Agusta is the smallest bike here and that makes it easy to manage around town. Its shorter wheelbase also helps it change direction quicker. All three bikes have committed riding positions given their track intent. The Ducati has a very aggressive rider triangle compared to the MV Agusta. While Kawasaki has worked towards improving the ZX-6R’s ergonomics, we will have to reserve judgement on it until we have ridden it.

The Kawasaki Ninja ZX-6R is priced Rs 4 lakh less than the Ducati 959 Panigale and Rs 6.3 lakh less than the MV Agusta F3 800. The F3 800 is currently discontinued but Motoroyale will be getting the Euro IV-spec F3 800 back to India at a slightly higher premium.

So is the Kawasaki better value? It is, if you like the idea of a supersport bike and want to get into track riding. The other two bikes in this list are for serious riders and are bikes you can compete in races with minimal modifications. If we were to pick one, money no bar, it would be the MV Agusta F3 for its sharp focus, almost telepathic levels of handling and a powerful motor with one of the best throttle responses we have experienced on any bike. But there’s no denying that the Ninja ZX-6R’s pricing is going to make this segment of motorcycle a lot more accessible to a lot more riders than the Italians ever could.