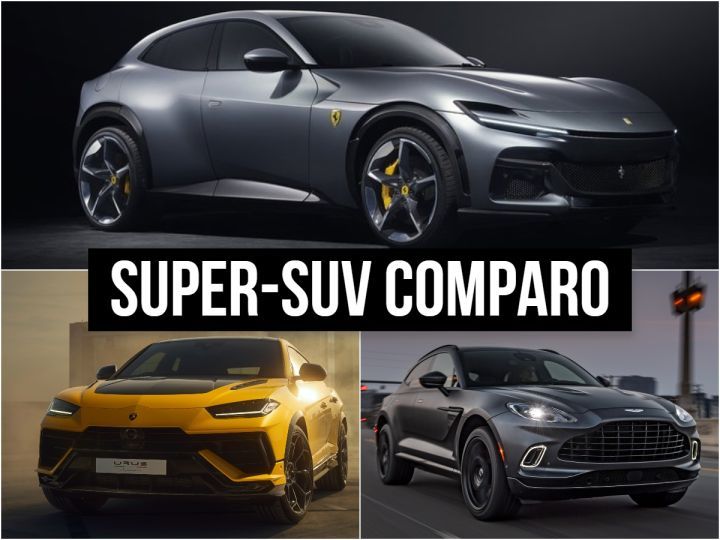 That day has come when we can use Ferrari and SUV in the same line. Ferrari has unveiled the Purosangue SUV, which might be one of the most important models in the brand’s recent history in terms of revenue. Ferrari is actually late to the party dominated by the Lamborghini Urus along with the Aston Martin DBX. Both these SUVs are also available in more focused versions – the Urus Performante and the DBX707. For some kicks, we figured we’d compare these three super SUVs in an attempt to pick a favourite.

Do they justify the ‘super SUV’ tag?

Let’s talk numbers; and for better perspective, here’s a table with all the vital figures of all three SUVs:

It seems like Maranello has got this in the bag with the Purosangue. It is the most powerful SUV with the highest top speed as well. Of course, it is down on torque in contrast but the Purosangue has got a V12 up its sleeve which no one saw coming. A turbocharged V8 was expected but Ferrari went all out and gave us a screamer of a naturally aspirated V12, making the Purosangue stand out from its elite company with ease.

Whatever the figures are, a V12-powered SUV in this day easily justifies the super SUV tag the most. The Aston Martin DBX707 comes close to the Ferrari and is one of the fastest SUVs money can buy today. The Purosangue is easily the fastest SUV in the world right now with a top speed of over 310kmph (Sorry, we don’t consider the Model X in this comparison as it is electric).

Which SUV was put on the best diet?

Ferrari literally calls it a four-door sports car, as it features a lot of technological advancements in terms of chassis with borrowed bits from its sportscars. The Purosangue gets the four-wheel steering from the 812 while also gaining a cutting-edge active suspension that eliminates the need for anti-roll bars. But everything comes down to the numbers and how these SUVs tip the scales.

It is clear that Ferrari is lighter than the other two by a decent margin. But this gets even more impressive when you factor in that the fezza packs a big-capacity, V-12 instead of a V8 like the others. Also interesting is how Ferrari has managed to place the engine the farthest from the nose, helping them attain a rear-biased weight distribution of 49:51.

How many yachts should you sell?

The Ferrari has been obliterating the other two in most performance parameters, but everything comes at a price. The price you have to pay for that kind of performance and the snobby badge is a whopping $400,000 (estimated and approx Rs 3.2 crore).

Sounds okay, until you take a glance at the pricing of the other two SUVs. The Urus Performante suddenly looks affordable with a starting price of $260,676 (Approx 2.07 crore), and the DBX707, with the performance it offers, looks like the bargain of the century with a price of $232,000 (approx Rs 1.8 crore). Our valuable consumer advice would be to buy the Aston Martin, but Ferrari knows its buyers more than anyone and the number of zeroes in the price might be of the least concern to them.

That said, these are the conversion prices in US dollars; and considering a standard Urus cost north of Rs 3 crore in India, the Purosangue will definitely come with a sticker tag exceeding the Rs 5-crore mark when it arrives in India, probably by next year.