One of these SUV coupes is based on India-bound VW Taigun, but will it make it here? 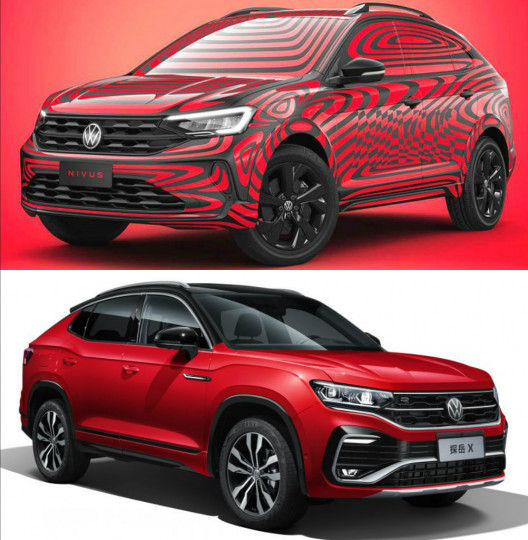 Let’s accept it: Even though SUV coupes are not to everyone’s taste, an increasing number of carmakers is coming out with new SUV coupes. That said, budget SUV coupes are still a rarity even in the global scale of things. Well, Volkswagen seems to have a solution for that. Actually, not just one. The German Giant has revealed two SUV coupes: Nivus and Tayron X R-Line for two different markets. One of them is, in fact, based on the India bound Taigun SUV. Read on for more.

Back in December 2020 we had reported that Volkswagen is working on a new SUV called Nivus. A teaser also revealed the silhouette of the SUV, revealing its coupe intentions. Right now, Volkswagen has revealed the Taigun-based SUV headed for South American markets. It is underpinned by the ubiquitous MQB A0 platform and is expected to be offered with a 1.0 litre TSI engine that produces 128 PS paired to a six-speed manual and automatic gearbox.

Apart from the sloping roofline, the Nivus is also raised by 10mm in comparison to the Taigun with changes to the chassis and steering. The Nivus offers a boot space of 415 litres along with a ground clearance of 177mm.

Although we don’t know about the Nivus, the Taigun is enroute to India and destined to debut in 2021. It will be powered by BS6-compliant 1.0-litre TSI turbo-petrol and 1.5-litre TSI petrol engines developing 115PS and 150PS of power. When launched, it will rival the Kia Seltos, MG Hector, and Hyundai Creta.

Moving on to the other SUV here, the Tayron X is a coupe version of the Tayron exclusively for the Chinese market. The SUV is made by FAW-Volkswagen. Yes, the very same FAW which brought the Haima range of vehicles to the Auto Expo 2020. The base Tayron X uses a 1.4-litre turbo petrol engine while the R-Line variants get a 2.0 litre four-cylinder unit mated to a seven-speed DSG as standard, and 4Motion all-wheel drive (optional).

With the announcement of the Tayron X, Volkswagen is also back in the game after the absence in China due to COVID-19. Without beating around the bush, we would like to report that the Tayron X is a China-specific version, highly unlikely to make a presence in India. The Nivus is also unlikely to be offered in India, at least in the near future.

But the Taigun is definitely coming to India. Along with it, Volkswagen will also introduce a sub-4m SUV based on the Skoda Vision IN.