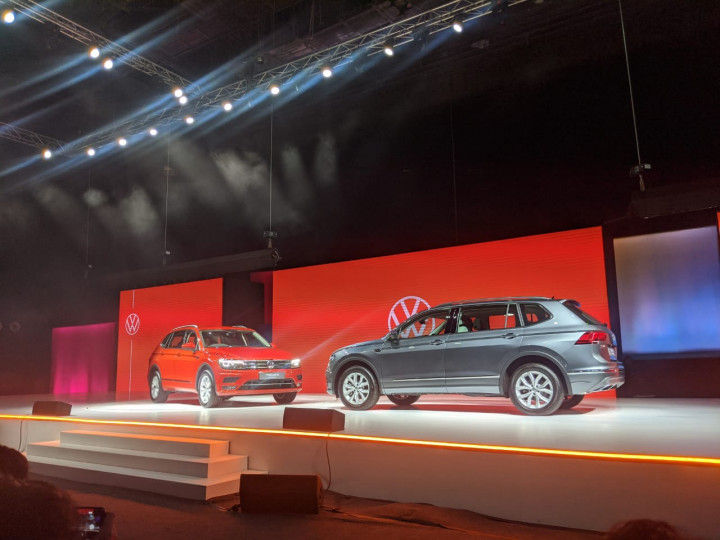 Volkswagen India has launched the Tiguan Allspace at an introductory price of Rs 33.13 lakh (ex-showroom). The Tiguan Allspace comes in one single trim and is offered with a single petrol engine only. Here’s a detailed price list and comparison table against the standard model:

The Allspace is essentially a longer Tiguan with a third row of seats. It is 215mm longer and has a 110mm longer wheelbase as well. Here’s how it stacks up against the standard Tiguan in terms of dimensions:

In terms of design, the Tiguan Allspace looks fairly similar to the standard model albeit for minor updates such as slightly revised grille flanked by new LED projector headlamps and a revised front bumper. The side, apart from the extra length, looks similar to the standard model with 18-inch 10-spoke alloy wheels. Moving on to the rear, it comes with split-LED tail lamps.

Inside, the Tiguan Allspace’s cabin now comes in a black-beige finish, giving it an airy and premium feeling. It retains the standard model’s neat and minimalistic dashboard layout that also feels tough and built to last.

The Tiguan Allspace is powered by a BS6-compliant 2.0-litre TSI engine that puts out 190PS of power and 320Nm of torque. It’s paired to a 7-speed DSG and drives the four wheels via VW’s 4MOTION all-wheel drive tech. The Allspace won’t be offered with a diesel engine option in the near future. Here’s how its petrol engine fares against the standard model’s TDI diesel motor:

The Tiguan Allspace is 47PS more powerful than the standard model. However, it produces 20Nm less torque than the diesel motor.

The Tiguan Allspace locks horns with the Skoda Kodiaq, Honda CR-V, Ford Endeavour and the Toyota Fortuner. What do you think of the Tiguan Allspace? Is the lack of a diesel engine a bother for you? Let us know in the comments section below.