Kardashians Of The World, Your Ride Is Here! 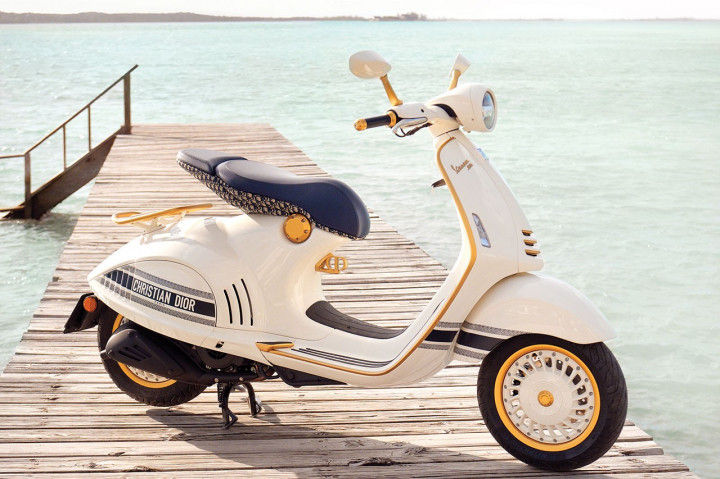 Fashionistas around the world now have a new ride to drool over. Vespa has collaborated with fashion house Christian Dior for the 946 Dior Special Edition scooter. Here’s what we can expect from this limited edition scooter:

Makings of an Exclusive Scooter

As part of the collaboration, Vespa basically handed over its flagship 946 scooter to Dior’s Creative Director Maria Grazia Chiuri. Her vision has the 946 sport a pale beige paint job with gold trim pieces, a blue leather saddle, and hand grip covers. The base of the scooter including the exhaust features a blacked-out finish.

This is not the first time Vespa has collaborated with a high-end design label. In the past, the Italian scooter maker had joined hands with another Italian designer label, Giorgio Armani, for the exclusive 946 Emporio Armani Edition.

In November 2016, Vespa launched the 946 Emporio Armani Edition in India. It was priced at a whopping Rs 12,04,970 (ex-showroom Pune). Despite the exorbitant price tag, two of the three scooters allocated for India found buyers while the third BS4 scooter was last being offered with a Rs 2 lakh discount.

The stripes on the front mudguard, fender, tail section and the base of the floating sport Dior’s iconic oblique pattern. It’s a homage to Dior’s former creative director Marc Bohan who created the design pattern in 1967. It has since then gone on to become Dior’s trademark and can be seen on almost all of its products.

The 946 Christian Dior edition scooter gets accessories like a custom top box and half face helmet with oblique pattern and gold trimmings. The custom top box fits perfectly on the rear gold rack.

Underneath all the luxury trimmings is the Vespa 946. There are no mechanical changes to the scooter and it still continues to use a 125cc motor putting out 11.5PS. It gets disc brakes on both ends with ABS, all-LED lighting, and a digital instrument console.

The Vespa 946 Christian Dior Edition is slated to be launched worldwide by March next year. Like all good things, the scooter will be a limited edition run.

It Will Be Expensive

While Vespa has not revealed the pricing, we expect it to cost around the same as the Vespa 946 Emporio Armani edition. That puts the estimated pricing in the region of 10,000 Euros (Rs 8.5 lakh without taxes). Given that Vespa could not sell all of the Vespa 946 Armani edition scooters in India, it is highly unlikely they would bring something as expensive as the 946 Christian Dior edition here.