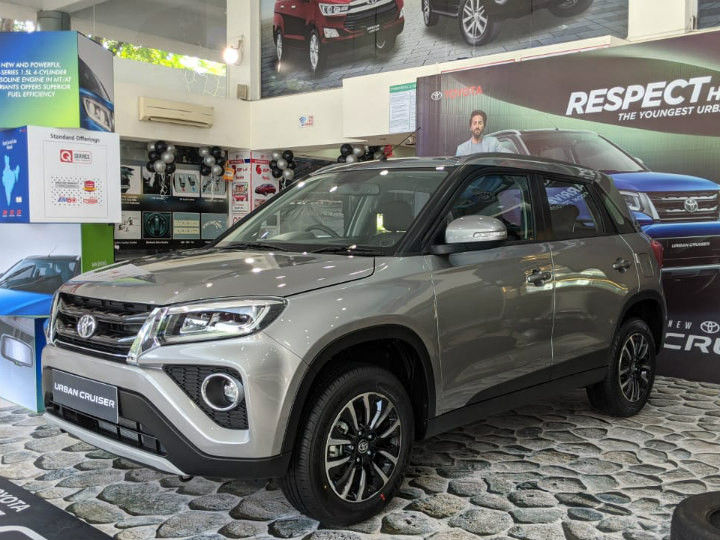 Toyota dealers in various cities around India have commenced deliveries of the first batch of Urban Cruiser sub-4 metre SUVs. This is almost a month after the carmaker launched the SUV in India. Of course the first customers that will receive the Urban Cruiser are the ones who pre-booked the sub 4 metre SUV for a token amount of Rs 11,000. These customers will also be offered  a 2-year/20,000km free maintenance package.

The Toyota Urban Cruiser is the second product to be launched under the joint venture between Toyota and Maruti Suzuki, and is priced from Rs 8.40 lakh to Rs 11.30 lakh (ex-showroom Delhi). Offered in three variants: Mid, High and Premium, all manual variants and the base Mid automatic is pricier by Rs 5,000 over the Vitara Brezza it is based on. The High and Premium automatic variants carry a premium of Rs 15,000.

On the outside, the Urban Cruiser is largely similar to the Vitara Brezza aside from a rebadge, Toyota styled twin-slat grille and more aggressive fog lamp housing. A similar treatment is given to the cabin if you discount the coffee brown theme. Notable features include a 7-inch touchscreen infotainment system, smartphone navigation, Android Auto and Apple CarPlay, steering-mounted audio controls, smart entry with push button stop/start, auto-dimming rearview mirror, climate control, cruise control, and rain-sensing wipers. Dual airbags, ABS with EBD, rear parking sensors with rear view camera and ISOFIX child seat mountings are some of the safety kit on offer.

The Urban Cruiser utilises the same 1.5-litre  K15B petrol engine as the Vitara Brezza that delivers 105PS and 138Nm. Paired with either a 5-speed manual or 4-speed torque converter, the automatic variants get a mild-hybrid system with auto idle start-stop and torque boost.