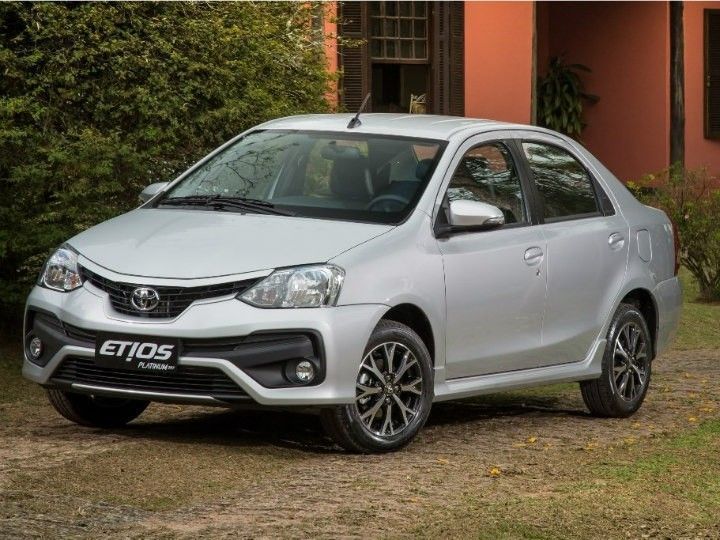 Japanese car giant Toyota has unveiled the 2016 Etios and Etios Liva in Brazil. The new cars are the facelifted versions of the Etios and the Liva available in India. The facelift has been spied testing a few times in the India, but has always been concealed under camouflage. So, the Brazil-spec cars give us an idea of how the Indian version will turn out looking. Both the cars have been rebadged to Etios Platinum and Liva Platinum in Brazil.

Speaking of the exterior changes, both the cars receive a revised front end, new alloy wheels and a few nips and tuck on the rear end of the car. The front now sports a sleeker and more stylish grille setup, and a more muscular bumper is also standing out with a wider lower air dam as compared to the current car. The headlamps remain intact and so does the hood; the same goes for the sides, except for the new diamond cut alloy wheels. The same changes could be noted with the hatchback version, however, it has a more neatly appointed rear as compared to the sedan.

Inside, the Etios siblings get all-black interiors with piano black inserts, a new steering wheel setup, touchscreen infotainment system and a digital instrument cluster. However, since these are Brazilian-spec cars, we expect the Indian version to carry the same beige interiors as the current Indian models. Also, the possibility of the digital instrument cluster making it to India is dicey.

Under the hood, the Brazilian Etios sisters carry the same 1.5-litre petrol motor as the car available in India. However, it gets a 10PS bump over ours. The Indian version will retain the same set of motors on both the diesel and petrol fronts and with the current power figures.

We expect the launch to take place in the upcoming festive season.