MG stole the limelight with the Hector unveil but that’s not all of it. Here’s what all stood out in the automotive world last week: 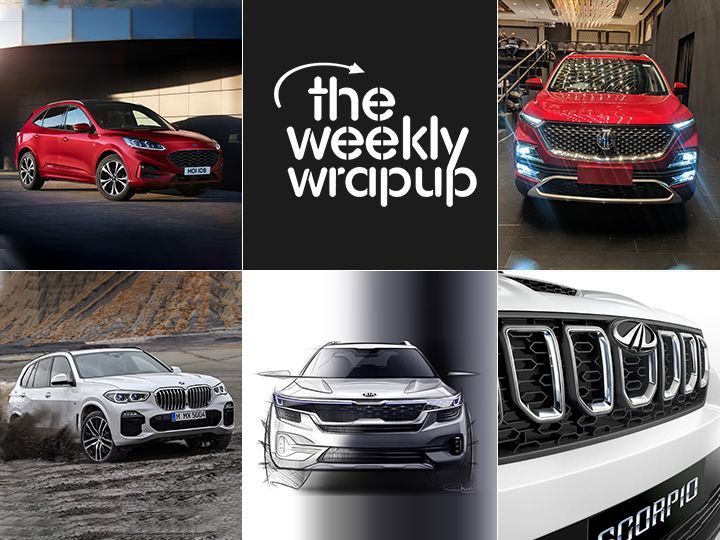 The last week saw the unveiling of the much-anticipated MG Hector, which also marks the debut of the British brand in India. The Hector looks promising and set to tackle its better established competition. In other news, BMW took the wraps off its fourth generation X5 in India. The all-new X5 is available in three variants with prices starting from Rs 72.90 lakh. The Mahindra Scoprio, which has been around since 2002, will get a complete overhaul and the fourth-gen was spotted testing for the first time ever. Mahindra was again in the news, but this time around it was as a result of its partnership with Ford. The American brand announced that they are working on a new SUV to take on the Hyundai Creta and other compact SUVs. Speaking of compact SUVs, Kia released the design sketches of the upcoming SP2i, giving us a peek at its first model for India.

The MG hector has finally arrived on our soil. Marking the British brand’s debut in India, the Hector is set to go up against its rivals which include the Jeep Compass, Tata Harrier and the Hyundai Tucson. Launch of the SUV will happen in June 2019, and the Hector is expected to be offered in a total of four variants and five colour options. Powering the Hector is a Fiat-sourced 2.0-litre diesel engine churning out 170PS of power and 350Nm of torque mated to a 6-speed manual. The 1.5-litre turbocharged petrol makes 143PS and 250Nm mated to the 6-speed manual and a DCT. The petrol engine is also available with a 48V hybrid, the first of its kind in India. The Hector comes loaded with features and the much talked about iSMART, a connected feature about which you can read here. Read more about the Hector here.

The Mahindra Scorpio has been around since 2002 in India and is popular among Indian customers for its rugged nature and old school SUV credentials. Even though we had three iterations of the Scorpio before, the fourth-gen is expected to undergo a complete overhaul. From the spy shots, the SUV looks bigger and taller than before and is also expected to share platform with the Thar. Expect Mahindra to offer the SUV with a seven seat layout, with the third row featuring front facing seats instead of the side facing ones in the current generation. A new 2.0-litre BS6-compliant diesel engine instead of the 2.2-litre mHawk and 2.5-litre m2DICR diesel engines will be used. The new engine is expected to churn out better output figures and come mated to a 6-speed manual transmission and an automatic gearbox. Mahindra will most likely debut the fourth generation Scorpio at the 2020 Auto Expo, pricing it at a slight premium over the current model.

BMW has launched the latest iteration of the X5 in India with prices starting from Rs 72.90 lakh (ex-showroom India). The all-new X5 is available in three variants - 30d Sport, 30d xLine and the 40i M Sport. The fourth-gen X5 is larger than its predecessor but is lighter because of the extensive use of aluminium in its construction. It is based on the same Cluster Architecture (CLAR) platform as the BMW 5 Series and other models. The xDrive 40i is powered by an inline-six 3.0-litre petrol engine, while the xDrive30d comes with an inline-six diesel motor. Both engines come mated to an 8-speed automatic transmission. The fourth generation X5 is a step from the older model in terms of design, except for the glaringly large kidney grille. It will continue to rival the likes of the Mercedes-Benz GLE, Audi Q7 and the Volvo XC90. Find more about the X5 here.

Kia SP2i Design Sketches Out, Stays In Tune With The Concept

Kia will step into India with the much-awaited compact SUV based on the SP Concept. Christened the SP2i in India, the new SUV is ready to hit the market and the Korean brand has released the first official design sketches of the upcoming SUV. The sketches of the production version is in tune with the SP Concept and it gets the iconic tiger-nose grille up front. The SUV is expected to be called the Trailster or the Tusker in India, and it will get both the petrol and diesel engines at launch. A set of BS6-ready 1.5-litre petrol and diesel engines are expected to power the SP2i. A plug-in hybrid version of the SUV can also be expected in the future. The SP2i is expected to be launched by September this year, and will rival the likes of the Maruti Suzuki S-Cross, Nissan Kicks, and the Renault Duster. Read more about Kia’s first offering for the Indian market here.

Ford Readying A Creta Rival For 2022

Ford is planning to introduce a new SUV by 2020 to rival the likes of the Creta, T-Cross, and the Duster. The SUV comes as a result of the brand’s collaboration with Mahindra. Codenamed BX745, it is expected to share its platform with the Ssangyong Tivoli. The same platform in a modified version is currently being used by Mahindra for the XUV300. The Ford BX745 will be using Mahindra engines and is expected to share the same 1.5-litre diesel engine as the Marazzo MPV. A BS6-ready 1.5-litre petrol engine can also be expected. We expect Ford to name the BX745 as the EcoSport as it already has a good fan following in the country. Price range of the SUV will be similar to the Hyundai Creta and the upcoming Kia SP2i. Head here to read more about it.