Team Force Gurkha will be fielding the same winning crews as last year, but the vehicles have been given several mechanical upgrades 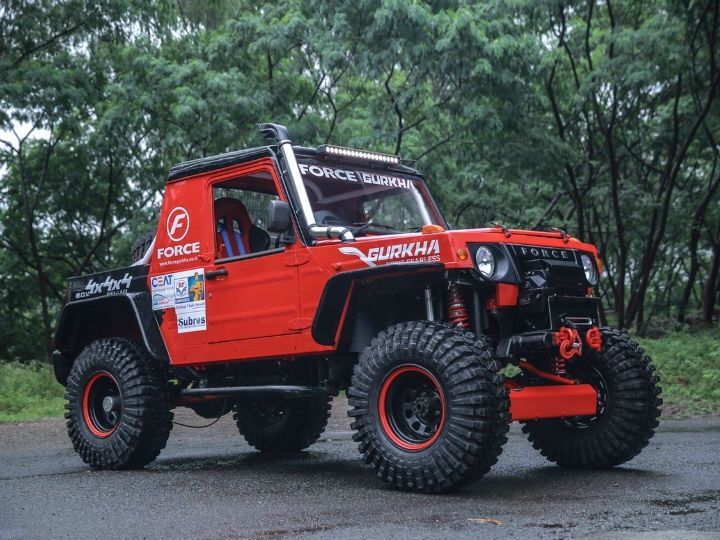 Pune-based Force Motors, winners of the top two positions at the first edition of Rainforest Challenge India 2014 has announced its three-crews and the revised cars for the “Force Gurkha RFC 2015” campaign.

At a short event held just before the technical and safety scrutiny for the event, the three competition vehicles were unveiled to the media for a first look.

However, the front and rear suspension is now an all-coil spring set-up with long travel shock absorbers. In fact the entire suspension geometry has been revised with there being a three-link front suspension layout along with a heavily triangulated four-link set-up doing duty on the rear. The front and rear axles have been modified and strengthened taking into account driver feedback from last year’s experience and in preparation for a tougher RFC 2015.

All this has been to maximize fullest use of the torque from the strong engine and for that one needed both traction and control, which the new suspension system and its aggregates help deliver. This has also helped the teams to move from 33-inch Simex tyres (outer diameter mounted on 17-inch wheels) used last year to the much much larger - 37inch Maxxiss Trepadors.

Other technical changes all abound in the mechanical department where the axles have been modified and manufactured in-house in Pune. The axles now come equipped with the latest Eaton electronic diff locks which are driver adjustable from a switch in the cockpit.

All three vehicles come equipped with high-performance twin motor Come-up Blazer winches following on from lessons learnt with them in the RFC Malaysia event last year.

Piloting these three vehicles will be the same team as last year. Tan Eng Joo from Malaysia returns to defend the top spot with his trusted navigator Tan Choon Hong. This crew will rely on the proven prowess of the pilot and his focused approach along with the youthful exuberance of his navigator which is helpful given the tough nature of this event.

The crew piloting the third Force Gurkha is also the one which finished second last year! Made up of the jovial Mervyn behind the wheel, he will be supported by Hamizan Abdul Hamid in the navigator’s chair. This duo apart from placing second in the RFC India last year, also finished in the same place in the main Malaysian event last year as well.

The team is hoping that the winning combination of super capable vehicles and the expert pilots and navigators will help it clinch all three-podium positions. The team will also put to good use the learnings from last year and should be in a better position to battle the odds.