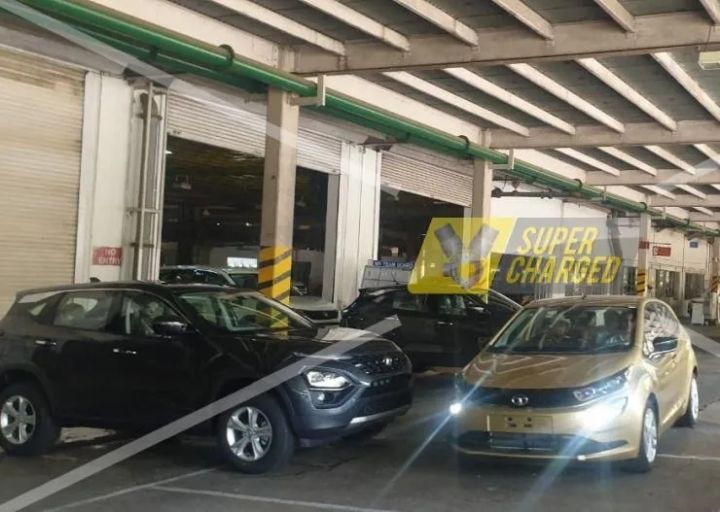 The Tata Altroz has been spied in its production guise sans any camouflage inside what looks like Tata Motors’ facility. The Altroz, which was first showcased as the 45X concept at the 2019 Auto Expo and unveiled to the rest of the world at the 2019 Geneva Motor Show, is Tata’s answer to the Maruti Suzuki Baleno and the Hyundai Elite i20.

The hatchback from the spy shots look similar to the concept that was showcased at the Geneva Motor Show with all the striking design elements being carried over. The front end looks sharp with the honeycomb grille along with the black lower lip and the blacked out headlights. The DRLs coupled with the fog lamps can be seen in action from the spy shots. Based on Tata’s Impact 2.0 design language, the hatchback looks premium with some cool blacked out elements. For example, the thick black character line that runs through the lower window line along with the blacked-out ORVMs render a more premium feel to the hatchback. The wheels on the spied car look different and smaller that the ones showcased in Geneva.

The Altroz, whose name was derived from Albatross, will be based on the company's new modular ALFA ARC architecture. Check out its dimensions in the table below:

Powering the Altroz will be the same 1.2-litre turbocharged petrol engine and a 1.5-litre diesel engine from the Nexon. The diesel unit produces 110PS of power and 260Nm of torque while the turbocharged petrol engine churns out 102PS and 140Nm of torque. The engines are likely to be offered with a 5-speed manual and the 6-speed AMT borrowed from the Nexon. A naturally aspirated 1.2-litre 3-cylinder 85PS/114Nm motor will also be available for those worried about ‘kitna deti hai’.

The Altroz will pack features such as a  7-inch floating touchscreen infotainment system, a TFT cluster display, rear AC vents, ambient lighting, and cruise control. Driver and passenger airbags, seatbelt reminder, parking assist and rear sensors with camera, a speed alert system, ABS with EBD, and ISOFIX child seat mounts will be offered as safety features. We spent some time with the Altroz in Geneva. While that car had an all-black interior, Tata could offer a choice of dual-tone interiors for the India-spec model keeping in line with the premium positioning of the hatchback.

Tata Motors is set to launch the Altroz in June 2019. It will rival the likes of Hyundai i20, Maruti Suzuki Baleno, Honda Jazz, and the Volkswagen Polo. We expect it to be priced in the range of Rs.5.5 lakh to Rs 8.5 lakh (ex-showroom).

Sound off in the comments section about what you think about Tata’s new premium hatchback.