Here’s A Glimpse Of The Upcoming Tata Altroz’s Cabin 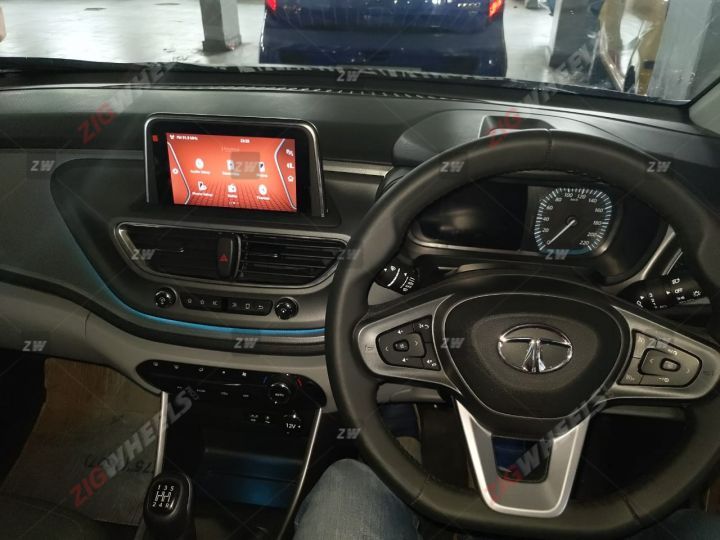 Tata’s hotly anticipated premium hatchback, Altroz, has been spied yet again. This time around, the interiors of the production-spec hatchback have been spotted, giving us a clear glimpse of what to expect from the Maruti Suzuki Baleno rival.

Going by the spy images, the interiors seem to have been kept fairly similar to the pre-production Altroz that was showcased at Geneva. The flat-bottom steering wheel can be seen with cruise control buttons alongside media controls. The unique cluster which comes with a digital tachometer and MID can also be spotted along with the analogue speedometer. There’s even a touchscreen infotainment system, which we believe will be a 7-inch unit. The whole cabin carries a dual-tone colour scheme and looks upmarket with the blue shaded ambient lighting.

Tata had earlier released some teasers showcasing various novel features of the Altroz. The doors on the Altroz are of particular interest as a video teaser also revealed that they are designed in such a way to open at an angle of upto 90 degrees. The teaser also ends with a Google Assistant logo, hinting at voice-assisted features.

The Altroz is also expected to be offered with some impressive features like a touchscreen infotainment system with Apple CarPlay and Android Auto, automatic climate control, a huge multi-info driver’s display, and steering-mounted controls.

Key rivals for the Altroz include the Maruti Suzuki Baleno, Hyundai i20, Honda Jazz and Toyota Glanza. The Altroz is expected to be priced from Rs 5.5 lakh to Rs 8.5 lakh (ex-showroom) when it debuts by the end of this year.