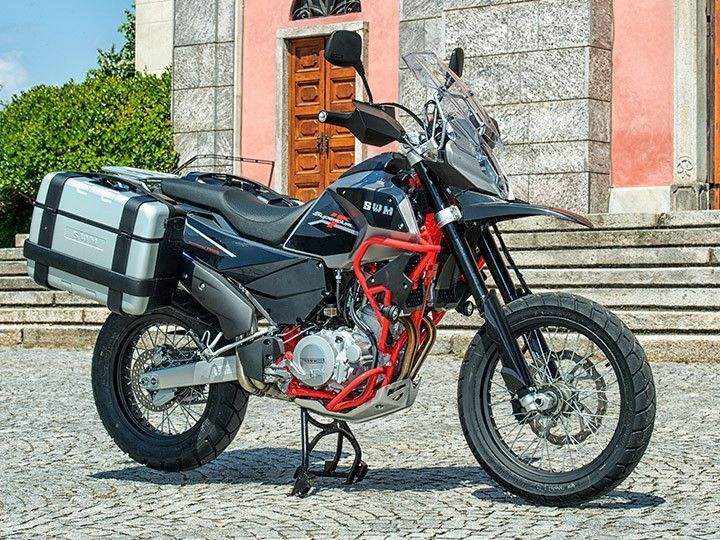 SWM, the Italian motorcycle brand, will soon be launching their first bike in India in association with Kinetic’s Motoroyale. The SWM Superdual T is a 600cc middleweight adventurer tourer, one of the very few ones out there.The motorcycle is likely to be priced under Rs 6 lakhs, and as per our expectations, will land on Indian shores by early 2018.

SWM might be a virtually unknown company in India but it first came into existence back in 1971. It has been known for it trials, enduro and motocross bikes. It had to stop production in 1984 but was resurrected again in 2014 by the Chinese group, Shineray. The bike is currently being manufactured at a plant in Northern Italy which earlier produced and housed Husqvarnas while it was under BMW.

In India, the operations of the company will be handled by Kinetic’s Motoroyale. The group currently handles premium European bikes from MV Agusta and and will launch British icon Norton soon. The CKD units of the bike will be assembled at Kinetic’s plant in Maharashtra to keep the bikes affordable.

The Superdual is SWM’s flagship motorcycle and comes in two variants. The T is the touring version while the X is the off-road version of the bike. The T will, however, be the first one to reach our shores and from our expectations, it will happen by the first quarter of 2018. As per Kinetic Group M.D Ajinkya Firodia, the bike is expected to be Motoroyale’s biggest seller when it launches.

The Superdual T is a proper adventure touring-focused bike. It gets an LED headlight and a tall windscreen while a small basic digital unit does duty of an instrument console. The fuel tank is almost rectangular, with knee recesses, and it also has a small black cladding over it. The bike resorts to basic features instead of electronics to keep costs under check. It does get vital off-road goodies like knuckle guards, bashplate, radiator guards and a big luggage rack.

For suspension, it uses 45mm USD forks from Fast Ace at the front with a travel of 210mm and a Sachs monoshock unit at the back with a travel of 270mm. For braking it uses a 300mm disc brake at the front and a 220mm disc brake at the rear. Both the brakes come with floating callipers from Brembo. The front tyre is 19 inches in size and the rear one is 17 inches in size, which allows better manoeuvring during off-roading. Saddle height stands at 898mm, which is on the higher end, and the bike offers a ground clearance of 180mm. The bike has a kerb weight of 169kgs.

The Superdual T will compete against Kawasaki’s Versys 650 when launched in India. Besides that, there won’t be much competition as SWM enters an unchartered but sure-to-succeed territory here with a middleweight adventure tourer, which will find a lot of demand in our country. Currently there are only big and expensive adventure tourers like Triumph’s Tiger range, Ducati’s Multistrada and the Honda Africa Twin in the market, and their high asking price makes them way inaccessible for most bikers.