Porsche joins the controversial coupe-SUV space with the Cayenne Coupe. Does it serve a purpose or do the riled up purists stand justified? 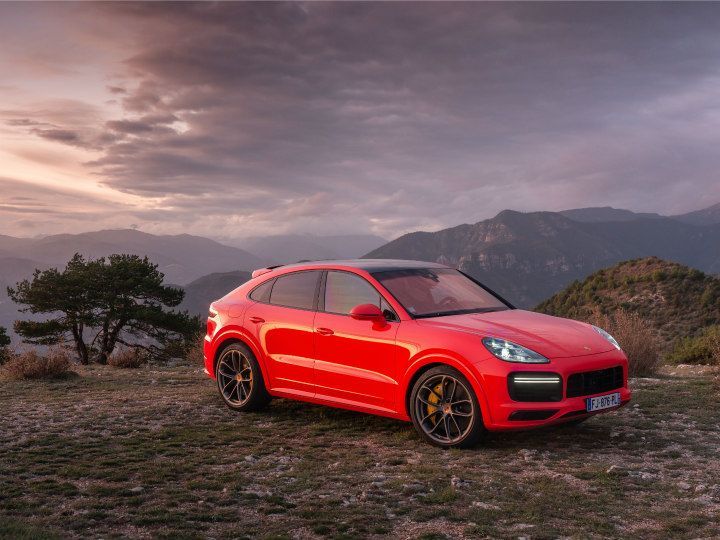 The benefits of being an auto journalist. You get to fly to exotic locations like Nice, France, and drive exotic cars like the Porsche Cayenne Coupe. Both luxuries that otherwise this keyboard monkey cannot afford.

But I got the experience because Porsche believes they couldn’t afford to miss out on the coupe-SUV space, polarizing as it may be. Lo and behold, the Cayenne applies a dollop of hair gel, combs its roofline back sweet and slick, and with a French word suffixed, discovers a new personality. But why exactly does the Porsche Cayenne Coupe exist?

For A Sportier Drive Experience?

First impressions certainly suggest so. Porsche will be launching the base Cayenne Coupe as well as the Cayenne Coupe Turbo in India. But even the entry-level SUV is driven by a 3.0 litre petrol V6 that produces 340PS and 450Nm of torque. No, there's no PDK here, but with the 8-speed Tiptronic gearbox driving power to all four wheels (when required), this 2 ton behemoth darts into triple digit speeds before your passenger can ask you “Was that a speed camera?” A true challenge on France’s roads where speed limit changes are literally mere blinks apart and you find yourself giving the happy pedal no more than a tickle to make sure it stays under 80kmph.

Don’t get us wrong, the Cayenne Coupe is an easy urban drive, but the car masks its speed so well that you have to keep a strict eye on the speedometer to make sure you aren’t starting a penalty scholarship for the traffic police’s kids. As a highway tourer, it is simply excellent and in some ways feels like a modern take on a GT car. A charm similar to the Panamera’s but with the added benefit of a commanding driving position and ground clearance (190mm-245mm of it with air suspension).

But if you want the version that’s befitting of the Cayenne Coupe’s athletic aesthetics, just get the Turbo. While the standard coupe is a blisteringly quick SUV, one drive in the Turbo will have you craving for the drama the latter offers. A 4.0 litre V8 powers this version -- at its essence, the same engine as the Lamborghini Urus. With 550PS/770Nm on tap, the Coupe Turbo does the 0-100kmph sprint in under 4 seconds. That’s about 2 seconds quicker than the standard coupe and yet, it’s not the headline.

If the Cayenne Coupe’s acceleration is brisk, the Cayenne Coupe Turbo’s is vicious. Stomp the throttle and you are stuffed into the sports seats hard with the V8 belching its war cry out the sports exhausts. Opt for the lightweight package and it even drops some sound insulation to make the experience more visceral. Noise matters; it just does. And if you’re getting a sportier looking Cayenne, it just feels more appropriate if it has the background score to match.

What’s more is that irrespective of the version you pick, you get a thoroughly involving drive experience. Our drive from the French Riviera into the hills up north involved, almost exclusively, curves, sharp bends and hairpins on two-way roads with lanes no wider than the Cayenne Coupe itself. And yet this giant German was only too happy to keep up with Sunday morning superbikers darting their way through the hills. The steering is THAT communicative and predictable. Can you tell it’s a big car? Do doubt. The Cayenne Coupe can mask its speed but not its size or weight. Chuck it into a 90-degree turn and you have to muscle the steering back to counter the body roll. However, unlike most fast big SUVs, there’s no need for over correction. It’s one quick and hard countersteer, followed by absolute stability. The optional rear wheel steering will certainly make it sharper still and would make consistent cornering less taxing. But the Cayenne Coupe, pre-pocket slashing options, is sorted in the dynamics department.

That said, if you plan to drive the Cayenne Coupe hard often, it would be wise to invest in the ceramic discs as well. It’s impatient while climbing up the speedometer but regular steel brakes will reach their boiling point soon getting over two tons of Porsche to slow down quickly.

There’s more that makes the Coupe feel more purposeful, though. Like its standard Sport Chrono package to adjust the powertrain and standard adaptive dampers according to the drive scenario. The India-spec Cayenne Coupe is also expected to get air suspension as standard.

However, everything said above holds true for the Cayenne too. Still not reason enough to birth the coupe!

For A Cooler Interior?

Opt for one of the lightweight packages and the glass top gets swapped for a carbon roof (lined in Alcantara) that’s a good 21kg lighter, and the rear bench can be switched to two individual seats with some storage in between. But has it become woefully impractical at the rear because of the sloping roof? Not quite. The coupe is 20mm shorter in height vs the standard Cayenne. But to counter the loss in headroom, the coupe’s rear seats sit 30mm lower. So at 6’5’’, yours truly was able to sit in the rear seat without being squashed down by the roof. Additionally, at 625 litres, the coupe loses 147 litres of boot space vs the Cayenne but it’s still plenty for the family’s week’s worth of luggage. So if you like the looks of the coupe over the Cayenne, the trade-off on usability isn’t severe.

Otherwise, the cabin, as you’d expect, isn’t much different from the Cayenne’s. You get the same available features like the analogue tachometer flanked by digital screens on either side in the instrument cluster, the night vision infrared camera, and a choice of music systems by BOSE or Burmester. It also gets niceties likes powered front seats with heating and ventilation, four zones of climate control, a heads-up display and the 12-inch touchscreen infotainment system. Of course, what features your Cayenne Coupe has depends on how you spec/configure it.

Just The Looks Then?

Well, yes. Technically speaking, the Cayenne already does what the Coupe will. But to be fair, this is an emotional segment to begin with. With that in mind, the Cayenne Coupe is an excellent execution. Coupe SUVs go wrong quite easily but the attention to detail here adds some good flavor to what may come across as frivolous for many.

For example, the Coupe gets two rear spoilers – a fixed one that sits above the rear windshield and an active spoiler that sits above the tail lamps and rises (by upto 135mm) only at speeds of 90kmph and above to offer additional downforce. And while the total width is no different than the Cayenne’s, the rear doors and haunches have been restyled to look meatier. The end result is that the Cayenne Coupe looks more like the 911 than the Cayenne ever has.

Viewed from the side profile, the Cayenne Coupe is, simply put, far sexier than the Cayenne and the styling truly compliments its hasty performance and bewildering agility. Even the number plate is housed in the rear bumper instead of the tailgate to make the coupe’s rear look lower to the ground. The stance is complemented further by the choice of 21’’ and 22’’ wheels, though 20-inchers come as standard and we’d think twice before going a size larger on our roads.

The Porsche Cayenne Coupe is mostly about its vanity. But it is an SUV coupe that’s very desirable. If anything, with its more 911-like styling, one can’t help but wonder, what if? What if Porsche started off the Cayenne’s journey as a coupe-SUV to begin with and followed it up with a more practical iteration? Maybe the purists would’ve accepted it more easily? Maybe not.

But the fact is, the Cayenne Coupe doesn’t just look exciting, it’s a thorough thrill to drive as well. But yes, the more radical styling combined with the stronger standard equipment package also means this will be more expensive than the Cayenne. Expect prices to start in the range of Rs 1.40 crore for the standard coupe and cross Rs 2 crore for the Turbo.

Poetically enough, the Cayenne Coupe asks the same question the Cayenne did when it was new. If you like it and you can afford it, why should the purists’ opinion even matter?