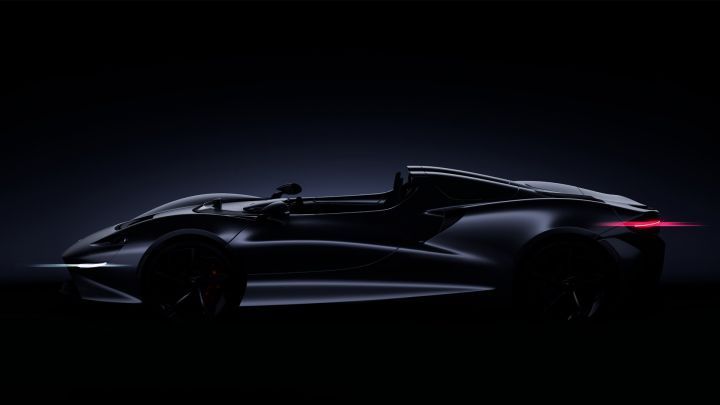 McLaren has just teased the production-spec design of its upcoming topless Speedster and boy it looks dope. Yet to be given a name, it will fall under the carmaker’s ‘Ultimate Series’. Also, the carmaker claims that it will be the lightest McLaren ever built.

But before that, let us talk about the design. Jaw dropping is the perfect word as the Speedster is full of sharp curves and creases. Its sharp nose looks like it’s ready to pierce through the strongest of winds. Then there’s that tiny windshield which reports claim is the world’s tiniest. ORVMs are mounted high up and have a sleek design to aid aerodynamics and keen eyes might notice the McLaren orange callipers peeking being those wheels. Onto the rear profile, the swoopy rear deck leads to the sleek looking tail lamps.

Also Read: McLaren To Turn On The Heat With A Topless Speedster!

Considering that McLaren claims the Speedster will be the lightest McLaren ever, can it do 0-100kmph in two seconds? We hope so. McLaren also claims that the topless beast will be the most fun to drive car ever made by the company.

The Speedster is ‘strictly’ limited to 399 units. Prices for the car are expected to be even more than the McLaren Senna which costs $958,966 (Rs 6.92 crore). The company will be taking pre-orders during the ongoing Monterey Car Week in California. And if you want one, please take a flight to California as we reiterate, only 399 will ever be made!