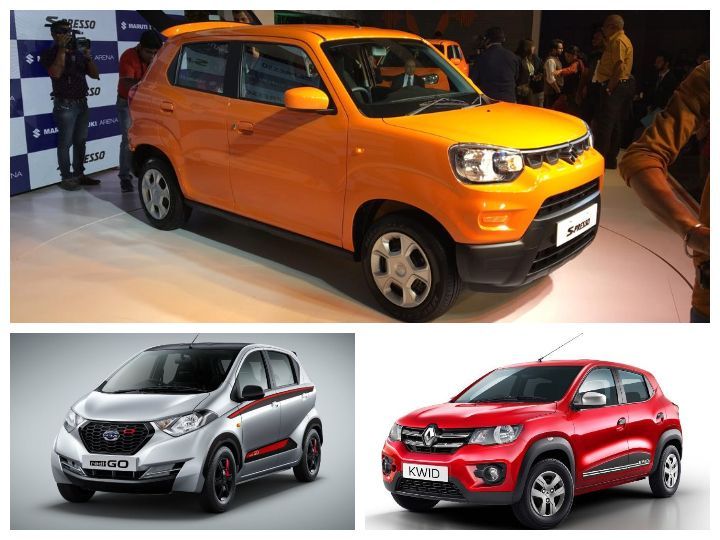 Sizewise, the Maruti Suzuki S-Presso is a tad smaller than the Renault Kwid, the largest car here. It is shorter than the Renault by a full 114mm and narrower by 59mm. Even the wheelbase is smaller by 42mm. That said, the S-Presso is the tallest of the lot and is the only model to come with 14-inch wheels. The Datsun redi-GO is the smallest of the lot and lags behind its competitors by a huge margin in all aspects.

The S-Presso’s boot is smaller than the Renault Kwid’s by 30 litres. However, it betters the redi-GO’s boot by 52 litres.

The S-Presso comes loaded with features. It is the only car in this bunch to come with steering mounted audio controls. Other features include power steering, touchscreen infotainment system with Android Auto and Apple CarPlay, digital instrument display, multi-info display, manual HVAC as well as remote locking. These features can be found in the Renault Kwid as well. That said, the S-Presso and Kwid miss out on a tachometer, a feature that’s found in the redi-GO. However, the Datsun is the least equipped here. While it comes with basics like power steering, manual HVAC, a tachometer and a multi-info display, it misses out on a touchscreen infotainment system with USB and AUX-in functionality.

All three models come with a 1.0-litre three-cylinder petrol engine that develops similar power and torque figures. The S-Presso is the only one to come with a BS6-compliant unit while the one in the upcoming Kwid facelift is expected to be in accordance with the upcoming emission norms. The Datsun redi-GO’s unit is currently BS4-compliant. Just like its competitors, the S-Presso comes with a 5-speed manual and AMT transmission options. Maruti might offer a CNG variant later on with the S-Presso, however, that was not confirmed at launch.

The Kwid and redi-GO can also be had with an entry-level 0.8-litre petrol engine that develops 54PS and 72Nm. Transmission options for this engine is limited to a 5-speed manual only.

Prices for the S-Presso start from Rs 3.69 lakh (ex-showroom), making it cheaper than the Kwid 1.0 and redi-GO 1.0 by Rs 52,000 and Rs 21,000 respectively. Considering the fact that it’s feature loaded and comes with a BS6-compliant engine, the S-Presso makes a strong case for itself. Yes, the top-spec variant is more expensive than the Kwid and Datsun redi-GO. However, the S-Presso has the added advantage of Maruti’s widespread after-sales network. Stay tuned to ZigWheels until we test three cars back to back give you a proper verdict.