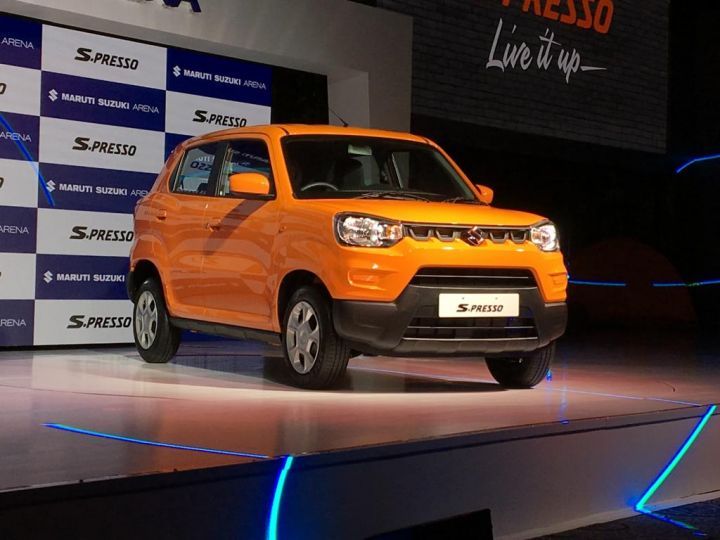 Maruti Suzuki has launched its much anticipated mini-cross hatchback, the S-Presso, at Rs 3.69 lakh. It is based on the Future-S Concept that was displayed at the 2018 Auto Expo. The Made-In-India model that will be built at Manesar will be sold globally across emerging global markets. The Maruti Suzuki S-Presso comes in a total of three trims and four variants: Std, LXi, VXi and VXi +. Two transmission units are on offer, with the AMT being limited to the top-spec VXi variants, taking the variant count to six.

Have a look at the detailed price list of the S-Presso:

When viewed head-on, the S-Presso comes with a stubby nose that houses the sleek grille and halogen headlamps. A tough-looking bumper with black cladding gives it a dash of ruggedness. The profile of the S-Presso looks like an Alto on stilts. However, the upright stance and 14-inch tyres make it look a tad SUV-ish. At the rear, the S-Presso comes with an upright tailgate and C-shaped halogen tail lamps. The S-Presso will be available in six colours including two new shades- Pearl Starry Blue and Sizzle Orange.

Sizewise, the S-Presso is smaller than the Kwid by a considerable margin. However, it has the same ground clearance and stands taller than the Renault. If we take the Datsun redi-GO into the picture, it is the smallest of the bunch here despite having the biggest ground clearance. Have a look at the dimensions table below for a detailed comparison:

Inside, the S-Presso comes with a round central console, just like the Future-S concept and Mini Cooper. The digital speedometer sits at the top while the centre portion is dominated by Maruti’s SmartPlay infotainment system.

Underpinning the S-Presso is Maruti Suzuki’s fifth generation Heartect K platform. It is powered  by a new BS6-compliant 1.0-litre K10B petrol engine that develops 68PS of peak power and 90Nm of peak torque. Transmission options for the S-Presso include a 5-speed manual and an AMT as well. The S-Presso's claimed fuel efficiency figure stands at 21.7kmpl. A CNG variant is expected to join later on as Maruti Suzuki has confirmed that all of its small cars will be getting one. Maruti also claims that the S-Presso has a low turning radius of 4.5 metres.

Primary rivals for the S-Presso include the Datsun redi-GO and the Renault Kwid that’s currently dominating the segment. So stay tuned to ZigWheels for a detailed comparison report between these entry-level hatchbacks.