The Thar will soon be facing competition from the new-gen Force Gurkha. How do the off-roaders compare on paper? Let’s find out 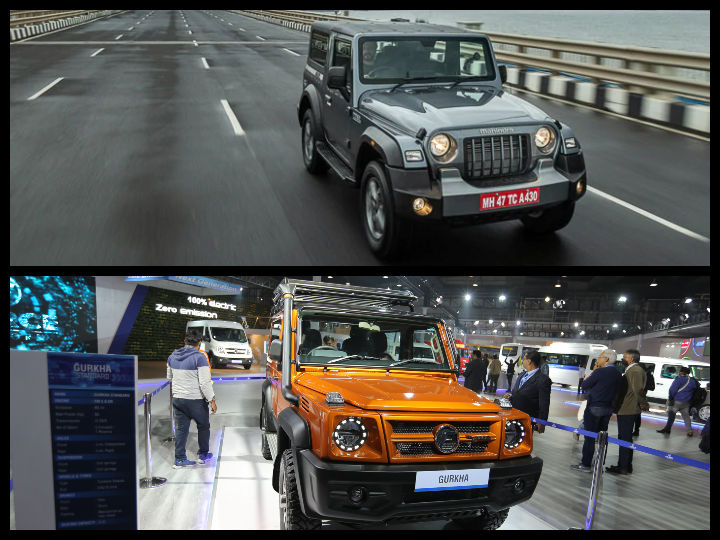 The 2020 Mahindra Thar is here, aiming to appeal to a wider clientele with its lengthy feature list, powertrain options and charismatic nature. That said, the Thar, which is set to go on sale on October 2, will soon have a competitor in the form of Force’s new Gurkha. The Gurkha made its debut at Auto Expo 2020 and is set to be launched soon. Should you go towards the tried and tested way or wait for the improved Gurkha? Let’s find out.

Note: Force Motors is yet to reveal the Gurkha’s dimensions and off-road specifications. So we have used the previous version’s specifications for reference as the new one is expected to be roughly the same.

We will leave this to you to decide which SUV you like. The Thar takes a more modern approach to its design with its Wrangler-like overall profile, large 18-inch alloy wheels and plenty of modern elements like the LED DRLs and tail lamp.

The Gurkha, on the other hand, takes a more utilitarian approach to its design. Nope, we aren’t complaining as it looks every bit an off-roader. But compared to the modern looking new Thar, the Gurkha takes a boxier approach inspired by olden days G-Wagon.

Slap on some aftermarket wheels and auxiliary lights and we’re pretty sure that both SUVs will stand out. The Thar comes in three body styles -- fixed soft top, convertible soft top, hard top -- while the Gurkha is offered with a hard top only. We must admit the Thar with the convertible soft top looks spicy hot!

This is one area where the Thar beats the Gurkha hands down. It’s less rudimentary and more welcoming than its predecessor. The cabin also appears to be well finished and quality levels have also taken a huge step up from its predecessor. We must also mention that the cabin is IP54 water and dust resistant. You can have a closer look at the Thar’s interior right here.

The Gurkha’s revamped interior, on the other hand, feels rudimentary and basic. The touchscreen infotainment system is an aftermarket unit and the cabin can be termed utilitarian at best.  It also falls short on features, something which we’ll be talking about next.

First, the common features. Both SUVs come with a touchscreen infotainment system, a manual air conditioning, and front power windows.

From here, the Thar drops down a gear and goes ahead with cruise control, steering mounted audio controls, coloured multi-info display, and even remote locking.

On the safety front, both SUVs feature dual airbags, ABS with EBD and rear parking sensors. However, the Thar goes a step ahead and comes with electronic stability control and hill start assist. It remains to be seen if Force will offer the last two features in the updated Gurkha.

The Thar utilises a smaller engine that develops 40PS and 20Nm more power than the Gurkha’s larger 2.6-litre engine. And while both off roaders are offered with a manual transmission, the Thar is the only SUV here that comes with an automatic transmission.

And if you want to have a more refined experience, you might want to consider the petrol-powered Thar. It comes with Mahindra’s new 2.0-litre turbocharged direct injected petrol engine that develops a healthy 150PS of power and 320Nm of torque. Just like the diesel Thar, the petrol variants can be had with either a 6-speed manual or a 6-speed automatic transmission.

Both also come with a 4X4 powertrain with a proper low range transfer case.

The Mahindra Thar has a slightly better approach angle while it beats the Force hands down in terms of departure angle. Even the ramp-over angle is better in the Thar and the Mahindra boasts an impressive 650mm water wading ability. Meanwhile, the Gurkha comes with a snorkel and could have the same or better water wading abilities.

In terms of mechanical features, the Gurkha offers diff locks on both axles while the Thar has it only at the rear. But to compensate for the lack of front differential lock, the Thar comes with a brake locking differential.

The Mahindra Thar has a lot going for it over the Gurkha. Looks are subjective to personal opinion and I’m not going to bring it into the equation here. But the Thar has the better interior here, comes with more features, and you can also have it with a petrol engine or with an automatic transmission if you desire. Clearly, Mahindra has ensured it has left no stone unturned and we suggest you to wait for the Thar even if you encounter a super long waiting period.