KTM 390 Adventure - What Do The Spy Shots Reveal?

Just after KTM confirmed the launch of the 390 Adventure for the Indian market, spy shots of the motorcycle surfaced on the internet revealing some juicy details. Here’s what we know so far 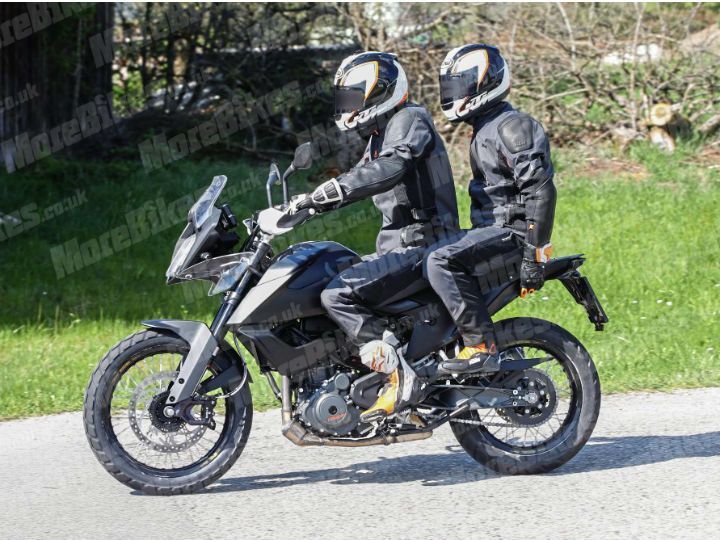 The KTM 390 Adventure is one of the most anticipated motorcycles in the country to date. The reason is simple - enthusiasts want an inexpensive, go-anywhere motorcycle that’s also loaded with technology. Hero MotoCorp’s Impulse gave us a glimpse of what could have been, and the fantasy was further fuelled by the launch of the Royal Enfield Himalayan. Unfortunately, its reliability issues shattered the dream of many aspiring two-wheeled explorers. Now, KTM is bringing us an adventure version of the already-capable 390 Duke. So, let’s take a closer look at the spy shots to find out what it packs.

The spy shots of the test motorcycle reveal that the 390 Adventure is basically a 390 Duke with quite a few alterations. It also borrows design cues from the larger 790 Adventure R. The Duke-like LED headlamps are flanked by small wind deflectors that direct the wind around the rider. The turn indicators and the tiny tail lamp feature LED elements well. The handlebars seem to be the same as the 390 Duke’s, albeit a bit raised. Coming to the handguard kits, they appear to be two-component plastic units that’s offered as a ‘PowerParts’ in the international-spec 390 Duke. The test mules fuel tank extensions look akin to the one on the 790 Adventure, hinting at the possibility of a larger capacity, say about 18 litres. The front fender has been cleverly designed to cover the fork seals to protect it from dust and dirt.

KTM has also used slightly forward-set bear-claw footpegs with rubber inserts to aid ergonomics. The inserts should be detachable to provide even better grip while off-roading. The pillion seat also seems to be upright, and looks like it’s from KTM’s ‘PowerParts’ bin as well (Ergo Pillion Seat). Look closer, and you’ll also notice an aluminium tail rack with integrated grab handles. Meanwhile, the grooves on the tail section hint at pannier compatibility. The TFT colour instrumentation has been lifted from the naked variant, and so is the switchgear.

The engine’s exhaust pipe has been routed conventionally in front of the engine instead of the around-the-engine setup in the Duke. It seems KTM has moved the coolant reservoir tank behind the powerplant (presumably to allow more room for the bigger fuel tank), where the 390 Duke’s catalytic converter is located. The radiator covers seem to be more robust and the crash guard envelopes it neatly. The triangular end can is upswept, which should improve its water-wading capabilities. We expect the motorcycle to be BSVI-compliant as the new emission norms will come into effect just a year after the adventure tourer is launched in the country.

The KTM 390 Adventure rides on WP upside down front forks and a WP monoshock. The rake angle appears to have been increased a bit and the mounting point has been moved slightly forward to the forks. This setup allows easier off-road handling and also makes the motorcycle feel planted owing to the marginal increase in wheelbase.

Furthermore, the Austrian bike manufacturer has employed Excel aluminium alloy spoke wheels in one of the test mules. The front wheel is visibly larger than the rear, and are likely to be 19-inch front and 17-inch rear units. Wrapped with what looks like Metzeler Tourance tyres, the motorcycle should have good grip both on and off the road. Both ends get disc brakes, with the front end featuring a radial caliper. The front brake line is also braided to facilitate better pressure endurance. Expect dual-channel ABS to be offered as standard. The ABS unit may include an ‘adventure’ mode, which is similar to the ‘supermoto’ mode (in 2017 KTM 390 Duke) that deactivates the rear wheel sensor, allowing experienced riders to let the bike’s tail slide on gravel.

A concept version of the KTM 390 Adventure is likely to be unveiled at this year’s EICMA motor show in Milan, Italy. The production model should be ready by the first quarter of 2019. The adventure tourer is expected to cost around Rs 3 lakh (ex-showroom). When launched, it will take the fight to the Royal Enfield Himalayan, the more expensive Kawasaki Versys-X 300 and the upcoming BMW G 310 GS. The upcoming festive season will also witness the launch of another off-road motorcycle, the Hero Xpulse. It’s essentially a more affordable, less complex alternative to the KTM 390 Adventure.