Hyundai Venue iMT vs Two-wheels: How Different Are The Clutchless Manual Transmissions? 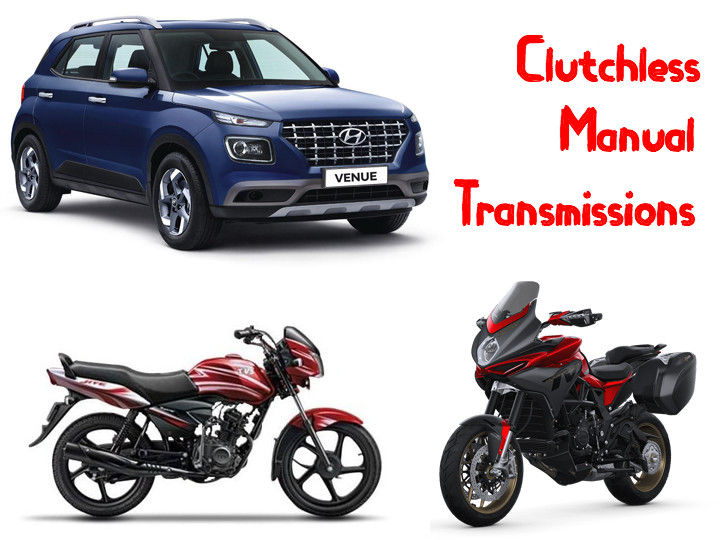 Hyundai beat sister concern Kia to the punch by introducing the iMT (intelligent manual transmission) option on 1.0-litre turbo petrol engine on the Venue. Not to be confused with an AMT, the iMT will allow you to use your Venue as a manual car but without the hassles of constantly clutching in and out during commutes and traffic jams. There are a bunch of sensors and actuators present that sense your need to shift up or down the cogs and to know how it works, you should check out this story or watch the video below.

Now Hyundai says that there are loads of advantages to this sort of arrangement. It is more economical, both in terms of price (compared to an AMT) and fuel costs, which on a turbo petrol motor would be extremely helpful. The added benefits will be that there will not be much ‘head nod,’ a bothersome trait associated with AMT-equipped cars.

While the gearbox is unique in itself, two-wheeler manufacturers have been trying to simplify the clutchless manual process for quite some time as well. Some have even successfully implemented it on their motorcycles. Here’s how:

TVS Jive
TVS provided the same level of convenience afforded by the Hyundai with its 110cc commuter, the Jive, over a decade ago. The bike lacked a clutch lever while the actual clutching/de-clutching process was carried out by a simple centrifugal clutch. Yes, the same system that you find on your scooter was being used here. It was equipped with a rotary gearbox that allowed you to go N-1-2-3-4 and then back to neutral. India did have a rotary gearbox-equipped two-wheeler before the Jive – the Hero Honda Street step-thru – but the Jive was the first bike to get this tech. In case you were not bothered by all the gear shifting, TVS claimed that you could just slot it in fourth and runabout town like a scooter. Sadly, there weren’t many takers for the Jive and TVS ultimately shelved the concept altogether.

MV Agusta Turismo Veloce 800 Lusso SCS
The MV Agusta Turismo Veloce 800 is often regarded as an F3 800 on stilts. This sports-tourer arrives in a couple of variants of which the Lusso SCS is an interesting one. For this particular trim, the exotic Italian bike maker worked closely with clutch manufacturer Rekluse to give the Turismo Veloce a clutchless manual gearbox. Rekluse is one of the world leaders in building centrifugal clutch systems used primarily on small off-road bikes. The Turismo Veloce is in no way or shape capable of tackling dirt or (relatively) light as a dirt bike. Still, the two managed to devise a solution that was capable of putting down 110PS and 80Nm without actually using a clutch lever. And if you were thinking about the gear shifting process, it gets a bi-directional quickshifter whose sole aim is to provide seamless shifts without losing time.

Rekluse has started building its aftermarket centrifugal clutch systems for everyday road bikes. The American brand also claims that its clutches are capable of handling bikes with a power output of up to 140PS. Surprisingly, it offers a heavy duty kit for the Suzuki Hayabusa, which we all know puts out in excess of 140PS. Rekluse also makes clutch kits for more affordable bikes like the KTM 390 Duke and the Husqvarna Svartpilen 401 and Vitpilen 401. It does cost a bomb, around USD 600 (Rs 44,800), for these clutches. The price may throw you off guard but the new 390 Duke gets a quickshifter (of sorts) which along with the Rekluse clutch should work the same as it does on the Turismo Veloce.

A few bikemakers are going on about designing automatic gearboxes and we have sampled Honda’s DCT option on the VFR1200 and on the CRF1000L Africa Twin (experiencing on the new CRF1100L soon). These are still automatic options and not clutchless manuals, despite these gearboxes allowing manual shifting. They are also quite expensive and heavy.

It will be interesting to watch whether any Indian bikemaker gets around to making something like an iMT but we will surely expect to see the same transmission on the Kia Sonet which is slated for a global debut by the end of August this year.