The Hyundai IONIQ 5 EV Can Go 100km On A Five-Minute Charge!

It is based on Hyundai’s new E-GMP platform, developed specifically for its new all-electric IONIQ lineup 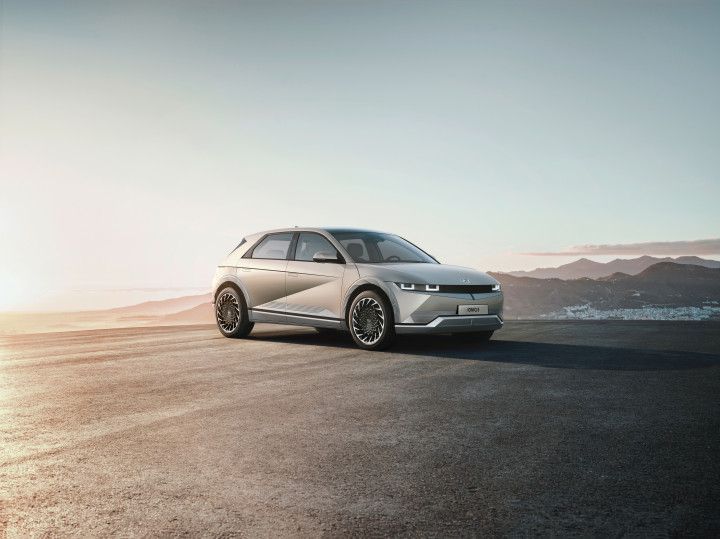 Hyundai has revealed the IONIQ 5, the first of its next generation of battery-powered electric vehicles under the EV-dedicated IONIQ lineup. It is based on the Electric-Global Modular Platform (E-GMP), which Hyundai has specifically developed for this lineup.

The IONIQ 5’s silhouette is inspired by the carmaker’s first production car, the Pony. It sits on a 3,000mm-long wheelbase and gets a free-flowing exterior design. Up front, it gets a clamshell-bonnet with minimal panel gaps to increase aerodynamic efficiency and pixel-shaped LED clusters. In profile, auto flush door handles and 20-inch alloy wheels provide a clean finish. The character lines and the aggressive C-pillar are other examples of the ‘Parametric Dynamics’ design elements, first seen in the Tucson and the 45 EV concept. The pixel-themed LED lighting is also seen at the rear.

Inside, the IONIQ 5 follows a theme called ‘Living Space’. As the name suggests, the interior is supposed to be quite airy and relaxing. Even the centre console, dubbed the Universal Island, is movable and can slide back as much as 140mm. The platform allows for the battery storage area to sit under a flat floor, clearing up more space in the cabin. The IONIQ 5’s front seats are electronically adjustable and 30 percent slimmer to make more space at the rear.

The IONIQ 5 comes with two battery options: 58kWh and 72.6kWh. It also gets two electric motor layouts: a rear axle-placed single motor for RWD and two motors placed on either axle for AWD. All variants offer a top speed of 185kmph. The top-spec AWD model, powered by the 72.6kWh battery, puts out around 306PS and 605Nm. It can go from nought to 100kmph in just 5.2 seconds! The more economical 2WD layout with the same battery offers a WLTP-claimed range of 470-480km.

For those with range anxiety, here’s the part that will put you at ease. According to WLTP, it can go 100km in just a quick five-minute DC fast charging. The 350kW fast charger only requires 18 minutes to charge from 10 to 80 percent. The IONIQ 5’s E-GMP platform can support both 400V and 800V charging infrastructures.

Another interesting function of the IONIQ 5 is the V2L, or the Vehicle to Load, technology, which allows it to act as a portable charger for electric bicycles, scooters and other devices, by providing up to 3.6kW. The port inside the car is only functional when the vehicle is running, but the exterior port can be used even when the car is turned off.

Hyundai will launch the IONIQ 5 overseas by the first half of 2021. There is still no news on whether it will arrive in India. The Korean carmaker offers only one EV here, the Kona Electric, which retails from Rs 23.75 lakh to Rs 23.94 lakh (ex-showroom). It offers an ARAI-claimed range of 452km and competes with the Tata Nexon EV and MG ZS EV.