Both models are based on the top-spec VX variant 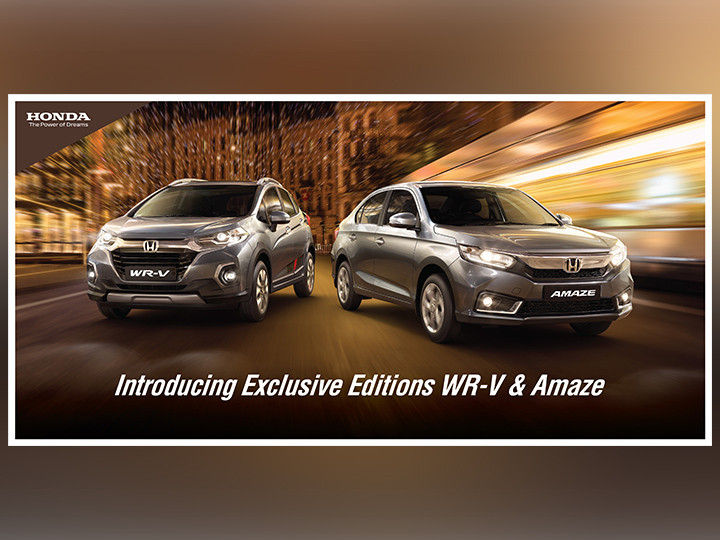 Honda Cars India already kicked off the festive season with the recent launches of the special edition Amaze and CR-V. And now, the carmaker has now introduced two new limited-run models: the exclusive edition Amaze and WR-V. Both are based on the top-spec VX variants with cosmetic add-ons. Here’s how much you’ll have to shell out for them:

Surprisingly, both the Amaze and Exclusive Edition variants are priced exactly the same as the VX variants they’re based on. That’s a major plus considering the additional kit you’re treated to. Here’s more about it:

Under the hood, the Amaze is powered by a 90PS/110Nm 1.2-litre petrol engine or a 100PS/200Nm 1.5-litre diesel engine (80PS/160Nm in diesel-CVT). Both engines are paired to either a 5-speed manual gearbox or a CVT automatic transmission.

The launch of Exclusive Edition variants further add to the appeal of the Amaze and WR-V as you don;t have to shell out extra for the additional bits that come with them. The Amaze takes on the Maruti Suzuki Dzire, Hyundai Aura, Ford Aspire and Tata Tigor. The WR-V goes up against the  Tata Nexon, Maruti Suzuki Vitara Brezza, Toyota Urban Cruiser, Hyundai Venue, Ford EcoSport, Kia Sonet, and Mahindra XUV300.