The Skoda Fabia Will Go ‘Big’ In This Generation Update

Most of the growth is thanks to the hatchback utilising the VW Group’s smallest modular platform, the MQB-A0, for the first time 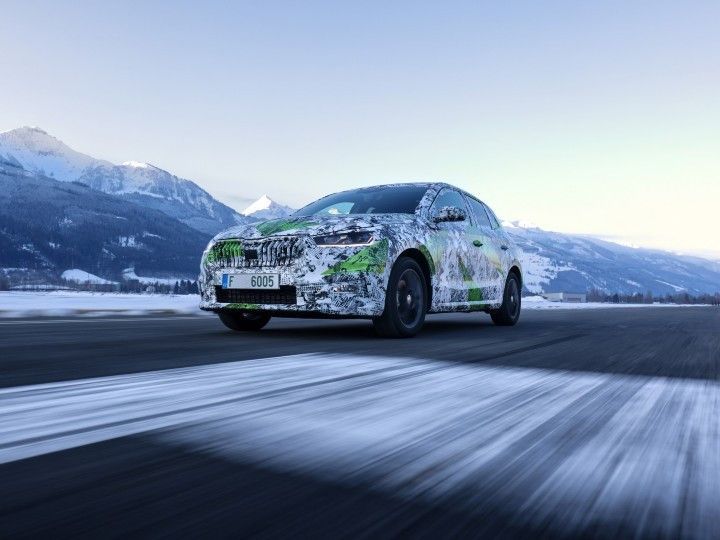 Just over two weeks back, Skoda teased the fourth-generation of the Fabia hatchback and now, the carmaker has unveiled the Fabia in the flesh in prototype form. Skoda has also spilled the beans on what to expect from the new Fabia and it would be an understatement to say it’s going ‘big’ in this generation update.

Thanks to Volkswagen Group’s smallest modular platform, the MQB-A0, the Fabia has grown significantly in length, width, and wheelbase over its predecessor -- the generation Skoda skipped for India. At 380 litres, the boot space has seen an increase of 50 litres. Fold down the rear seats and the boot space stretches to 1,190 litres. If you thought the Fabia growing bigger has come at the cost of added weight, well, Skoda claims it’s pretty close to its predecessor.

Despite the prototype model being draped in camouflage, the changes are quite evident. Aside from larger dimensions, the Fabia’s design looks sharper than before. At the front, you’re treated to a sharp set of LED headlights that extend to the butterfly radiator grille. While the rear is heavily disguised, the LED tail lamps look rather sharp. Even the roof spoiler seems larger.

Fun fact, this sharper design has led to the Fabia being even more aerodynamically efficient, with the drag coefficient being cut from 0.32 to 0.28. Another nifty aero feature is the actively adjustable cooling shutters in the front bumper’s lower air intake to aid in aerodynamics and fuel efficiency.

While Skoda is yet to reveal what’s inside the Fabia, it's likely to be spacious considering how big it's gotten. That being said, the carmaker has revealed it’ll have the Virtual Cockpit digital driver’s display as well as a central touchscreen infotainment system. The new Fabia will also come with what Skoda calls ‘Simply Clever’ features, including a folding backrest for the front passenger seat, two smartphone storage pockets on the front seat backs, a removable sun visor for the panoramic roof, USB-C socket on the rear view mirror that could be used to power a dashcam, and a removable cup holder.

Coming to the safety aspect, the 2021 Fabia will be loaded with up to nine airbags, plenty of ISOFIX anchors, and assists such as adaptive cruise control, blind spot warning, park assist, and traffic sign recognition.

Under the hood, the new Fabia will have a plethora of petrol engines on offer.  The lineup starts with a 1.0-litre MPI engine in two states of tune: 65PS/95Nm and 80/95Nm. Power is sent to the front wheels via a 5-speed manual transmission. Next up is the range of 1.0-litre TSI motors producing 95PS/175Nm and 110/200Nm. While the former is only offered with a 5-speed manual transmission, the latter gets a 6-speed manual and a 7-speed DSG automatic transmission. You can also opt for a larger 50-litre fuel tank, compared to the standard 40-litre tank, to increase the range to more than 950km.

It also gets a new 1.5-litre TSI engine delivering 150PS of power and 250Nm of torque, paired with a 7-speed DSG automatic transmission. The Fabia also sees the addition of active cylinder technology. Basically, when the engine load is low, two cylinders automatically shut down to reduce fuel consumption. The India-spec model will most likely get the 1.0-litre TSI turbo-petrol engine, manufactured in India.

The next-gen Skoda Fabia is all set to make its global debut in Q2 2021. Since the VW Group has a localised version of the MQB-A0 platform, called the MQB-A0-IN, we could get the Fabia here by 2022 alongside the new Polo. This localised platform should help in pricing it competitively. The new Fabia will take on the Hyundai i20, Tata Altroz, Honda Jazz, and the Maruti Suzuki Baleno.