Spied testing for the first time in India, the highly camouflaged unit is longer and wider than the current Thar 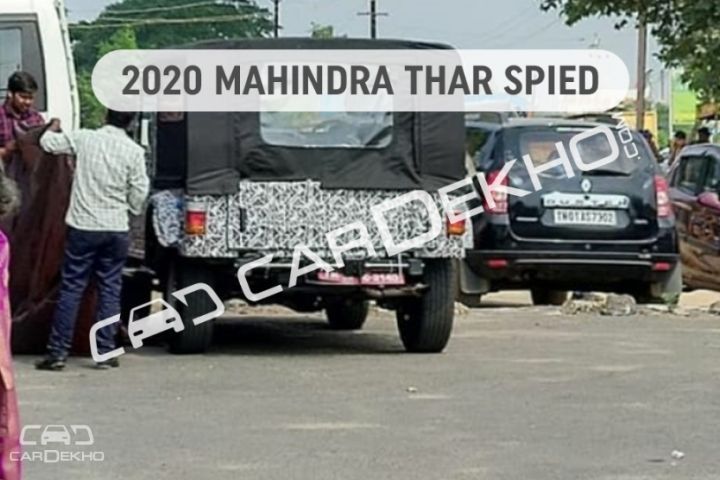 The brawny, old-school Mahindra Thar is all set to get bigger and beefier. The next generation Thar, which was confirmed to be under development by Mahindra themselves, has been spotted testing for the first time in India. And by the looks of the test mule, it seems to be both longer and wider than the current-gen model.

The camouflaged unit spotted spotted testing near Chennai, is likely to be underpinned by an all-new ladder-frame chassis developed jointly by Mahindra and Ssangyong. It is significantly wider than the current model. Heck, it even makes the Innova and the Duster parked next to it look small in comparison.

It still retains its classic Jeep CJ5 looks that came into existence back in the 1960s. Even though heavily camouflaged, you can spot the much wider wheel arches, a canopy and the longer wheelbase on the test mule. However, Mahindra has equipped it with dummy lights and much smaller tyres.

The new Thar will most likely feature an all new BSVI-compliant diesel engine under its bonnet. With the ageing 2.5-litre CRDe (107PS/247Nm) and DI (63PS/195Nm) diesel engines under the hood, the current gen Thar is unlikely to meet the new norms.

Introduced in 2010, the Thar is currently in the last leg of its lifecycle. It received a mid-life refresh in 2015 with cosmetic and interior upgrades. Boasting a retro design and a capable off-road 4X4 system, the Thar carved out its own niche in the market. But with a lack of basic safety tech and bare bones interiors, it isn’t the most easy SUV to live with and drive on a daily basis.

Mahindra would like to change that with next-gen Thar and has already confirmed that it would be a lot safer. The second-generation Thar will not only be compliant with upcoming crash test norms, it’ll also pack a newer engine and be more modern. We’re expecting Mahindra to incorporate features such as anti-lock brakes, airbags as well as some off-road gadgetry such as hill assist in the upcoming Thar, when it is likely to be introduced in 2020. The new and stricter safety norms under Bharat New Vehicle Assessment Programme will also kick in by 1 April, 2020 in the country.

Also Read: Hyundai Palisade On The Cards For India?