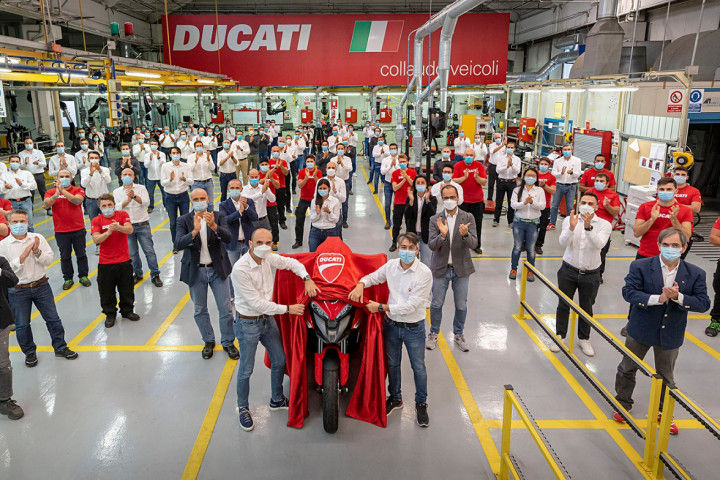 Ducati has announced that its upcoming Multistrada V4 will feature radar technology. The flagship adventure tourer will come with a front and rear radar to supplement its new adaptive cruise control. As the name signifies, the Multistrada V4 will get a new V4 motor. Details of the new motor will be disclosed on October 15.

The new technology comprises a front and rear radar module, each the size of an action camera. Both modules weigh just 190 grams. The front radar sits below the headlamp assembly and the rear below the tail lamp. In cruise control mode, the front radar detects vehicles ahead and behind the motorcycle and automatically adjusts its distance from them by controlling acceleration and braking. You can also manually adjust (up to 4 levels) the preferred distance between your Multistrada V4 and the vehicle ahead. Adaptive cruise control is activated between speeds of 30kmph and 160kmph.

The rear radar detects vehicles in the rider's blindspot as well as those fast approaching from behind and sends a warning. Ducati has not revealed how the warning will be transmitted but it is usually through haptic feedback from the handlebar grips or warning lights on the dashboard or mirrors.

Ducati’s new flagship adventure tourer is expected to share its motor with the Streetfighter V4. The new adventure tourer could offer performance in excess of 200PS, making it the most powerful production ADV in the world. It gets a new trellis frame, subframe, and swingarm to handle the extra power. According to an official teaser, the new Multistrada V4 will be lighter than its V2 predecessor.

While the new adventure tourer could go on sale in Europe by the end of this year, we can expect it to come to India early next year. Ducati could launch the Multistrada V4 at around Rs 20 lakh (ex-showroom). It will compete against other full-sized adventure tourers such as the BMW R 1250 GS, Yamaha Super Tenere ES, Honda CRF1100L Africa Twin and Kawasaki Versys 1000.