Ducati’s Flagship ADV Has Landed On Our Shores 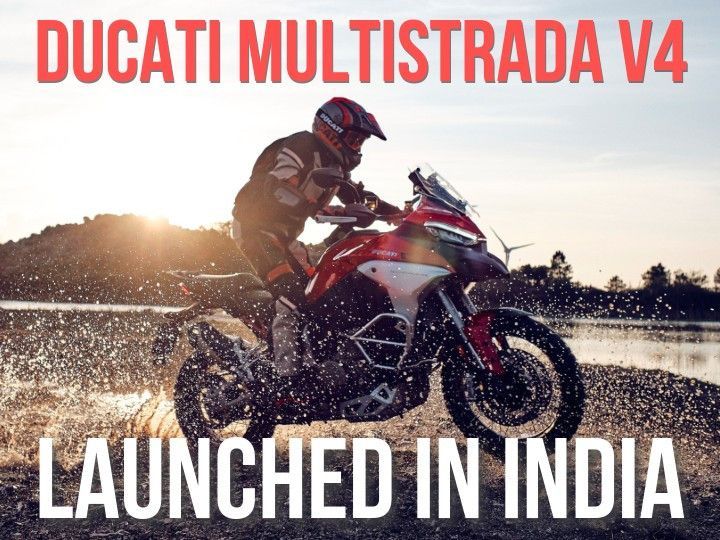 At the start of 2021, Ducati had announced that it has an exciting BS6 lineup planned for us. Staying true to its words, the Bologna factory has now launched its flagship adventure bike, the Multistrada V4, in India.

At this price, the Multistrada V4 lands right between the BMW R 1250 GS and the Harley-Davidson Pan America 1250, undercutting the former by Rs 1.45 lakh while being Rs 2 lakh pricier than the latter.

Believe it or not, the Multistrada V4 is an entirely new motorcycle, even though it looks somewhat like the ‘usual’ Multistrada.

The biggest difference between the older models and the V4 is…..well, the V4. Instead of the L-Twin heart, this Multistrada gets an all-new BS6-complaint 1158cc V4 Granturismo engine, pumping out an impressive 172PS and 124Nm, 36PS and 20PS more than the R 1250 GS and the Pan America. The motor is mated to a six-speed gearbox, which comes with a bi-directional quickshifter and a slipper clutch.

On the feature front, the Multistrada V4 gets all the bells and whistles, right from basics such as LED lighting to technological marvels such as the radar-guided adaptive cruise control and semi-active suspension. For more details on these features, head here.

Underpinnings on the Multistrada comprise a monocoque chassis, 50mm fully adjustable forks and monoshock, and Brembo M4 calipers, as standard. If you opt for the S variant, you get  Ducati’s semi-active Skyhook suspension, which automatically detects the load on the vehicle and adjusts the suspension accordingly for better balance.

Since the Multistrada is meant to munch miles for fun, it now comes with a bigger 22-litre fuel tank (Multistrada 1260 had a 20-litre unit) with a pocket on top to store your smartphone. It’s even fairly accessible for an ADV, with a seat height of 840mm and a kerb weight of 217kg.

The Ducati Multistrada V4 is one the finest ADVs out there and we’re glad it has finally arrived in India. With its modern features, underpinnings, and competitive pricing, the Multistrada V4 is sure to stir up the premium tourer segment in India, which has been dominated by the BMW R 1250 GS for quite a while now. Is the R 1250 GS’ throne in danger? We certainly think so.