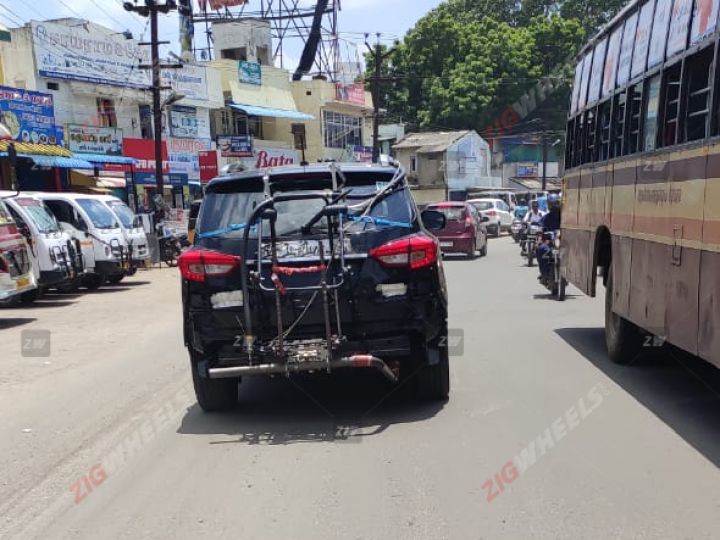 A test mule of the Mahindra Alturas G4 has been spotted undergoing emission testing in Chennai. This comes within weeks of SsangYong taking the wraps off the Rexton facelift in international markets. How are the two related? Well, the Alturas G4 is nothing but a Rexton with a Mahindra badge. So does the test mule spotted in Chennai feature similar cosmetic tweaks? Let’s find out.

The Alturas G4 comes with a 2.2-litre diesel engine that develops 181PS and 420Nm. It is currently BS4-compliant and comes mated to a 7-speed automatic transmission sourced from Mercedes-Benz. Considering the fact that the updated Rexton comes with a slightly higher-spec diesel engine that develops 187PS, we expect Mahindra to give the Alturas the same tweaks. Both models come with all-wheel drive as standard to take on the rough stuff.

Visually, the test mule spied here looks almost similar to the facelifted version sold abroad. For starters, the wheels now feature a new design and come with a dual-tone finish. Then there is the revised badging layout at the rear that doesn’t mimic that of the Rexton facelift or the current Alturas G4. While we couldn’t capture the front-end, going by the Rexton facelift, expect to find a bigger 7-slat grille and a revised bumper.

Changes on the inside are expected to be limited to a new colour-scheme a la the Rexton facelift. We expect the feature list to also remain the same. The Alturas G4 comes with features like a touchscreen infotainment system with Android Auto and Apple CarPlay, a powered driver seat, dual-zone climate control, powered tailgate, cruise control, coloured multi-info display, ventilated seats, and more.

The BS6-compliant Alturas G4 is expected to hit our shores before the implementation of new emission norms in April 2020. Naturally, expect the Alturas G4 facelift to receive a price hike. The current model is priced from Rs 27.7 lakh to Rs 30.7 lakh (ex-showroom Delhi) and rivals the Ford Endeavour, Isuzu MU-X and the Toyota Fortuner.