2021 Toyota Land Cruiser: More Modern, Cleaner, And Macho Than Ever! 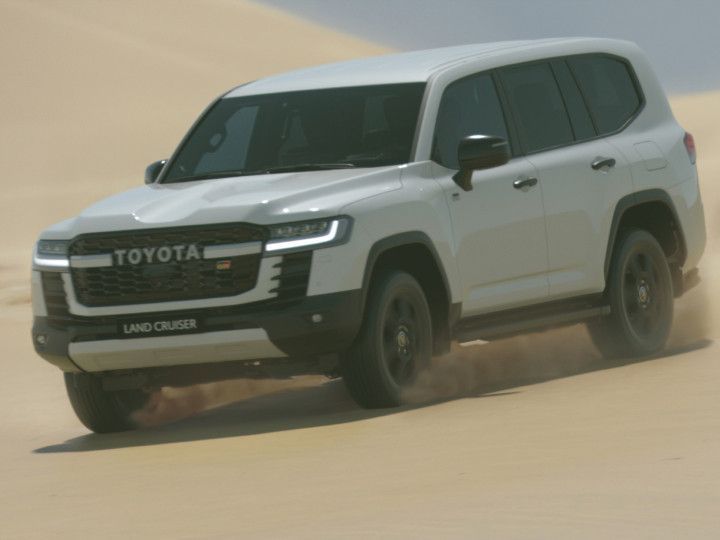 After countless spy shots, leaks and teasers, Toyota has finally revealed the next-gen Land Cruiser LC300. The SUV gets a host of changes, including cleaner powertrains and more features while retaining the macho design and off-road prowess of its predecessors.

For starters, the new SUV is based on Toyota’s new GA-F body-on-frame platform -- part of the latest TNGA family -- and is 200kg lighter than before. Toyota has achieved this by redesigning the frame and improving its rigidity. Also, the brawny V8 powertrains have been ditched for smaller and relatively efficient twin-turbo V6 petrol and diesel engines, the specifications of which have been mentioned below:

In certain markets, the Land Cruiser comes with a naturally aspirated V6 petrol engine, coupled with a 6-speed automatic transmission.

Right from the debut of the first-gen Land Cruiser BJ series, the SUV was known for its off-road prowess. Now, Toyota has made further improvements by reworking the suspension for better articulation and equipping it with drive and terrain modes as well as a terrain view monitor.

The vehicle’s size, however, remains unchanged, with the same approach, departure, and breakover angles as before. It continues to measure 5,170mm long, 1,980mm wide, and 1,930mm tall.

As for its design, the Land Cruiser’s boxy silhouette can be easily recognised on the road. The large slatted rectangular grille looks mean, flanked by sleek LED headlamps. We can bet people will give way when they see this SUV on their ORVMs. While the silhouette may be reminiscent of the previous-gen model, all the body panels have been redesigned. It also comes with new alloy wheels while the rear end gets sleek LED tail lamps and an upright tailgate.

It looks like Toyota’s engineers have spent more time on the inside, with the Land Cruiser getting an overhauled dashboard. The new floating infotainment system takes centrestage, below which is the revamped central console with knobs and buttons for all important functions. Also, Toyota has retained the good old-fashioned analogue dials.

The new Land Cruiser LC300 will make a comeback to India as Toyota’s flagship SUV at a premium over the now-discontinued LC200 that was priced from Rs 1.47 crore (ex-showroom).