Its design is inspired by the Grand Wagoneer concept 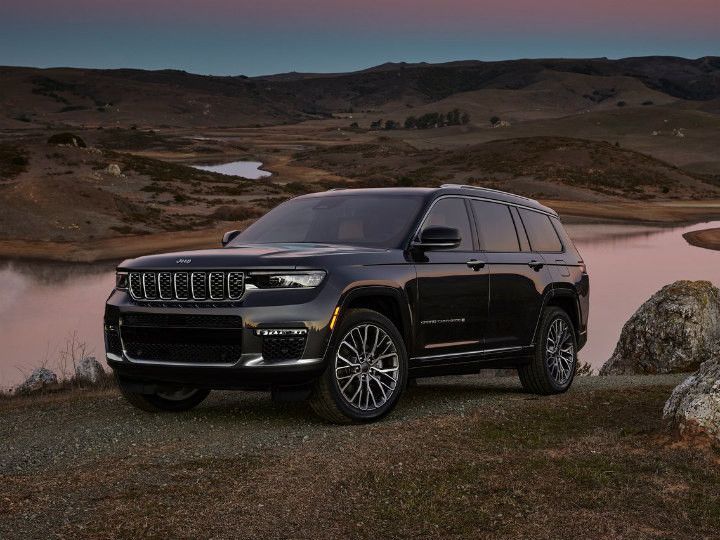 The Jeep Grand Cherokee SUV has been one of the more popular models from the carmaker globally since it debuted back in 1992. The carmaker has now unveiled the fifth iteration of the SUV in the form of the 2021 Jeep Grand Cherokee L in the USA. The ‘L’ stands for a three-row seating configuration, with the two-row setup and a plug-in-hybrid version coming later this year. It gets an evolutionary design, extensive tech, and a multitude of 4x4 drive modes.

In terms of design, the new Grand Cherokee L’s front end takes plenty of inspiration from the Grand Wagoneer concept unveiled last year. Notable bits include a prominent hood, smaller seven-slat grille, sleeker LED headlamps, and a new front bumper. The overall silhouette looks sharp like the front with a set of 21-inch alloy wheels making a debut in the Grand Cherokee. Slim wraparound tail lamps round off the evolved exteriors.

Unlike the exteriors, the cabin gets a comprehensive overhaul. Aside from the three-row setup, you get a fresh dashboard layout, a new multi-function steering wheel, new centre console, various leather finishes, and more high-quality trim pieces in wood and metal all over.

The crux of the cabin is, of course, its loaded equipment list. It gets a 10.1-inch UConnect 5 touchscreen infotainment system with wireless Apple CarPlay and Android Auto, a 10.25-inch digital instrument cluster, up to 12 USB-A and USB-C ports, a 4G LTE Wi-Fi hotspot, dual-pane sunroof, and a 19-speaker McIntosh audio system. Other tech wizardry includes a night vision camera, drowsiness detection, 360-degree camera, adaptive cruise control with level 2 autonomous driving, and a head-up display.

Under the hood, the Grand Cherokee L is offered with a 3.6-litre petrol V6 engine and a 5.7-litre petrol V8. The former makes 290PS/350Nm, whereas the latter delivers 357PS and 530Nm. Both are paired to an 8-speed automatic transmission with 2WD and 4x4 drivetrain options.

Coming to off-road capabilities, you get three 4x4 systems: Quadratrac I, Quadratrac II, and Quadra-Drive II with a rear electronic limited-slip differential. It also comes with the optional Quadra-Lift adaptive air suspension with five different modes: Normal, Off-road 1, Off-road 2, Park and Aero. At 'Normal' mode the SUV’s ground clearance measures 212mm which can increase to maximum of 276mm in the 'Off-road 2' mode and lowered to a minium of 192mm in 'Aero' mode. It comes with five terrain modes: auto, sport, rock, snow, and mud/sand. Other off-road feats include a water wading depth of up to 610mm as well as a 30.1-degree approach angle, a 23.6-degree departure angle, and 22.6-degree breakover angle while running the Quadra-Lift adaptive air suspension.

Back home, FCA has announced that the next-gen Jeep Grand Cherokee will make its way to Indian shores as a locally assembled model. The India-spec Grand Cherokee is likely to be offered in the three-row ‘L’ trim. The Grand Cherokee could be priced from Rs 75 lakh (ex-showroom) and will rival SUVs such as the Mercedes-Benz GLE and BMW X5. It is expected to reach Indian shores sometime later this year or by early-2022.