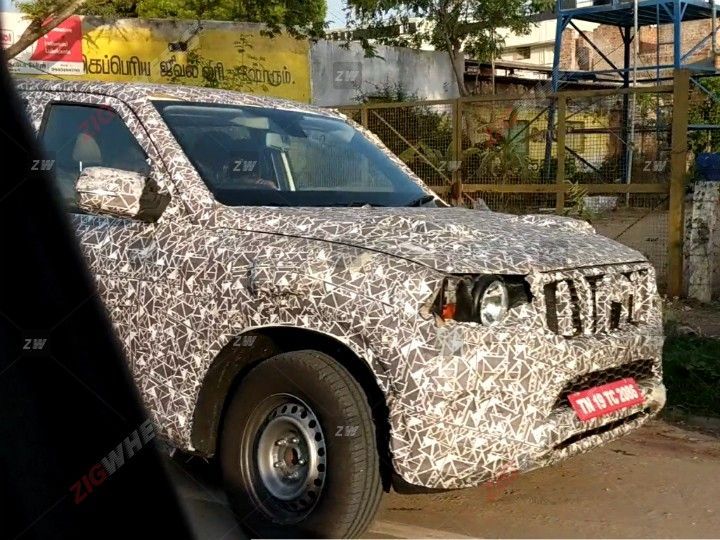 It seems like Mahindra is having a hard time hiding its upcoming Scorpio. The 2020 Mahindra Scorpio has been spied testing yet again, and this time around, it was spotted near Coimbatore undergoing full load testing. What we can clearly perceive is the fact that the new Scorpio looks bigger than the current iteration. First seen in a set of spy images that were not exactly of the best quality, it gave us our first glimpse of the silhouette of the SUV.  Now, with the set of latest images, we can make out more details about the upcoming SUV.

There is no doubt that the SUV has grown in size and now has an imposing stance. Mahindra is playing the size card and the Scorpio, being based on a ladder frame chassis, was always big in size. The grille is unmistakably Mahindra with the seven slats flanked by the boxy and rudimentary headlamps. Two air dams can be seen on the lower bumper along with cutouts for fog lamps on either side. It is when you move to the side, that the size of the SUV becomes more visible. The wheel arches are humongous, with a kink in the C-pillar that is similar to what we have seen in the XUV500. The new Scorpio looks wider and longer than before and the SUV was spotted with steel wheels, which look out of place in the huge wheel arches. At the rear, you can see the slightly raked windshield and the small tail lamps.

The new Scorpio will share its ladder frame chassis with the upcoming Mahindra Thar. The interior of the SUV still remains to be seen, but expect it to be completely revamped with new features and safety kit. Also likely to feature is a new 7-seat layout and front-facing third-row seats.

Powertrain option are expected to include new 2.0-litre BS6-compliant diesel engine in place of the 2.2-litre mHawk and 2.5-litre m2DICR diesel engines. The new motor is expected to churn out around 160PS of power and will come mated to a 6-speed manual transmission. A Magneti Marelli-sourced automatic gearbox along with a 4WD system will also make its way into the 2020 Scorpio, according to our sources. It might also come with a 2.0-litre petrol engine. The engine is currently under development and might debut post-April 2020 when the BS6 norms kick in.

The upcoming Scorpio is expected to debut at the 2020 Auto Expo. The Tata Safari Storme is the only worthy rival to the upcoming Scorpio. Other rivals with respect to price include the Hyundai Creta, Renault Duster, Renault Captur and the Nissan Kicks. Expect it to be priced at a slight premium over the current model, which retails for Rs 9.99 lakh to Rs 16.44 lakh (ex-showroom Delhi).