2019 Polo Facelift Caught Testing Ahead Of Its Launch 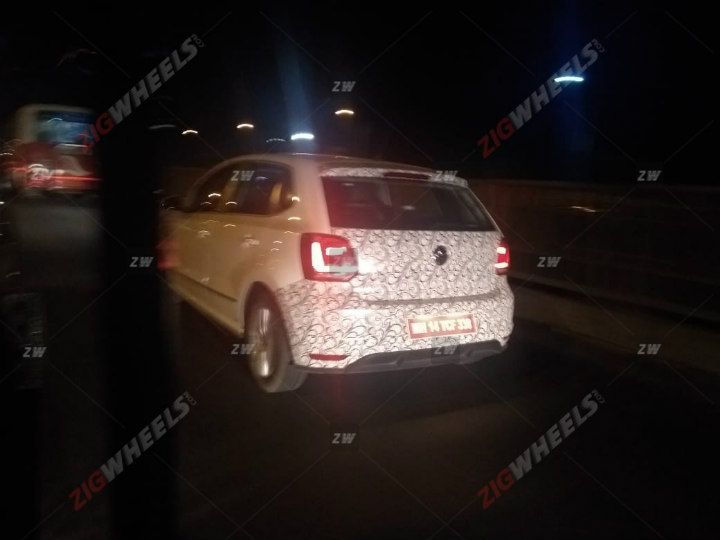 The latest iteration of the Volkswagen Polo, which made its debut in various international markets in 2017, is expected to make its way into India by the year 2020. Meanwhile, Volkswagen will launch a facelifted version of the current-gen Polo in India later this year. Expect the upcoming hatchback to be powered by BS6 compliant engines as well. A camouflaged unit of the VW Polo facelift was spied testing on the outskirts of Pune recently, revealing various details of the upcoming premium hatchback.

Although the white coloured hatchback’s front and rear sections were wrapped in camouflage, it’s pretty easy to make out subtle changes such as the revised rear bumper with the lower diffuser now finished in black. In fact, the rear bumper looks similar to the one seen on the Polo GTI. The spied hatchback also sports the GTI’s LED tail lamps. The front fascia, on the other hand, is expected to receive a redesigned bumper as well as revised LED headlights. As for the interior, expect minor cosmetic changes to keep the current-gen Polo relevant until the new one based on VW’s MQB platform arrives in 2020.

With BS6 emission norms set to be implemented from 1 April 2020, expect Volkswagen to offer the Polo facelift with updated engines that comply with the new regulations. Currently, the Polo petrol is powered by a 1.0-litre, 3-cylinder MPI engine that produces 76PS of power and 95Nm of torque. Volkswagen has hinted that it could introduce CNG-powered variants of its cars from 2020 onwards. However, that’s likely to happen with the introduction of the sixth-gen Polo only. The next-gen Polo is also likely to mark the debut of the 1.0-litre TSI turbo-petrol engine in India. Available in two states of tune -  94PS/175 Nm and 114PS /175 Nm - the carmaker has shared plans to localise the engine for the domestic market.

Although Volkswagen hasn’t mentioned whether it will update the Polo’s 1.5-litre TDI diesel motor to meet BS6 emission norms, the company has hinted that it will phase out low-capacity diesel motors by 2020. If the company plans to update the 1.5-litre engine though, expect it to be offered in the same state of tune as the current Polo - 90PS/230Nm in regular variants and 110PS/250Nm in the GT TDI.

Apart from the Polo facelift, we expect the Vento sedan to receive more or less the same updates. Expect it to be launched alongside the hatchback in India. The Polo facelift is likely to hit VW dealerships later this year and could be priced at a premium over the current car (Rs 5.71 lakh - 9.72 lakh ex-showroom India).