The all-time victory record in Formula One falls, and the MotoGP title battle gets more interesting 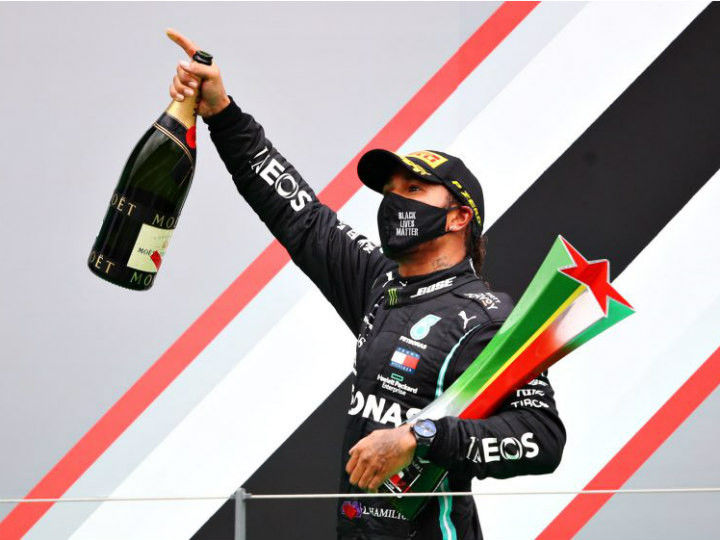 Formula One’s first visit to the Algarve circuit in Portugal saw history being made as Mercedes’ Lewis Hamilton scored his 92nd race win to statistically hold the all-time record for race wins in F1. But it wasn’t all straightforward as he had to deal with his teammate and McLaren’s Carlos Sainz in the opening stint. Following him in 2nd place was teammate Valtteri Bottas who was a whooping 25 seconds back. Red Bull Honda’s Max Verstappen rounded off the podium.

This weekend also saw both Haas drivers, Kevin Magnussen and Romain Grosjean announce their departure from the team at the end of the 2020 season. This leaves Hass for an all-new lineup for 2021 with names like Mick Schumacher, Nikita Mazepin, and Callum Ilott  being considered for those seats. With only five rounds to go, Lewis Hamilton’s 7th world driver’s title looks all but a formality. Racing action will resume when F1 returns to Imola after almost a 14 year hiatus from October 29-31.

MotoGP’s return to Aragon for the Teruel Gran Prix saw a new rider launch himself into the title fight in the form of Franco Morbidelli winning for Petronas Yamaha SRT. Last week’s race winner Alex Rinz took second for Suzuki with teammate and championship leader Joan Mir third. Initially, it was LCR Honda’s Taka Nakagami who led after starting on pole. But the Japanese rider’s race ended quickly with a crash in turn 5. That pretty much left Morbidelli and Rinz to fight for the lead and stay there till the chequered flag.

This race weekend was also an historic day for Honda as Jaume Masia’s win with Leopard Racing  in the Moto3 class is Honda’s 800th win in an FIM World Championship Grand Prix event with the first win by Tom Phillis all the way back in 1961. Going back to the 2020 MotoGP riders standings, Joan Mir stretches his lead to 14 points from Petronas Yamaha SRT’s Fabio Quartararo. Franco Morbidelli’s win catapults him to 4th overall and just 25 points off the leader with 3 rounds to go.

Kush Maini had a damage limitation run of results at round 19, 20 and 21 of the 2020 BRDC British Formula 3 Championship at Donington Park. Qualifying 9th for round 19, the Indian driver finished 9th at the line, and then recovered to 4th in the next race. The final race of the weekend saw Kush Maini improve to 3rd in the end. With championship rival Kaylen Frederick winning two races, Kush Maini now trails Kaylen Frederick by 13 points with only three rounds to go. The season finale will occur at Silverstone from November 7-8.

More calendar updates were announced for the 2020/21 FIA ABB FIA Formula E World Championship with the opening four rounds confirmed. The first two rounds will be held at Santiago from January 16 to 17 with the third and fourth round at Diriyah on February 26 to 27. The races at Mexico City and Sanya have been postponed indefinitely, with more races set to be confirmed in 2021.