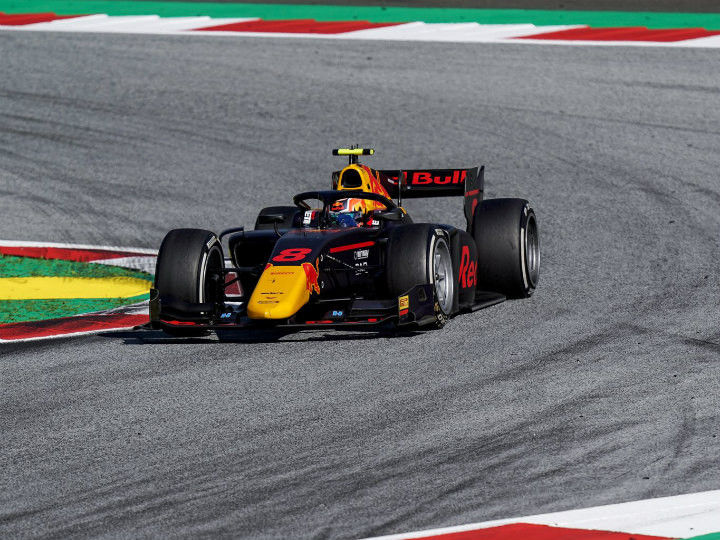 Carlin’s Jehan Daruvala had a much cleaner race as the 21 year old from Mumbai finished ninth in the second round of the sprint race of the FIA Formula 2 Championship at the Red Bull Ring circuit.

Carlin teammate and fellow Red Bull junior driver Yuki Tsunoda had technical troubles early on and had to retire from the race after starting seventh.

Unlike the frenetic feature race yesterday, the sprint race was run in completely dry conditions. Daruvala was closely matched with the midfield and was helped by retirements by Robert Schwarztman, Mick Schumacher as well as his teammate Tsunoda to be 9th early on.

As the 28 lap race went on, Daruvala was locked in a close fight for 6th with Jack Aitken, Sean Gelael and Nikita Mazepin. But since the cars ahead of Daruvala also had the use of Drag Reduction System (DRS), it was more like a 4-car train going around, with neither getting enough of a slipstream advantage to make a pass.

This train carried on to the end of the race which led to Jehan Daruvala finishing in 9th place. And since this was the sprint race, the Indian driver was just one place off the last points scoring position in 8th to score his first point of the season.

The opening two Austrian rounds may not be the best of starts for Jehan Daruvala, but he can take some solace in the fact that he had a cleaner finish to round 2. The F2 circus will return to action next week from July 17-19 at the Hungaroring Circuit for round 3 of the FIA Formula 2 Championship.