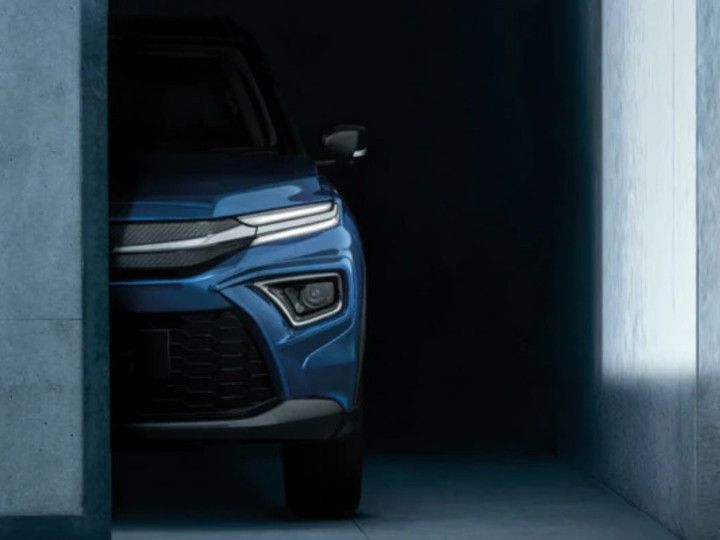 Toyota is all set to unveil its proper crack at the intensely competitive compact SUV segment, the Urban Cruiser Hyryder. Developed on a Suzuki architecture, the compact SUV is set to come with plenty of firsts for India and it’ll also have a non-identical twin from Maruti Suzuki. Here’s a five-point guide on what Toyota’s newest entry in India will boast:

Judging by the teasers and earlier leaks so far, the Urban Cruiser Hyryder boasts a bit of muscle starting with that beefy bonnet. There’s also a bit of Glanza inspiration thanks to split LED DRLs connected via a chrome strip, and a massive air dam. Other notable bits we’ve noticed so far are wrap-around tail lamps with C-shaped LED light guides being connected via a chrome strip and a hybrid badge on the front doors.

It looks like we’re set for a premium cabin look from the sole teaser video of the cabin, courtesy of a soft-touch leather section on the dashboard, chrome accents on the door trims, as well as a dual-tone black and chocolate brown layout. The centre console seems simple, yet functional with buttons all over, and no rotary knobs or touch-sensitive bits.

The Urban Cruiser Hyryder is slated to come with a slew of features including a 9-inch Suzuki touchscreen infotainment system, a 360-degree camera, automatic climate control and connected car tech. Also, expect a wireless phone charger, head-up display and a sunroof.

A Lot Of Firsts

Series production of the Toyota Urban Cruiser Hyryder will commence in August at Toyota’s Bidadi plant in Karnataka, which suggests a launch sometime in early September. Select dealerships have also commenced unofficial bookings across the country. Prices should start from Rs 10.5 lakh (ex-showroom) and the compact SUV should take on the Hyundai Creta, Kia Seltos, VW Taigun, Skoda Kushaq, and the MG Astor.