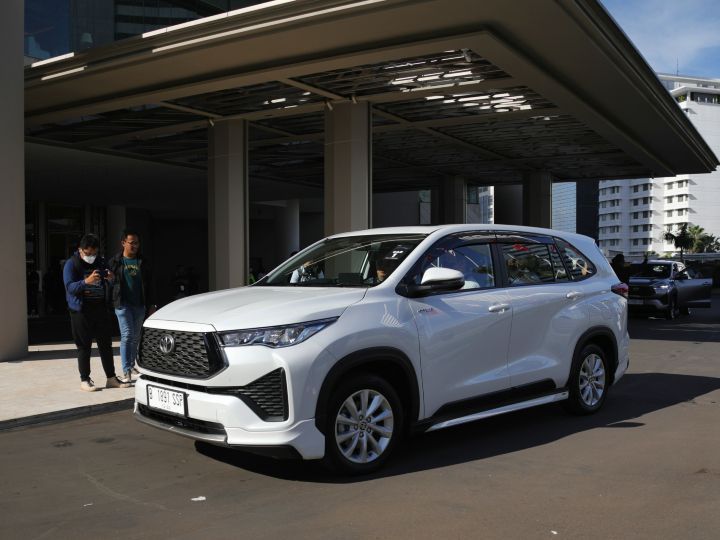 Toyota has just taken the covers off the new-generation Innova Hycross. The new MPV is radically different from its predecessor and features a slew of ‘firsts’ for the nameplate. The Innova Hycross carries the same moniker as the previous generation, but it isn’t a replacement for the latter as the new-gen Innova and the Innova Crysta will be sold together.

Here are 10 images detailing everything you need to know about the Innova Hycross:

The design of the new-generation Innova is an evolution of the Innova Crysta. At the front is a larger grille flanked by sharper and sleeker LED headlights. Below it is a triangular-shaped faux air dam element spanning the width of the bumper.

In profile, the Innova Hycross still has a van-like silhouette. However, elements like the flared wheel arches that reside above the large 18-inch alloys and the sharp creases give it a bit more character and beef up the overall design.

Its upright stature is highlighted when looked at from the rear. The taillights are sleeker and a ‘Hybrid’ badge can be seen on the lower right-hand side, indicating its hybrid powertrain, which we’ll be talking about in a bit.

Changes on the inside are radical compared to the changes outside. A new layout can be seen for the two-tone dashboard, housing a floating 10-inch touchscreen system followed by the neatly laid out central console.

The MPV continues to be offered in a six and seven-seater configuration. The former gets a leg rest, allowing you to stretch out and laze your legs on it for additional comfort. Plus, the Innova pampers rear seat occupants with separate entertainment screens as well.

Features on the inside include everything you could wish for, but for the first time, the Innova gets a panoramic sunroof, alongside a 360-degree camera and digital instrument cluster. Other creature comforts include Apple CarPlay and Android Auto, automatic climate control, cruise control, steering-mounted audio controls, and keyless entry with push-button start.

The biggest difference onboard the new-gen Innova lies under its hood. Out goes the traditional diesel mill and in comes a 2.0-litre, strong-hybrid petrol powertrain with an output of 186PS and 187Nm. There’s also a 2.0-litre petrol powertrain on offer producing 174PS and 205Nm. Power is delivered to the front wheels only, unlike the rear wheel drivetrain offered in previous generations.

The MPV’s strong-hybrid powertrain will allow for EV-only maneuvers, although the electric drive range is unknown. It is paired to an e-CVT transmission, while the petrol powertrain gets a CVT only.

Toyota will unveil the new-generation Innova Hycross in India on November 25. It is expected to be priced at around Rs 20 lakh (ex-showroom) and will be sold alongside the Innova Crysta. It will be a more premium alternative to the Kia Carens and Mahindra Marazzo.