This Citroen Concept EV Is A Pint-sized Hummer Lookalike

In a world of complex tech and a smorgasbord of intelligent features, the Oli stands out in its simplicity 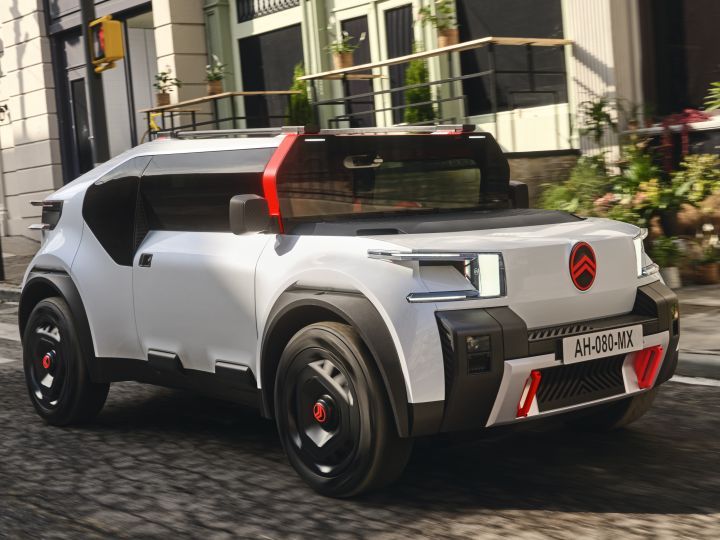 Citroen has gone back to the drawing board with its all-new electric concept, the Oli (pronounced all-e). It’s a funky-looking EV with unmatched functionality and simplicity that debuts the new Citroen logo alongside the brand’s vision for future EVs.

The reason the Oli looks so odd is because – in Citroen’s words – it’s not just a car, but a functional accessory that remains usable even when parked. In the above video, you can see it being used as a stool to get up a tree and a bed for sky-gazing.

Citroen has paid great attention to eco-conscious construction. The exterior of the Oli uses recyclable composite materials, such as the 100% recyclable bumpers that are made from 50% recycled materials.

The Oli’s left and right doors, wheel arch protectors and front and rear bumper parts are all identical components that are less complex to manufacture or replace. Even its white paintwork is greener with the lowest amount of organic compounds.

The Oli is a two-door compact car but it can easily seat four people. The front seats have mesh backs to make the small cabin feel more airy. They also have a flexible plastic ‘cushion’ that mimics the brand’s Advanced Comfort bump-absorbing seat design.

At the front, there’s a thick beam from which the dashboard and steering are suspended. Citroen claims that the Oli’s dashboard is made up of 34 parts, about half compared to the average hatchback.

The Oli also has a sliding power rail in which either front or rear passengers can plug in a phone for charging. In fact, the EV features vehicle-to-load (V2L) to power devices like an e-bike or a hair dryer as well as vehicle-to-grid (V2G) tech to power a house!

There’s a lot in the Oli that we hope to see in future Citroen EVs, such as its washable floor, sliding power rail, and V2L and V2G tech. Importantly, its focus on reducing costs by keeping the car simple is something not just Citroen, but other carmakers should be looking at as well.

Other than these improvements, the EV also debuts Citroen’s new EV powertrain that delivers 400km of range from a 40kWh battery. There’s no word on the powertrain and e-motor, but that’s likely to be tailored to specific EV models.

Closer to home, we eagerly await the introduction of Citroen’s first all-electric model for India that’ll be based on the C3 hatchback’s underpinnings. After seeing the Oli and the carmaker’s vision for simplicity, we are even more excited about the upcoming C3-based EV.

It remains to be seen if any of the Oli’s tech, including its 40kWh battery, will make it to the India-spec EV. Nonetheless, the recently launched and astonishingly affordable Tata Tiago EV has our hopes high for Citroen’s EV as well.