Honda’s second generation Amaze is much more than a new sub-4 metre sedan. But is it enough? 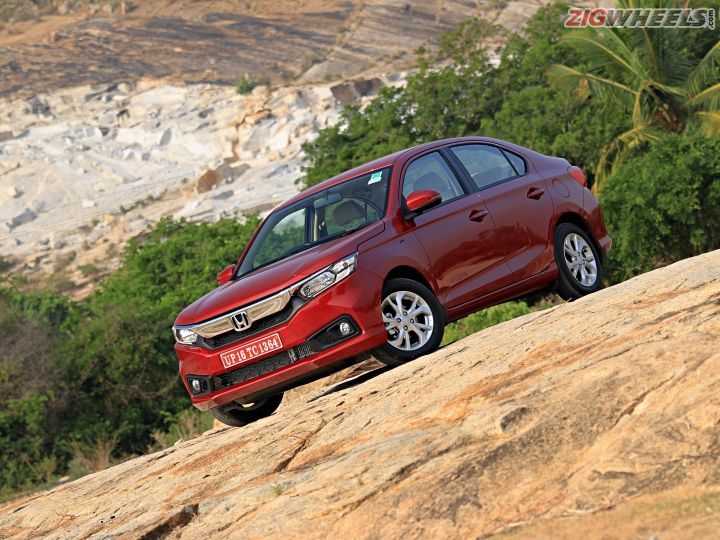 Many of us enthusiasts have grown up revering the genius of Honda, a company led by engineers. In a highly value-conscious market brand Honda won over car buyers even while striking a hard bargain. Remember the no-diesel years, or the City without a CD player? But, over the last few years Honda’s magic wore thin. The good news is, Honda says they have corrected course, the proof of which should lie in the second generation Amaze. So, can the new Amaze jump to the head of the sub-4 metre sedan segment? And can it prove that Honda is ready to be Honda once again? Let’s find out.

Is the Amaze more upmarket now?

The cabin experience in the previous Amaze was quite disappointing -- that was, until the facelift came about. The second generation Amaze is taking this challenge head on. It takes a leaf out of its elder siblings’ design book to make a unique statement. The face, depending on where you stand, reflects the BR-V or City. On the outside the stubby boot gets split tail lamps that are inspired from the new Accord. The new Amaze looks larger than the outgoing model. While it is wider by 15mm and just 5 mm longer, the flat hood and stubby rear come together to make it look more substantial.

On the inside, like the new CR-V, the vents that sit on top of the dashboard and the touchscreen jut out to give it a more technical look. The chunky steering wheel also looks like it could have been borrowed from a bigger Honda. Drivers will appreciate the new, cleaner looking instrument cluster which has just two dials with the MID in the centre. A white backlight makes it more soothing too.

The steering wheel feels great to hold and the different three dimensional profiles for the switches makes it much easier to “feel” out the right one even while driving. However, the hazy finish of the plastic buttons is a bit disappointing. The overall dashboard design is simple if a little tall, with the piano black band adding a sense of premiumness. A few irregular shut lines, especially around the glovebox, a very flimsy plastic panel on which the USB ports are mounted, and the hard plastics on the dash dampen the otherwise more appealing cabin experience.

So, is it better equipped?

The Amaze is making a much needed leap forward on this front. With regards to safety, ABS with EBD and dual airbags are offered as standard. Adjustable headrests on the front seats improve the protection level. The driver also gets treated to a reversing camera along with rear parking sensors. The latter is a feature even the City doesn’t have! Cruise control is also on offer here, however, only on the manual variants.

In terms of features, the Amaze misses out on a few wow elements offered by the competition. The Honda has LED DRLs, but it misses out on LED headlamps or projectors, and it doesn’t have automatic headlamps either.

Honda’s Digipad infotainment system, which has been a pet peeve of ours, has been fixed too. The Digipad 2.0, offered only on the top end VX variant, is responsive to touch inputs, works smoothly and now also packs in Android Auto and Apple CarPlay. The infotainment system also packs inbuilt maps which offer a very smart and easy to use experience. The menus are also easy to use, however the sound quality from the 4-speaker setup is a bit dull.

This being a Honda, you get plenty of storage spaces to keep your phone while charging it, front and rear. All four doors have generously sized pockets that can take 1-litre water bottles. Also, the 420-litre boot is now the largest in the class, topping the Tata Tigor by just 1 litre!

Can this sub-4 metre sedan offer a proper sedan-like experience?

The answer is in the back seat, where the Amaze feels truly spacious. The new platform offers a wheelbase that is 65mm longer than before. This, Honda claims, has increased kneeroom for rear occupants by 40mm. We will admit that it feels pretty much on par with the Dzire on this front now. Also, as there is room under the front seat it is easy to push your feet forward to stretch out. Taller occupants would also be fairly comfortable as headroom has increased by 10mm. Honda also claims to offer 45mm more shoulder room than before, and it feels generous too.

And no, we haven’t forgotten -- the Amaze doesn’t have rear air-con vents, but Honda has increased the compressor capacity for faster cooling in Indian summers. In Bengaluru’s 30 deg-plus climate, neither the air-con nor we broke a sweat.

But what seals the experience here is the fantastic ride quality. Using more high-tensile steel, the Amaze’s new platform manages to be stiffer and lighter. This has allowed for a thorough recalibration of the suspension, and as you roll over the bad stuff, you’ll feel it. Or rather, you won’t. Stepping up from 14” to 15” rims and tyres has helped too, but the weedy 175-section tyres remains unchanged.

From the business seat you realise that while the suspension lets you just float over poor surfaces, it feels composed and cocooned on highways. Its high-speed confidence would make you think that this is a car that’s bigger than four metres. Details, like the steering, have been worked out well too. The steering won’t keep you guessing and weighs up well, so over longer distances you will be able to relax. The only thing you need to get used to is the brake pedal, as the bite comes in only as you push a bit deeper than expected. However, the front disc and rear drum setup isn’t shy to shed speed.

Honda offers the 1.2 petrol with the CVT and manual transmission options. This 1199cc, 4- cylinder engine still makes 90PS of power and 110Nm of torque. Yep, same as before. However, Honda has tweaked the internals to improve efficiency and smoothness.

The 1.5-litre diesel engine is also rated at 100PS and 200Nm for the manual. However, to reduce noise and vibration the block stiffness has been increased, a new layer of damping material has been added on top of the head cover and there are new engine mounts too. Then, to be doubly sure, Honda has gone crazy with sound deadening blankets in the engine bay. Under the hood, on the firewall, under the engine and inside the cabin too, there’s more absorption material to improve the in-cabin experience. The manual gearbox is a new five-speed unit that is lighter and more efficient too. The diesel is also offered with a CVT automatic gearbox, for which the engine’s output is capped at 80PS and 160Nm.

Yep. That’s a bit of a sore point. This engine just isn’t peppy enough for anything more than city commuting. We drove only the manual version on the drive, and light throttle inputs give you the desired results. But, put your foot down for anything brisk or speedy and you better be prepared to shift down and rev to high heaven. Expect this to be somewhat annoying when tackling ghats, and plain annoying if it is loaded with passengers and luggage.

On the upside the changes to the engine make it feel smoother and quieter now. Honda claims fuel efficiency to have increased by 1.5 kmpl, to 19.5kmpl.

No boom. Or thunder. Or roar. Believe it. The first surprise is at startup. The low hum from the engine bay makes you wonder: Is this the i-Dtec? A leopard changes its spots! Sure, it isn’t whisper quiet, but its not annoying any more. Even when you accelerate hard, the diesel rumble is low enough for us to wonder: Is it as low as the competition now? In our books that is a massive win for Honda, especially when you package in the excellent drivability on offer from the i-Dtec.

In the city you will appreciate the gusto with which it responds to taps of the accelerator. The new five-speed gearbox has a short throw and is super slick to use. On open roads the Amaze revs up without faltering and gobbles kilometres. Yes, it revs to only about 4000rpm but in fifth it reaches its electronically limited 145kmph speed at just about 3200rpm. Honda say the speed cap is to ensure a balanced package without raising costs.

Honda claim a fuel efficiency of 27.4 kmpl which is 2.4kmpl more than before. Part of the credit in efficiency would also have to be attributed to the weight savings.

In theory the diesel and CVT combination is far from ideal as CVTs don’t like to handle high torque outputs, while diesels are high-torque engines. But Honda has been clever with this. Even after limiting the torque output, the CVT gets access to a torrent of twisting force from low rpms. You do not miss a manual gearbox or paddle shifters as the CVT will do what you want and as quickly as you want just by watching what your right foot does. On the CVT equipped diesel, the noise, vibration and harshness levels are lower than expected but, the manual is a shade quieter. Nonetheless, if you wanted a refined diesel commuter this would tick the box.

Honda claims that while accelerating from 40 - 100kmph, the CVT is a few seconds faster than the AMT-equipped competition.

Yes, but there are a couple of points to note: The fuel efficiency of this auto is lower than the manual by about 3kmpl. Sure, no biggie. But the CVT’s gap in power by 20PS and torque by 40Nm is felt when you hit higher speeds. So, for long highway stints, don’t plan on rushing through the kilometres.

Also, the diesel CVT is available only in the V variant, which is one step below the top. While this has been done to keep the price on the right side of 10 lakh rupees, you do end up missing out on a lot. There’s no touchscreen infotainment system, no reversing camera and no cruise control. Which means, the CVT variant, which is likely to be the most expensive Amaze, feel a little lacklustre to potential buyers.

So the Amaze sets new benchmarks in some areas, and impresses in others. The spaciousness and ride comfort are clear highlights, which is then backed with solid all round ability. In our books the petrol engine’s appeal is limited, leaving the limelight to the diesel manual and CVT combinations. So, the Amaze has answered the two key questions quite well: this Honda deserves to sit at the front of the sub 4-metre pack. Despite the more sophisticated package and higher equipment levels Honda has priced the Amaze at par with the outgoing model and right alongside the very capable Maruti Suzuki Dzire. The only dampener is that these are introductory prices for the first 20000 bookings. So, for now, the Amaze makes for a very capable and compelling compact sedan. And on the second front, there’s no doubt about it: Honda has taken the right steps to be respected and revered once more.