The Honda Amaze impressed us when we first drove it back in April, does it continue to do so after our rigorous real-world tests? 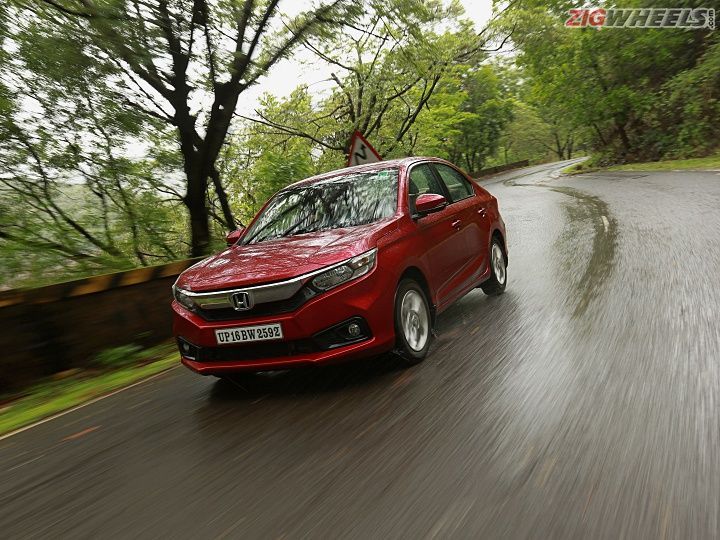 We were excited to take the new Honda Amaze for a comprehensive spin. What was more exciting though was that this Amaze has the much talked about first-in-class diesel-CVT combo. Here’s what we found out after putting it through our tests.

How much does it cost?

What are its specs?

Does it look good?

- Take a look for yourself, what do you think? It certainly divided opinion in the office

- It is clearly a Honda. Signature elements like that unmissable chrome-wing grille garnish and the large headlamps bring the design closer to big Honda cars like the Civic.

- There are LED strips in the headlamps, but they are not DRLs. You will have to switch them on every time you start the car for that ‘cool’ look.

- The 15-inch wheels complement the boxier design of the Amaze now, better than the puny 14-inch units did on the previous-gen model

- The taillamps are also signature Honda design, mimicking those of the Accord on sale internationally

- While we don’t usually like extra chrome on the car, the Amaze could do with some on its bootlid - especially in its signature ‘Radiant Red’ paint. You can get chrome accessories from the Honda dealership to help give that big boot some visual relief

- The Amaze did not turn as many heads as we had expected it to, surprisingly. But that could be because it was raining quite heavily

Does it feel good inside?

- The chunky steering, watch face like large dials in the instrument cluster and piano black inserts on the dashboard and door pads also add to the premium ambience
- The feeling of space in the Amaze is also courtesy the fact that it has the widest shoulder room (along with the Ford Aspire) at the front, out of all cars in its segment

- Rear seat experience was high on the priority list for Honda while designing this all-new Amaze, and it shows in the numbers too

- While the numbers may show that Honda has compromised front passenger space for increased room at the back, it is not a deal breaker. Those thinking of using the Amaze as a two-seater primarily should take note though.

- Surprisingly, the Amaze’s boxy exterior design has not allowed for too much rear passenger headroom with even mid-5 footers finding their heads quite close to the roof.
- Combine this with the non-adjustable headrests and taller passengers may find the rear seats of the Amaze a bit lacking during long journeys.

- In short, while the overall space is bigger in terms of numbers, it has not been utilised in the best way possible
- You may have noticed that there are no dedicated A/C vents for the rear passengers, trust us the Amaze doesn’t need them

- Honda has fitted a more powerful compressor from the City to keep the cabin cooler than the previous Amaze and it worked brilliantly. In fact, even on a hot day (one of those surprising ones that fry your scalp off in the middle of the monsoon season) we seldom set the temperature below 25-degree celsius

- Fun fact: We froze ourselves during the mileage runs, during which as a rule, the A/C temperature is kept at 24-degree celsius

Cost cutting shouldn’t be this obvious

- While Honda has added sound deadening material at the front, there is some lack of it at the rear. The diesel engine clatter has been significantly reduced but road noise creeps in at almost all speeds, especially at the rear.

- The lower centre panel which houses the 12V socket and USB port flexes on touch! At first, the panel flex made us worried that we had broken something but that’s how it is.
- There’s also this weird spot just behind the steering which lets in more engine noise than other parts of the car, maybe there is less insulation there

- The head unit of the infotainment system really feels out of place in this cabin, Honda should let the customers decide if they want features like a touchscreen or not, rather than not offering one at all.
- The glovebox lid also flexes and tends to open on its own if the car experiences a particularly bad stretch of road - this is not the quality we would have expected from a car that costs more than Rs 10 lakh on-road

- Some exterior plastic trim was already peeling, not a good sign

- Honda went back to the drawing board to make the 1.5-litre iDTEC motor quieter and less viby and it shows
- Diesel clatter is significantly less than before, which makes for a quieter and more comfortable overall interior experience
- While Honda has reduced the overall power (80PS instead of 100PS) and torque (160Nm instead of 200Nm) for the CVT variant, the drop in performance is not noticeable at all thanks to the CVT transmission

- The smoothness of this combination makes us wish Honda introduces it in more of their cars
- During the first drive, we were worried that the diesel-CVT would not be very efficient, the claimed mileage difference between the CVT and manual diesel variants is almost 8kmpl! (19.5kmpl for the diesel-CVT vs 27.4kmpl for the diesel-MT)
- But the real-world mileage tests threw these concerns out the window

- The CVT allows for a shiftless experience which really makes the Honda Amaze a treat in the city
- The diesel engine has the low-end torque to tide over the rubber-band effect typical of CVTs
- As the engine has enough grunt in the low end, the revs never need to rise too high to get the car moving which in turn means even less noise in the cabin

- The slightly heavy steering wheels and a suspension that tends to bob at higher speeds makes the Amaze less of an ideal highway/ghat car
- At city speeds, the suspension has a stiffer edge but handles bumps very well. Sharper bumps are transmitted as an audible thump, but you don’t feel it
- The higher suspension compression can cause the Amaze to bottom out on larger potholes/speedbreakers. So, it is advised to keep the speed in check over such obstacles

The Honda Amaze V diesel CVT should rank high on your list if you need a diesel-sedan primarily for the city. The improved cabin space, comfortable seats, powerful A/C, quieter cabin and a decent array of features make this a good place to be in. The suspension is supple at lower speeds, while the diesel-CVT combo makes sure your drive is made even more hassle-free and comfortable. There are only two deal breakers in the new Amaze, its price and the surprising build-quality issues. At Rs. 9.11 lakh, ex-showroom Delhi, the Amaze costs almost Rs 50,000 more than its main rival the Maruti Suzuki Dzire ZDi AGS, with nothing extra on offer. Honda’s age-old reputation for building good quality products also takes a hit, which could make owning one less of a joy for some. Buy it? Yes. But only if it meets your priorities perfectly.