Can the Hexa help Tata reclaim ground in the thriving SUV segment? 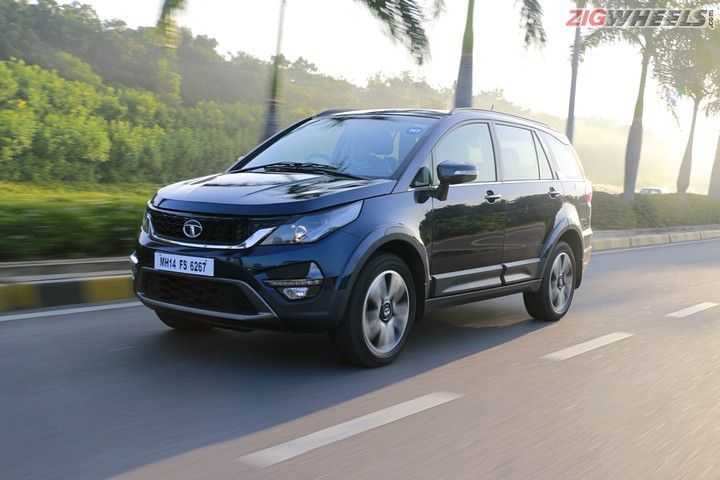 The drubbing that Tata’s large MPV, the Aria, suffered in the market place can be attributed to two shortcomings, both of which were amply highlighted by two of its rivals. Firstly, the Aria wasn’t appealing enough. Its MPV-like form paled in comparison to the distinctly SUV design of Mahindra’s XUV500 that followed into the market shortly after. Secondly, Tata and the Aria couldn’t pull off the price premium like Toyota’s Innova did, and continues to do so. Now over five years after the Aria hit the market, Tata is aiming to shake things up with an SUV, so they say, derived from the Aria, the Tata Hexa. On our first drive, we find out just how much of an SUV the Hexa really is and just how different it is from the Aria before it.

From front and centre, the Hexa strikes the right note. Having seen the other test-drive Hexas coming up in the mirrors during our drive, I knew it had the “get out of my way” quotient down pat. Tata say that every panel on the Hexa has been redesigned, so nothing is shared with the Aria. It clearly feels that way. Up close you can see that the aggression is crafted with class. There is a bull-horn like chrome strip sitting along the bottom of the grille. Gently rounded hexagonal forms texture the grille, giving a sense of keen attention. The clamshell bonnet with its masculine lines and the gaping air vents below give the Hexa’s claim to being an SUV quite a boost. The double-barrel headlamps are the only familiar bits here.

Switch around to the other end and you will see that there is a distinct squareness to the design. The small spoiler also accentuates a more upright stance. The slim D-pillar-mounted tail lamps have been done away with; instead there are chunky angular lamps that wrap around onto the tail gate. There’s enough chrome on the tailgate to please most Indians. The only awkward bit at the rear are the hockey-stick shaped lights that sit on the bumper.

Viewed from the side, the connection to the Aria is all too obvious. But, the rugged cladding and the 19-inch wheels help the Hexa strike a strong pose. The drop down elements from the roof towards the D-pillar and the fin on the shoulder give it a distinctive look. This is where you realise the Hexa is massive – it is longer and wider than the Mahindra XUV500, and the Innova Crysta. Its 2850mm wheelbase is also the longest, albeit identical to the Aria. There are clear benefits of these dimensions as we can see on the inside.

Let’s take this from the back. Lift open the tail gate, even with the third row up, you have 129 litres of luggage space in the Hexa. That is good enough for a short weekend trip. However, if you flip the third row down (they won’t fold flat), you probably get enough space to pack for a round-the-world voyage.  But the biggest benefit of the size is for the passengers. Tata offers a bench seat version of the Hexa, however it is the six-seater that is the one in focus.

Pratap Bose, Head of Design, Tata Motors, shared that it was the captain seat equipped six-seater version that gave rise to the Hexa name. Sitting on those seats, the sense of space is evident, as you can slide them to liberate enough room for even the tallest passengers. Passengers will be able to spend long hours in these seats without complaint as they are well contoured, although larger passengers would have preferred a bit more width. As before, there are B-pillar-mounted air-con vents aside from a floor-mounted console and there are manually operated sun-blinds, too.

The surprise though has to be the third row, which is genuinely usable even for full-grown adults. Tata Motors say they have made changes to the floor pan to help improve the usability of the third row. While you still sit a little knees up and the roof not too far off, this would be one of the most usable third row seats we have sat in.

Jump straight into the front and you are greeted by a whole load of technology and design, but there is a sense of familiarity. The dashboard top design is the same as the Aria and it packs two gloveboxes as well. However, the centre console is completely redesigned. It wears a handsome look and the way the 5-inch infotainment system sits recessed reminds us of the Hexa’s English cousins. The system offers new features that allow passengers to collaborate to create playlists, or to use their mobile phones as remote controls for the infotainment system.

The Hexa is loaded with equipment, and the 10-speaker JBL system is a highlight. It has been fine-tuned to suit the Aria’s cabin over 1000 hours! Another nice touch is the colour screen that sits nestled between the driver’s instruments. While we didn’t get a chance to try it, the Hexa has 8-colour mood lighting. More importantly, the Hexa packs six airbags, ABS, ESP and traction control. In terms of quality, the Hexa still uses many hard and tough plastics, but the real grouse is that there are still a few niggles, like ill-fitting plastics that detract from the in-cabin experience.

While the Hexa’s engine has been derived from the 2.2-litre unit seen in the Aria, in its Varicor 400 guise it has been extensively revamped. Girish Wagh, Sr Vice President, Product Planning at Tata Motors, explained that the block, head, intake and turbo systems have been revamped to deliver higher power and torque density and greater levels of refinement. The four-cylinder engine makes 156hp and 400Nm of torque which is channelised through a 6-speed manual or a 6-speed automatic. Upon start up, the engine feels reasonably quiet; although, getting going smoothly from standstill requires some getting used to as the light clutch has a very sudden bite. Also, considerable effort is required to change gears and slotting into fifth required plenty of guess work, too.

Easy drivability is a strength of this engine, with the turbo spooling up nice and early, letting you amble along in one gear. On the move you can haul the rev needle to the 4600rpm limiter if need be. The performance through that rev range is adequate, not exciting; no doubt, weighed down by the Hexa’s considerable 2280kg kerb weight. On the move the engine remains reasonably quiet till around 3200rpm.

Using Bosch’s ESP 9.0, the Hexa packs traction control, hill hold control and hill descent control. This combined with engine modes and on-demand all-wheel drive has allowed Tata Motors to offer drive modes – Auto, Dynamic, Comfort and Off-Road. For instance in Comfort, the sudden spike in torque is softened for a smoother drive experience, and the gentle responses are also used to help improve fuel efficiency. In Dynamic mode, the performance of the engine is unhindered and the ESP intervention is also delayed. While in other modes the all-wheel drive mode is engaged only when required with as much as 45 per cent of the torque being sent to the front wheels, in Off-road mode all four wheels get drive consistently. The ESP is also recalibrated in this mode to suit loose surfaces.

The combination that really impressed on our first drive was the one equipped with the automatic. The 6-speed gearbox, originally a GM design, makes the best of the engine character, shifting before the 3000rpm mark to make the experience all the more easy going. The shifts from the ‘box aren’t lightning quick, but in normal driving conditions it always seems to know what you want and hence feels natural to drive. In Sport mode the gearbox shifts down aggressively to keep the engine rpm in the 3-4000rpm range for maximum punch. You could even control the gear shifts by tapping the gear lever forward or back.

There’s no getting away from it, the way the Aria tackles bad roads is very impressive. The 19-inch wheels make short work of lightly broken roads. The way the recalibrated suspension shrugs off bigger potholes and ditches is shocking at first. Tata say that the use of multivalve dampers has helped the suspension tackle off-road better while improving ride quality, too. No doubt, you can feel that at work on our roads, too.

The chassis has also been made more rigid and this has helped tune the suspension better, too. The stiffer setup of the suspension at the rear has been done to make the Hexa more sporty to drive. What is apparent is that at highway speeds, it feels absolutely composed and does well to mask its size when being steered through traffic. However, if hustled hard you will feel the body roll, albeit in a controlled manner.

Disappointingly, the hydraulic steering feels light and vague at highways speeds. There is too much slack at centre and when turning into a corner, it ends up feeling disconnected and vague. Also, despite the disc brake setup all round, prodding the brake pedal inspires little confidence. It’s only when you push hard that pace drops as required. The Hexa could certainly do with more powerful brakes.

The Aria’s quite a capable machine and Tata has done well to build on its strengths while making up for its shortcomings. The Hexa’s spacious cabin with three rows of seats, its ability to shrug off bad roads, commanding driving position and easy driving manners make for a great machine to cover long distances in. Yes, it will be a bit cumbersome to steer in the city and fit-finish of the interiors could be better. Nonetheless Tata look to tackle the Mahindra XUV500 head on with the Hexa and if priced right, the Hexa has not just the manners, but the look and the appeal to make it happen this time around. Quite simply, the Hexa is SUV enough, rich enough and fresh enough to deliver an overall experience that feels quite welcome for those looking for a rugged three-row SUV.

Recommended Variant : Hexa XM
Was this article helpful Yes No
Sorry about that