Is the fuel-injected version of the Intruder worth the extra premium over the carb trim? 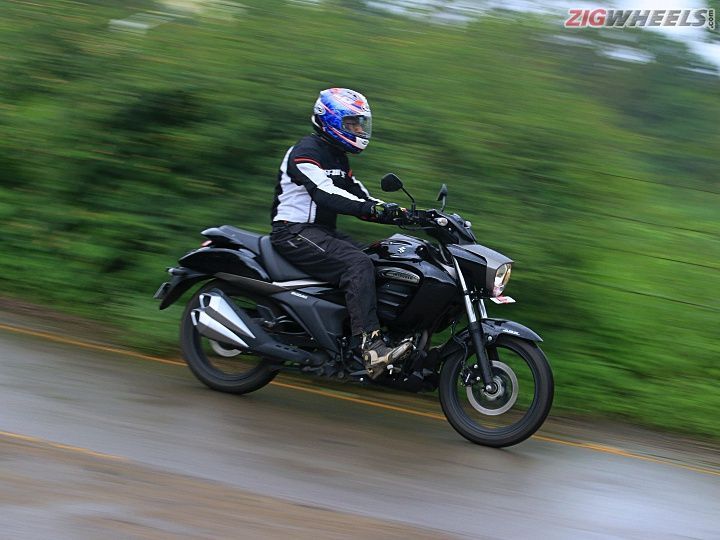 Suzuki launched the Intruder 150 as an answer to the Bajaj Avenger series which, for a long time, was the de facto choice in the sub-Rs 1 lakh cruiser market. While the Avenger comes in a 180cc and a more powerful 220cc guise, the Intruder gets only one engine option, but offers that in carburetted and fuel-injected forms. But the FI variant we have on test here carries a premium of almost Rs 7,000 over the carburetted variant. So, what exactly are you getting for that extra moolah?

We have extensively tested the carburetted Suzuki Intruder (Read road test review here) and except for the motor, it offers the same ride experience as the fuel-injected Intruder. Therefore, this review focuses on the fuel-injected motor’s performance and efficiency, and whether the figures are enough to justify the pricing premium.

The numbers:
The Intruder runs the same motor from the Suzuki Gixxer, but the FI variant gets the fuel-injection system that we’ve already seen on the Gixxer SF FI. The 154.9cc fuel-injected air-cooled single makes 14.8PS at 8000rpm and 14Nm at 6000rpm. And just like the carburetted Intruder, the FI variant also gets a larger rear sprocket for better acceleration. Now, while the power and torque figures are the same for both the carburetted and fuel-injected bikes, the FI is lighter by 1kg. So we can expect better acceleration figures, right? Yes and no.

The reason for this is that the Intruder FI feels tuned to deliver better response in the low to mid-range, but misses out on a bit of top-end pull. During our acceleration run, we had to shift to fifth gear to cross 100kmph and the lack of top-end power makes the Intruder FI lose time.

It gets more interesting in the roll-on tests. In the 30-70kmph test in third gear, the FI clocked a time of 6.96 seconds, 0.84 seconds slower than the carb. In the 40-80kmph run in fourth gear however, the FI clocked 8.47 seconds, 0.05 seconds quicker than the carb. These contradictory figures again are down to the way the motor makes its power. In the 30-70kmph run, third gear allows the motor to rev up faster and get past the powerband, leading to slower figures. The 40-80kmph run in fourth gear has the motor spin up at comparatively lower rpm, allowing it to stay in the powerband, leading to better acceleration.

Suzuki seems to have chosen this particular state of tune for the FI powerplant in order to achieve better fuel efficiency. In the city, the motor has sharper initial throttle response and the mid range allows good tractability. At speeds of 50kmph, it stays in 4th gear with the tachometer reading 4250rpm. This allows it to return a city fuel efficiency of 50kmpl, 2.4kmpl more than the carburetted Intruder. We won't term the motor as super tractable, but there’s enough tractability here to get the job done without fuss.

On the highway test cycle, the Intruder FI managed 57.8kmpl when ridden in top gear at speeds of around 70kmph and the tachometer hovering around 5000rpm. This figure is 3.8kmpl more than that of the carburetted variant. Also, at highway speeds, the Intruder feels refined. But overtaking at those speeds does require downshifting a gear or two.

Overall, the motor feels quite refined than its carburetted counterpart. It seems to carry a relaxed state of tune which trades in a bit of top-end performance for more fuel efficiency and almost no vibes. In fact, you do not feel any vibes, only a buzz from the footpegs at the very top of the rev range. And it seems to rev more freely as well.

Ride and handling:
Dynamics remain identical to the carburetted Intruder. It is based on the Gixxer’s platform with a few modifications to the frame. Despite being designed like a cruiser, it handles as well as a small sporty naked. It is quick to turn in and it’s surprisingly easy to scrape footpegs in corners.
Just like the Intruder’s good handling can be attributed to the Gixxer’s frame, it also inherits the Gixxer’s stiff ride characteristics.

That said, the Intruder FI we got had a more supple ride compared to what we had experienced on the carburetted bike. This, we suspect is due to the rear monoshock’s preload being dialled down to a softer setting. Now it isn't easy to adjust the rear suspension preload as the adjustment ring is hidden behind bits of bodywork and the subframe. Any change here is best left to the service centre.

The riding position is upright due to the handlebar being positioned closer to the rider but the footpegs’ forward set position means it is a reach for shorter riders. While taller riders might not complain about the foot controls, they surely will about the seat. The rider seat is angled down towards the tank and a taller rider will inadvertently sit back, putting pressure on the tailbone. This can cause a lot of discomfort while riding long distances. Other than the seat though, we liked the way the new setup was adept at handling most bad surfaces without transmitting the shocks to the rider.

Just like the carb Intruder, the FI too uses the Gixxer’s brake parts with a single channel ABS as standard fitment and as such mimics similar traits under braking. While the brakes have a strong bite, the rear wheel does tend to lock up under hard braking. Thankfully, you can trust the front ABS in these situations.

Design:
We aren't particularly fond of the way the Intruder looks. But the polarising design seemed to attract a lot of admiring glances and questions with many mistaking it for a 250-300cc motorcycle. The plastic panels seem to hold well with no rattling or squeaks you’d expect, considering it’s got over 20 odd plastic panels bolted on to it. Just like the Gixxer SF, it is almost impossible to tell the carb and FI models apart on looks alone. The only visual change between the carb and FI Intruder is a small fuel-injection badge on the handlebar shroud. One niggle we had with the Intruder is that the headlamp stays continuously on when the ignition is switched on. If left unattended, it can drain out the battery. A ten-second cutoff for the headlamp, or the headlamp switching on only when the engine was running, would have helped.

Summing it up
Suzuki has quite a strange pricing strategy for its products. The price difference between the Gixxer SF FI ABS and the carb Gixxer SF ABS is just Rs 3,830. The price difference is substantially higher between the carb Intruder ABS (Rs 99,995 ex-showroom Delhi) and Intruder FI ABS (Rs 1,06,896 ex-showroom Delhi). Moreover, at this price, you get the same bodywork and graphics save for a small FI badge.

The primary differentiator for the FI is how the motor feels, with some slight differences in the way it performs as well. It’s more refined, more fuel efficient and offers a better rideability in the city, but other than that, the entire ride experience is almost unchanged when compared to the carburetted Intruder. But honestly, the Rs 6,901 difference is a bit too hard to justify. However, if you have your heart set on the Intruder and don't mind paying extra for a bit more refinement and fuel efficiency, the Intruder FI is worth a look.