The Rapid now comes with refreshing new looks and a new 1.5 litre diesel, with a service package that makes it more appealing 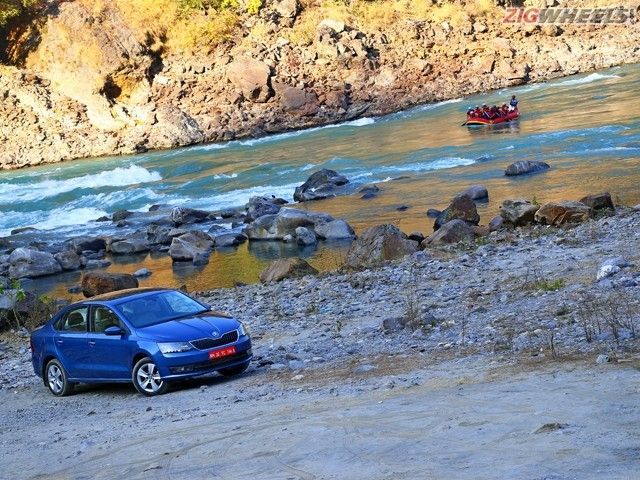 Now this is an update that has been a long time coming. The Rapid was introduced to our market in 2011 as Skoda’s answer to the increasing executive sedan market.  Since then, this has been the first major update for the Rapid. The one you see here receives updates in the form of a redesigned front and a new 1.5-litre diesel motor with other cosmetic changes.

It’s All In The looks

The Rapid was a good-looking car but at the time where models are refreshed every two years, its design had become quite dated. It is a good thing then as the new design focuses on straight lines than the curvy panels of its predecessor. While the Rapid looked like the sedan derivative of the Fabia, the new one echoes styling cues from the new generation Skodas, namely the Octavia and the Superb.

The changes revolve mainly around the front, where the headlamps, bumper, grill and bonnet are new. The new face, especially the grille, echoes the current signature design theme of the new Skoda family. The headlamp has a projector setup with daytime running LED lamps that shut down when the turn indicators are on, like the bigger Audis. The blacked-out theme with the chrome accents and LEDs give it that bejewelled look like the more premium Octavia. It also gets a fog lamp cover like its larger cousin. The front bumper is now wider with squared-off accents and a wider air dam that gives the car a sporty visage. While wheelbase remains the same, the length has increased by 27mm thanks to the revised bumpers.

While the body shell remains unchanged, the side profile gets updates in the form of a new 5-spoke alloy and new ORVMs with integrated LED turn indicators. There is a touch of chrome on the exterior in the form of subtle accents on the door handles and a chrome strip on the boot lip. The rear gets revised tail lamps that now feature a smoked-out effect and a larger bumper with a subtle spoiler on the boot. Overall, the new Rapid looks suave, like a scaled-down Octavia. The robust feel of the VW family continues to be experienced here courtesy of a galvanized body that is corrosion-resistant with laser welds used for exceptional stiffness. The Rapid gets an 11-stage paint job that gives the car a high-quality glossy sheen.

The interiors remain largely unchanged, with the focus being towards giving it an upmarket feel. On the inside is a fresher two-tone black and off-white colour scheme that Skoda calls Ebony and Sand. It gets perforated leather seats and a new 6.5-inch touch screen infotainment system (it is actually larger than the Octavia’s unit) that has an intuitive capacitive touch display but misses out on navigation. The plus side, though, is that the system gets Mirror link so you can pair your Android phones for navigation and a lot other stuff. The rest of the high quality interior remains unchanged. It does not offer the best-in-class space but is comfortable enough for long-distance jaunts. The 460-litre boot isn't the best either but gets a lower loading lip. It also gets sonar rear parking assistance.

The Rapid gets two choices for engines - a 1.6-litre petrol and a new 1.5 litre diesel from the VW family. The 1498cc four -pot common rail diesel puts out 110PS at 4000rpm and a healthy 250Nm of torque between 1500 and 2500rpm. Power is up by 5PS over the earlier motor while torque output remains the same. It is mated to a five-speed manual or a seven-speed DSG gearbox. Fuel efficiency for the manual variant is 15.41kmpl and 14.84 for the automatic.

Traditionally, the petrol variant is the sportier version but in the Rapid the petrol version seems tuned for comfort. The motor is refined with healthy torque delivered on the top reaches of the rev range. It is an eager motor and the manual is quite fun to drive with its slick gearbox that offer shorter shifts and a light responsive clutch that makes the car engaging to drive. There is also the option of a 6-speed Tiptronic automatic. A DSG box would make more sense here but would also drive up the price considerably. It is possible that Skoda might launch a 1.2-litre turbo petrol later and is saving the DSG box for that. The problem is that despite its eager nature, the 1.6 petrol mill feels like a dated unit overall if you compare it to the competition whose mills have higher levels of refinement and a more precise power delivery.

The suspension is tuned for comfort with excellent damping all around. Bad roads do not unsettle the car at the least but the trade-off is a floaty ride at high speeds. The feeling is exacerbated by a steering that lacks feel but is light and precise. Handling is quite good with impressive level of grip in corners and mild understeer setting in at the limit. The soft suspension means there is a bit of body roll in corners. The brakes have good bite but feels spongy.

The diesel, on the other hand, feels quite different to drive and is the sportier of the two. The 1.5-litre motor is a torquey unit with a good dose of torque spread across the rev range. Post 2000rpm, there is a good shove that tapers only near the redline. The DSG box is well suited to the engine and that makes driving easier and more engaging be it the city of the highway.

The engine-gearbox unit is a fantastic combo made even better by the suspension setup that features stiffer springs to compensate for the added weight. The overall damping remains the same. So you have a stiffer ride that does not bottom out on potholes nor does it make the ride jarring. The stiffness does wonders for handling, which feels sharper and more engaging. The steering too feels better with more feel dialed in owing to the weight. It also gets hill hold function with stability control. Overall, the diesel drives like a miniature version of the VW Jetta and is our pick of the lot. Both cars offer sporty driving positions and the steering is a joy to hold.

The biggest bugbear for Skoda has been that despite its Germanic build and high-quality components, their reputation has suffered due to the high cost of maintenance. The issue has been previous Skoda dealers charging customers outrageous sums of money for service and spare parts; an issue that Skoda assures us, has been addressed. In order to further enhance its image, Skoda is offering a four year service program for the Rapid for a one time-payment of Rs 29,000 and a four year/one lakh kilometres warranty, both of which should put your mind at ease.

The new Rapid has evolved into a car of many merits. It has a solid build quality, premium looks, high quality interiors, fantastic ride and a powerful diesel engine with the option of a DSG automatic. Safety is of top priority here, with ABS and airbags standard across the range. It does skimp on some features like a rear view camera or something as basic as an external boot opening button, but that will make their way on later updates. It might not be deal breakers but will surely be very irksome!

Prices for the diesel automatic start at Rs 10.06 lakh (ex Delhi) while the Petrol retails at Rs 8.78 lakh (ex-Delhi). The prices may be at the higher side compared to the Honda City and the Maruti Suzuki Ciaz and the competition may offer more features and space, but what you get with the Rapid is a feeling of premiumness and long-lasting solidity that is a cut above the rest. The diesel too is impressive and among the most involving-to-drive sedans in the market. The new Rapid is a car worthy of your attention if you are in the market for an executive sedan.