The WagonR sits between the most affordable cars of India and the more aspirational hatchback space. This segment has grown with the times and now features new players like the upmarket Santro and the feature-rich Tiago. Has Maruti added enough oomph to the WagonR to see it regain its crown? 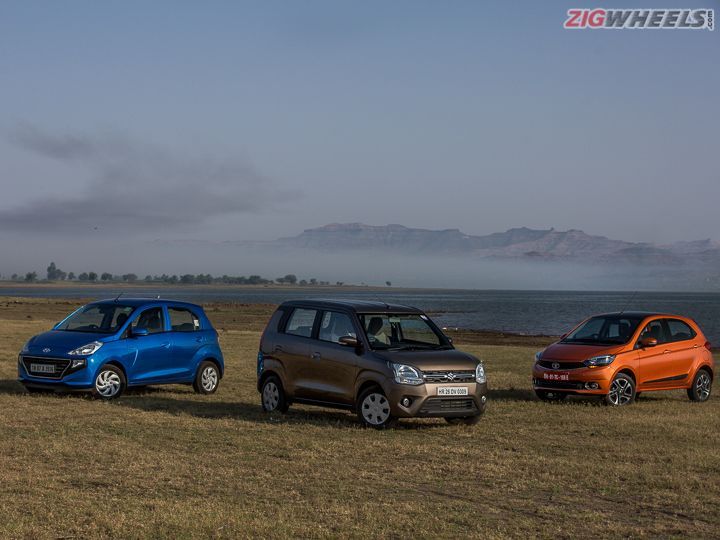 The Maruti Suzuki WagonR was the template for the budget conscious sensible hatch for the family that was neither too small nor too much of a stretch for the wallet. But our needs have changed - no-frills is passé. And so the cars in this segment have evolved. The Tiago offers you heaps when it comes to features and the Santro has brought a whole new level of quality to the budget segment. We have the petrol manual versions here to see which one delivers the essentials as a family car while catering to our new-age expectations and keeping the wallet happy too.

The Tata Tiago, it’s the one that pulls at your heartstrings - the sporty ones - it is the longest and the widest here for the right stance. Large headlamps on the sharp nose, sharp creases down the side and it’s the only hatch here with 15-inch alloy wheels in the XZ+ trim.

Sadly, Maruti hasn't gone for a more extreme Kei car look for the WagonR. Its edges have been rounded off and while it does come across as looking softer than the outgoing car, we wish it had some more character. It’s still boxy though and it has grown as well. It’s the tallest in this company and has the longest wheelbase too.

The Hyundai Santro is the cutie of the lot, especially in this blue. In terms of stance, it sits somewhere between the WagonR and Tiago. It’s not low slung but it’s certainly not a tall boy either.

The Tata Tiago strikes a nice balance and is our favourite in this grouping, but the biggest changes in this segment have taken place on the inside.

The feature list on these cars has grown longer. All three of them feature steering mounted controls, Android Auto and Apple CarPlay, 7-inch touchscreens and electrically adjustable ORVMs. And while electrically folding mirrors are offered on the WagonR, the Tiago goes one further with ones that automatically close/or open when the car is locked and unlocked.

The Tiago’s feature list is also the longest and it additionally offers climate control, drive modes, driver’s seat height adjust, adjustable headrests and a cooled glovebox. Yes, this Tiago XZ+ has the highest asking price at 5.77 lakh, but for that many additional creature comforts, it does justify it.

But there are some niggles like the touchscreen interface, which is a little laggy and slow, and with all this black in the cabin, the AC had trouble cooling down the cabin on a smelting hot 40-degree day. And while the design and layout of the dash are pleasing, the fit and finish of some of the plastics could be better. Take for example the air-con vents which feel and look very plasticky and creak when you use them. The glovebox lid was also not aligned on our test car.

When it comes to space, be it in terms of cabin width, legroom or seat comfort, the Tiago finds a pleasing middle ground of the three. But the headroom, or rather the lack of it, will bother taller occupants, and the all-black cabin makes it feel less spacious than it is. There's storage for 1ltr bottles in the back but the front doors can only fit 500ml bottles.

In terms of price, the Santro sits in the middle. But in terms of quality, it sits right on top - better than cars even in a segment above. The materials and finish are just wow. The infotainment experience is also the best with a nice snappy interface and Android Auto and Apple CarPlay connects the fastest here. It also offers some unique features like a reversing camera and rear AC vents. But then to save cost, Hyundai has cut corners - it misses out on one touchdown for the driver window, there’s no lane change indicator function, and the electrically adjustable mirrors don’t fold electrically. Yes, those might be minor misses, but the absence of tilt adjust for the steering, lack of seat height adjustment and separate washer and wiper functions, which have to be manually turned on one after the other, are no laughing matter!

Still, on a hot day like this, you will want to be a passenger in the Santro. It has the most effective AC and these rear vents help circulate cool air around the cabin the fastest. While this is the tightest for sitting three abreast, two adults would be plenty comfy. These seats have the right kind of cushioning and there's plenty of under-thigh support. The rake of the backrest is more relaxed than the other two and unlike the Tiago - there’s plenty of headroom here.

When it comes to headroom though, the WagonR is king. There's enough headroom for Khali or even Tushar and the beige interiors further emphasise that feeling of space in the cabin.

But when it comes to unique features over the other two, the only one the WagonR can boast of is the 60-40 folding rear seats. The WagonR does practicality the best. Everything from the door pockets, the storage spaces and the steering mounted controls are nicely designed and positioned. But more important is that there are no glaring misses or things we don’t like. There is no seat height adjustment but there’s tilt adjust for the steering and you can find a comfortable driving position easily.

One complaint with the WagonR, on a hot day like this, is the time the AC takes to cool down the cabin and that means you have to put up with the noisy vents for longer. While the side vents have no issues the central ones could have been larger, which would have helped them flow air into the cabin better and maybe even quieter too. We would have complained about there being only two speakers on offer, but keep in mind that the Maruti has the lowest asking price here. So you will have money to spare for genuine accessories.

If you must squeeze three adults into one of these three hatches, then the WagonR is your best bet, but only for short trips. In terms of seat sizing or knee room, the WagonR isn't the best. But the design of the front seats (lifted off the floor nice and high) lets you really stretch your legs out better than in the Santro or the Tiago. The WagonR also features a massive 341-litre boot, the largest by a big margin in this comparison.

Where Maruti has invested the most effort in stepping up the experience factor with the WagonR is in the engine. This 1.2-litre K-Series motor feels the nicest to drive. It’s quiet and it is the quickest too. Quick in a useful everyday way, in that you won’t feel the need for too many gear changes while commuting. And every time you do push on the right pedal, it will leave the other two behind. It’s also the most adept in the city with light controls and gears that slot in easily. What about efficiency? It’s a Maruti, so of course, it ticks this box as well and, you guessed it, it's the most efficient too.

The Santro packs the only other four-cylinder engine here. Like the WagonR, it's quite refined and even has an enjoyable, raspier exhaust note as well. But that’s as far as it’s sporty nature goes. It feels quite lazy in the city and if you’re just keeping up with traffic, everything is hunky dory. But for overtakes, or even just to close gaps in city traffic, the Hyundai engine requires a downshift as it feels sluggish under 3000rpm. Once out on the highway, things get better though, where speeds are higher and it’s easier to keep the engine spinning in its sweet spot.

The Tiago has the most powerful engine on paper but not in our measured performance tests. Even when driven back to back in the city, it’s clearly not as peppy as the WagonR. However, it feels a little more enthusiastic than the Santro, but that’s not saying much. The real miss is that its three-cylinder engine lacks the refinement of the 4s - be it the vibes or the engine rumble. The steering is quite responsive and makes manoeuvring through tight lanes and rush hour traffic a breeze. So it drives into the middle ground between the other two in the city and can hold its own against the Santro out on the open road.

The rough road champ is without a doubt the Tiago. Over bad roads, at any speed, the Tiago just eats potholes and speed breakers for breakfast. The quick steering and the larger wheels also give the Tiago a nice secure feeling on the road. But at city speeds, there is constant movement in the cabin over smaller imperfections and it keeps you from really relaxing while commuting.

The WagonR is the city slicker! It just glides over bumps and potholes at city speeds like nothing else in this segment. Even smaller bumps are ironed out almost completely! However, the softer setup means bigger bumps can be heard clearly and felt too at higher speeds. Out on the highway, remember to drive a bit easy to keep body roll in check. We recommend opting for better tyres for a better experience.

The Santro is best enjoyed with a light load, in which case it feels composed and comfortable too. It even delivers the best braking performance! But over broken surfaces, especially with a full load, it starts to feel bouncy and the rear seat passengers will get tossed around. It does flatten out better at highway speeds though.

When it comes to safety, all three cars get dual airbags, ABS with EBD, and rear parking sensors. The Santro is the only one to offer a reversing camera while the Tiago additionally features corner stability control as standard. Both the Maruti WagonR and the Hyundai Santro with dual airbags have scored two stars in the Global NCAP crash test, under the #SaferCarsForIndia initiative. The Tiago is yet to be tested.

So the Tiago’s dull performance, a shortfall in refinement from the engine, or the suspension for city use, keep it from matching up to the appeal of the package. In terms of features and design, it is enticing and packs in value too. And while it has the wow factor, and has the space and size for a family hatch, it will always be a heart-over-head decision for the young buyer.

The Santro has its own appeal, its build quality and quiet cabin give it a very relaxed and plush air. But, its less of a family car now and more of an upmarket city runabout.

In contrast, the new WagonR edges ahead but not because of its wow factor. No, Maruti has peppered it with just enough frills to keep it from feeling out of place in this class. It’s the WagonR’s substance then that lets it sneak in front. It is spacious and comfortable, economical and peppy, and though the city focussed approach of the WagonR may dampen its versatility, it doesn’t keep it from acing the sensible quotient and grabbing the crown.