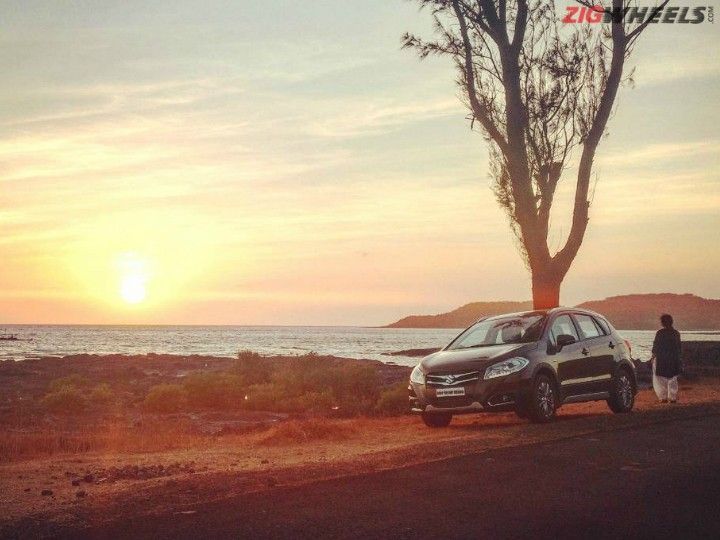 An accident was the final straw - our beloved Silky Silver 2004 Maruti Suzuki Zen (not the Estilo) needed a replacement. I had been trying to convince my family that we needed an upgrade - especially since the number of road trips we were taking was on the rise. In that particular instance, I am sure having ABS would have helped avoid the collision - the tyres locked up and I just rammed into the poor cow. Worry not, both the cow and Zen walked away from the accident with a few bruises (the repair cost, after claiming insurance, was Rs 10,119). I am doing fine too, thanks for asking.

Why the S-Cross? My mother wanted a 'long' car (a sedan) and I wanted a hatchback - this 4300mm long hatchback fit the bill better than any other car in the Rs 15 lakh (on-road cost, Pune) bracket. Yes, the Maruti Suzuki S-Cross is a glorified hatchback, not an SUV/crossover that most will have you believe. That long front overhang, 180mm of ground clearance and no off-road paraphernalia (be it mechanical or electronic) mean that it is best to keep the S-Cross on the tarmac as far as possible.

The car selected, it was time to choose the variant - it had to be the one powered by the 1.6-litre diesel motor developing 320Nm of peak torque. I knew from earlier experience that this would be better suited for the long trips I had planned ahead, as compared to the one powered by the smaller 1.3-litre diesel motor. Not only is its performance explosive, it is also a smoother cruiser at highway speeds; cover more ground and get higher fuel-efficiency - a win-win!

The past 12 years with Maruti Suzuki have also been a largely carefree period and that was a big reason why there was little hesitation in going for another car from their stable. The Nexa showroom felt fancy, but the buying process did not feel as special. On January 11, 2017, a spanking new (60km run) Caffeine Brown S-Cross 1.6 Alpha stood proudly in the designated delivery section of the Nexa showroom. A cake cutting and mandatory photo session later, the S-Cross (which is called the Brown Beauty) became a part of the family.

The initial impressions of the S-Cross are positive. On the outside, the S-Cross may not be a head turner but the glistening brown paint, large headlight units with projector units and LED guide lights, chrome trim and metallic-grey alloys do make their presence felt - it looks like a 'solid' car.

That understated but feel-good trend continues on the inside - the highlights here being the all-black theme with brushed silver accents, the (now Maruti signature) 7.0-inch SmartPlay touchscreen infotainment system, a chunky three-spoke steering wheel with ergonomically placed buttons for the multimedia and cruise control, an easy-to-decipher dual-dial instrument cluster with a large and informative driver-information-display etc.

The seating space has already been thoroughly tested, all five seats were occupied thanks to a 'show-off' session I had to undertake to help my mother impress her friends. Over a 100km trip to the Chinmaya Vibhooti, Kolwan and back (to Pune), the S-Cross was appreciated for its space, its quiet cabin, effective AC (even though there are no vents for the rear passengers) and the generally smooth ride. On a two-man extended-weekend run to Diveagar, the S-Cross' 353-litre boot felt like a black hole swallowing matter - I threw in a couple of buckets just because I could. I wish the glove compartment was bigger, it is surprisingly small.

On a working-weekend trip to Goa (yes, it is true I was working), the comparatively long stretches of highways allowed me to check out the highway efficiency of the 1.6-litre motor, along with the effectiveness of the cruise control system. The highest DIS-indicated mileage I achieved during the trip was around the 21kmpl mark - the overall efficiency (tank-to-tank) achieved was 18.9kmpl. The 1.6-litre motor has a big chink in its armour, the turbo lag under 2000rpm - and that is most noticeable in the city or when you are forced to do a standing start on an incline. In the city, this turbo lag results in you either falling behind traffic or looking like a speed-crazed maniac (as you regularly downshift to counteract the lag): in both cases, your fuel-efficiency will drop - the worst I have recorded till date is 13.14kmpl.

The first service, conducted at 1,000km/1 Month consists of a basic overall checkup - you will end up spending a maximum of Rs 30 (as I did) if you agree to buy a windshield wiper fluid sachet from the service centre. I expect the engine to perform better once it is back from its second service, which is at 5,000km/6 Months - this is the first time the engine oil will be changed, and other mechanicals checked/adjusted.

Apart from the turbo-lag, the S-Cross also suffers from other issues. Why Maruti chose to not make the LEDs in the headlights work as DRLs is puzzling, the metal used on the body panels seems to be very prone to denting and some of the body panel gaps are surprisingly large. The number of small dings (open parking, birds dropping stuff as they fly over) is worrying. The Zen has run over 1 lakh km and seems to not be as susceptible to dings. A number of stone chips also seem to suggest that the paint is quite thin; Nexa offers a 3M paint protection package at the time of buying the car at a cost of Rs 9,600. The JK Tyre Elanzos that the S-Cross came shod with from the factory are adequately comfortable and grippy but tend to squeal without much provocation.

By the way, I have not been able to let go of the Zen, I use it for intra-city trips. The S-Cross is driven on weekdays to the office and on longer outstation trips - stay tuned for more updates.