Honda’s latest entrant in the rather crowded 160cc space certainly looks the sharpest, but the specifications are more in line with a daily commuter. Does this formula make it suffer an identity crisis, or has Honda managed to cook up a unique recipe? 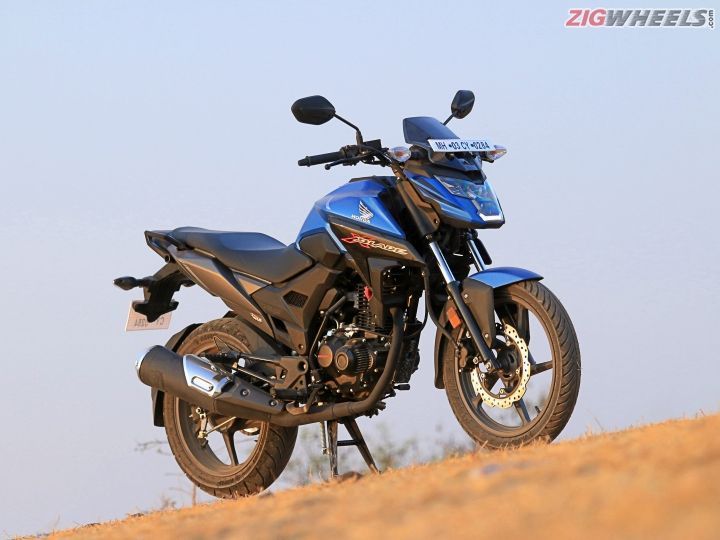 Bikes are often considered an extension of one’s personality. But if you were looking for a sensible yet slightly powerful commuter, you only had the rather “uncle-ish”-looking CB Unicorn 160. And if you wanted something more appealing, the likes of the Hornet, NS 160, Gixxer and the Apache RTR 160 became performance-oriented. Not to mention, they asked for a lot more moolah as well. The Honda X-Blade then stands to resolve this dilemma by being a smartly dressed commuter.

Where does it stand?

The X-Blade looks sharp. A big part of it lies in the headlamp design. It has a sharp-edged glass area which Honda says mimics a robo-face. And with the headlamps on, it even pulls it off. Even the cowl has a sharp line running along the side and then a fly screen, which too has multiple lines and angles.

The X-Blade looks like it was designed during the appraisal season, where everyone wanted to show their best work. As a result every panel on the motorcycle has different lines and surfaces, making it the most complicated design in the entire 160cc segment. Take for example the fuel tank, the tail or even a simple part like the sari guard, which for some reason has 3 different plastic parts. Every single area has been over designed. Even the tail light’s LEDs kinda looks like the Bat-symbol and is called the ‘Razer Edge Tail Lamp’. And... even after all of this, someone in the design team decided to throw in contrast colours and faux carbon fibre elements on the body.

But, somehow, and surprisingly, Honda has managed to pull it off. The bike, rather than looking cluttered, looks futuristic and striking. It even looks more aggressive than the CB Hornet! And even with so many different pieces coming together, the fit, finish and build quality is impressive. Well done, Honda!

Runs in the family

While Honda has designed new bodywork for the X-Blade, it has sensibly borrowed the hardware from the other 160s in the family to keep cost in check. So, parts like the front forks, 80/100-17 front wheel and the 130mm rear drum brake is borrowed from the Unicorn. And bits like the 276mm front disc and switchgear are from the Hornet. The rear monoshock too is the same one that you get on both the Unicorn 160 and the Hornet. But it misses out on both CBS and ABS, which is present on the other bikes, respectively. Even the fuel tank capacity remains the same as the other two at 12 litres.

While all of this is shared, the X-Blade does have some tricks up its sleeve. The LED headlamp is all new, and so is the tail lamp. But the most important of it all is the all-digital instrument cluster. It's a split unit with the top shelf displaying the rpm and the lower one showing speed, two tripmeters, odometer, fuel level and even a gear indicator, something which even the Hornet misses out on. And in place of the headlight toggle, you now have a hazard light switch. But honestly, we would have much rather preferred an engine kill switch. The switchgear quality is good and the buttons feel clicky. The 130/70-17 rear tyre is new too, and sits between the Unicorn and Hornet in terms of size.

Based on the way it looks, you’d expect the X-Blade to kick up a storm when it goes past you. But that's not the case. From the moment you get on the saddle, the bike’s commuter intentions become apparent. The seat is wide, with the cushioning on the softer side. The handlebars are also well set for reach and let you get into a comfortable riding position, though its slightly lower set nature might not appeal to everyone. Even the footpegs are not set too far back, and make for a less aggressive posture.

That said, it is not as laid back as the Unicorn, and the same can also be said about the way it rides. The power delivery is good in the low range and lets you get off the line easily. It feels strongest between 4500-6000rpm where the bike feels peppy, even more so than the Hornet. As a result, at 5.3 seconds, the bike is only 0.22 seconds slower to 60kmph than the Hornet. But more impressively, at 6.42 seconds, it is 0.26 seconds faster than the Hornet in getting from 30 to 70kmph in 3rd gear. This makes the X-Blade an able city dweller. Combine this with a slick-shifting 5-speed gearbox and it's a pleasant riding experience in the urban environment.

This experience is further enhanced by the refinement of the motor. It feels smooth and runs almost free of vibrations till the 9000rpm mark. Forget the Hornet -- it feels even smoother than the Unicorn 160's engine. After the 9000rpm mark, there are some vibrations on the mirrors and the pegs, but most riders are rarely going to find themselves in this zone. On the highways, it’s most comfortable doing 85kmph at 5500 rpm.

If you are patient, the bike will eventually reach its 11,000rpm readline, but power delivery only stays strong till about the 9,000 rpm mark, where the limiter ideally should have been.

Calm and comfortable, for the most part

Like the performance, even the handling is biased towards city use. And in that aspect, the X-Blade shines. At 140 kg, the X-Blade is the heaviest in the Honda 160 family, but doesn't feel like it. That's down to the lightness of the front end. It's easy to manoeuvre the bike in between traffic, and taking u-turns is also quite simple. But this lightness becomes a bit of an issue on winding roads. The bike is a bit too eager to tip into corners and doesn't provide confidence when leaned over. It won't be a problem at normal speeds, but don't expect it to feel as planted as the Hornet or the other performance 160s. This is also down, in part, to the front suspension. It gets the slimmer forks of the Unicorn and not the fatter 37mm diameter ones from the Hornet.

But the front suspension is beautifully tuned to take on bumps. It glides over bad roads, soaking all the undulations with utmost ease. In contrast, the rear feels a little stiffer in its stock setting. It ends up feeling a bit harsh on sharp bumps, and transferring those shocks to the rider. But all things considered, it offers a pleasant ride quality, which settles quickly after bumps, and for the most part remains comfortable.

The stopping power on the bike, though, feels lacking. The brakes have decent bite but desperately lack feel. The front disc still managed to convey some kind of feedback but the rear drum just seems wooden and happily locks up under hard braking. This wouldn’t have been a huge concern if Honda had offered ABS, or even CBS, but neither of them are available on the bike, even as an option.

We all like dressing up and looking smart, so why shouldn't our bikes? And that's exactly what Honda has done with the X-Blade. They aren’t trying to pitch the X-Blade against the outright sporty 160s such as the Apache RTR 160 4V, Bajaj Pulsar NS160 or the Suzuki Gixxer. Heck, it doesn’t even try to take on its own sibling, the Hornet, in terms of performance. What they have done is taken the sensible Unicorn 160 and dressed it up with hardware from the Hornet and bodywork inspired from the Transformers movies. And in doing so, they have come up with a bike that still stays strong to its commuter roots, feels quick enough, and at the same time, looks properly head-turning. The only miss here then is the lack of any kind of braking aids, which the current setup could have really benefited from.

The best part though, is the pricing. At Rs 78,500 (ex-showroom Delhi), it still remains within reach for someone who is looking to buy the easygoing Unicorn 160. And in our opinion, paying the 5 grand difference is worth it for the additional features, more responsive motor and the styling.